Taking pride in our GS community

Taking pride in our GS community 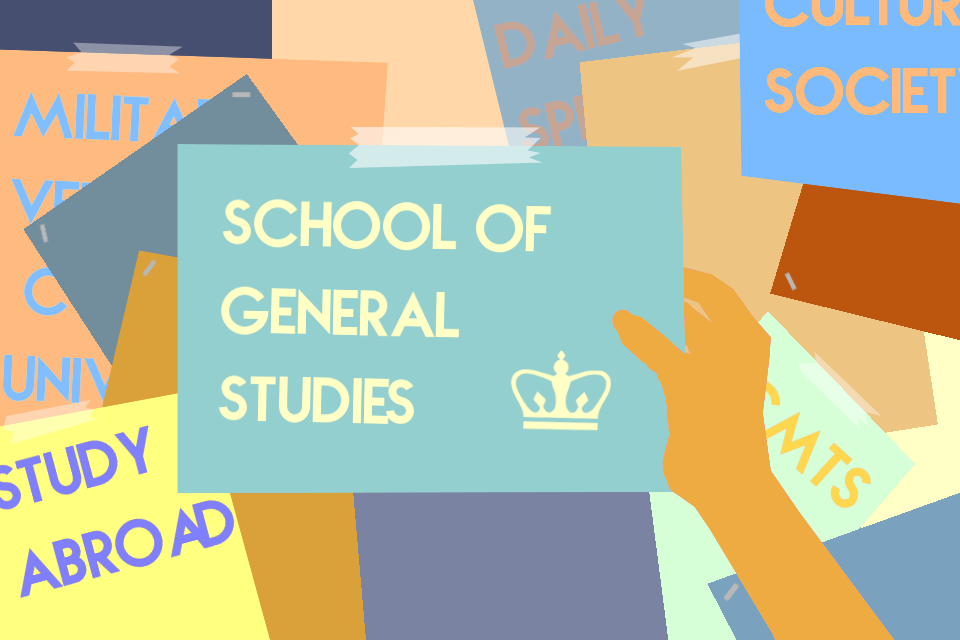 Just the other day, I was in the Office of Undergraduate Admissions, waiting to be interviewed for a tour guide position. I arrived a little bit early, so I passed the time in the lobby by thumbing through the Columbia brochures on the table next to me. Reading those fliers brought me back to my senior year of high school. I remember getting dozens of such pamphlets in the mail, all trying to sell me on their particular college. I always thought it was funny that in order to market themselves as the “best fit” for any student, these brochures all ended up sounding the same. They all proudly boast of their “world-class faculty” and “dozens of majors to choose from” so much that, eventually, nothing sounds unique to each school besides its location and name. Unfortunately, the same could be said about the School of General Studies brochure when compared to the other undergraduate colleges at Columbia.

Almost a year ago, I received a blue envelope in the mail with “The School of General Studies” written across the front of it. The flier inside spent a lot of space advertising General Studies’ “rigorous, traditional, Ivy League education” and the “Core Curriculum.” When read alongside Columbia College’s brochure, however, they say almost the exact same thing. The only unique aspect mentioned of General Studies is our full integration “into the Columbia undergraduate curriculum” as a school for “non-traditional” students.

Strange—if I were to choose something to highlight about General Studies, I would emphasize our unique community, one that truly accepts and accommodates students of all backgrounds and lifestyles. After all, this shouldn't be taken for granted—not all school communities (even within our University) are as inclusive as ours.

In August 2010, I left Virginia to attend the eighth grade at a private international school in El Salvador. By design, its students were supposed to be open and accepting of others. In reality, they were anything but.

As you would expect with attending a new school, I was understandably nervous, yet optimistic. I figured that, just like going to a new school in the United States, I would eventually meet people, feel more comfortable, and integrate into the community. Very quickly, though, I discovered that I was wrong.

I was supposed to be there for two years. I dropped out after six weeks.

I didn’t leave the school for any academic reason—in that regard, it was actually much better than anything I had been used to back home. Nor did I leave because I felt uninvolved; I quickly joined the track and field team, played club soccer, and even participated in theater. I left the school because of the students who—though they were fluent in English and knew I couldn’t yet speak Spanish—spoke around me as if they were oblivious to my existence. I left because only one or two of my classmates would even say hello and help me get around, though there were hundreds of others in the school. I left because of the constant alienation in the classroom, where teachers and students would expect me to keep up while disregarding the few students who only spoke English, the international school’s advertised language of instruction. I left because of the constant laughter I would hear when students, safe from behind the language barrier, saw me more as entertainment than as a classmate.

I left the school because, no matter what I did or how much Spanish I learned, I felt that I was never going to become a part of the student community.

Thinking back on it, I realize that the students weren't necessarily malicious—they were simply complacent. They never had to accommodate students who were different from themselves. Most of the kids had been together since preschool—they all spoke the same language, shared the same experiences, and had their own friends. They didn’t welcome new people, such as myself, into their community simply because they never had to.

What makes us different as a community here at General Studies is that we not only accommodate each other’s differences, but we expect them.

We expect that we all come in with different backgrounds and lifestyles, so we make the effort to listen, respect, and appreciate each other's stories. We know that many are here for as little as two years, or even transfer in during the winter, so we bring them into the fold as quickly as possible. It doesn't surprise us that many of our classmates struggle with balancing their studies, work, and families, so we help each other out wherever we can. We know that we all have forgotten a lot since high school, so we join each other in the General Studies Student Lounge for help with calculus and writing. Despite the fact that our classmates range from actors to janitors, from teenagers to quinquagenarians, from prep school graduates to guys who barely passed high school, we treat each other just like any other student.

In El Salvador, I knew within the first week that I was never going to become a part of that community. Here at General Studies, it took me the same amount of time to know that I had already done so.

Kevin Petersen is a first-year student at the School of General Studies, still trying to figure out the secret behind logarithms. Unlike his time in El Salvador, he plans on being here at Columbia for much longer than six weeks. Feel free to write him at kcp2129@columbia.edu, especially if you know of any good pupuserías nearby. Different Places, Different People, Different Perspectives runs alternate Fridays.