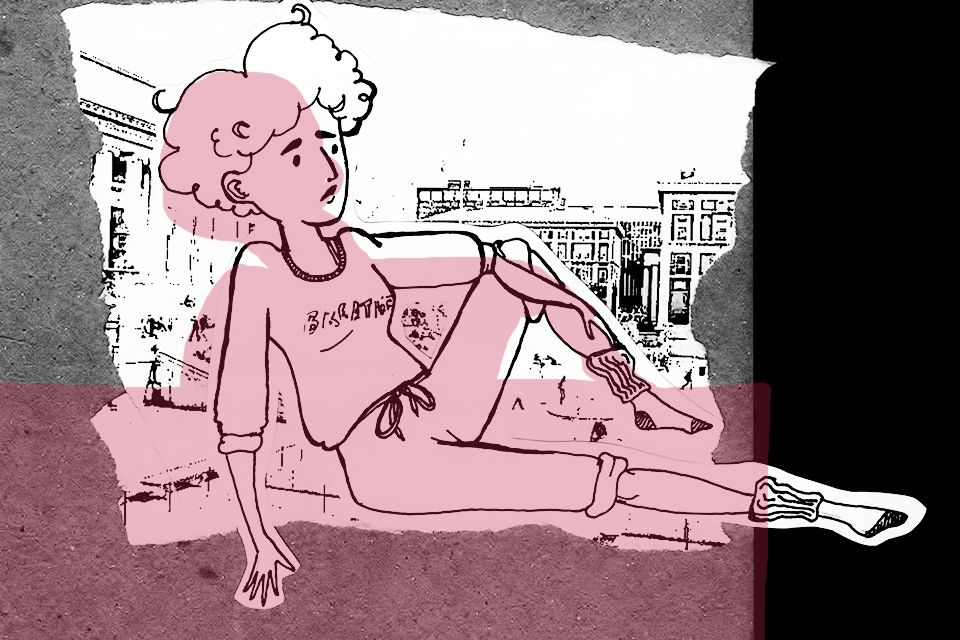 Living in New York, I am under a constant pressure to shrink. I hold my backpack to my chest on the subway. I shrink my body as much as possible when shopping in narrow supermarket aisles. I walk quickly so as not to block anyone’s route of efficiency. I’m under the impression that if I don’t mind my space, then my existence becomes a nuisance to others.

The same is true within the bounds of Columbia’s campus. I compress my shoulders to weave through crowds of brunchers in Ferris Booth Commons. I move my books to one corner of a Butler Library table so as not to hog the entire workspace. I make sure not to speak up too much in class so I can give others a chance to speak. Although this sensitivity to space can apply to all, it’s often a very gendered issue—women feel the need to shrink.

This semester, I’ve learned that the opposite of shrinking is dancing. Out of romanticization of and curiosity about the art form, I decided to take a modern dance class. Modern dance felt more accessible than ballet because it allowed for more freedom, more flow. At the same time, it was something foreign to me.

On the first day of class, I felt self-conscious. My body had never been a tool for communication. Rather, it was something I had to minimize in order to peacefully coexist with others. As light leaked into the mirrorless studio, I stood with my arms crossed, nervous to trust my own body weight during unfamiliar falls and handstands. My fear of getting in the way of others translated into my body language, and I struggled to occupy space.

Immediately, my teacher instructed us not to cross our arms over our chests while she spoke. When a majority of us shifted to our second most comfortable stance—holding our hands in front of our waist—she instructed us against that pose too: “It may not seem like it, but those poses give off the impression that you’re closed-minded to learning. Body language means a lot to dance teachers.”

For several weeks, I remained cognizant of this, trying not to cross my arms, and I found myself taking up more space. It felt unnatural. As the class went on, my teacher explicitly demanded that we take up more space by reaching farther and jumping higher. It’s easier to correct big movements than small ones, she explained, and overdoing it is much better for learning than underdoing it. For some reason, I’ve always been more afraid to overdo it. I never realized that underdoing it was a worse way to be incorrect.

Not only were we encouraged to fill gaps of space in the room, but we were also forced to be aware of the space our peers were taking up too. The studio felt packed, but when we learned to take heed of where others stood, it made it easier to understand our own movement. The lack of mirrors forced us to use each other for guidance, leading to heightened spatial awareness. Not only should we take up space ourselves, but we should also applaud others when they do the same.

Columbia needs to encourage this philosophy everywhere: Taking up space and overdoing it helps us learn. Although this concept applies to everyone, it especially applies to women who are often further conditioned to shrink in crowded spaces. Stretching ourselves a little too far is more beneficial than refusing to risk anything at all. It’s okay to take up space in unfamiliar settings because that’s how we grow. This is how we should approach joining clubs we’ve never had experience with before. This is how we should utilize the Pass/D/Fail option. This is how we should greet each other, make friends, and foster relationships: largely and unapologetically.

Last week, I sat on Low Steps with a radiant friend, admiring how the sun made her cheeks glow. My legs were shamelessly womanspreaded over four stairs, and our conversation was one of the most dynamic ones I’d had in weeks. We spoke about taking up space, and she confided in me, “Before every test, I find a desk in the library and spread my things over every inch of the space.” This is her show of dominance in understanding the material. This is how she overdoes it, because overdoing it helps her absorb information and gain confidence.

It’s beautiful when people, particularly women, are “too much”: doing too much, thinking too much, and feeling too much, all things which are unjustifiably feared on our campus. Taking up too much space is the physical way to demand our worth. Rather than expect everyone around us to shrink, we must take heed of other people’s expansion, and we, too, must expand.

Katie Santamaria is a sophomore in Columbia College studying nonfiction creative writing. Catch her womanspreading on the 1 train on days she feels especially empowered to take up space. Tell her how you really feel at kks2155@columbia.edu. Wholesome Content runs alternate Thursdays.