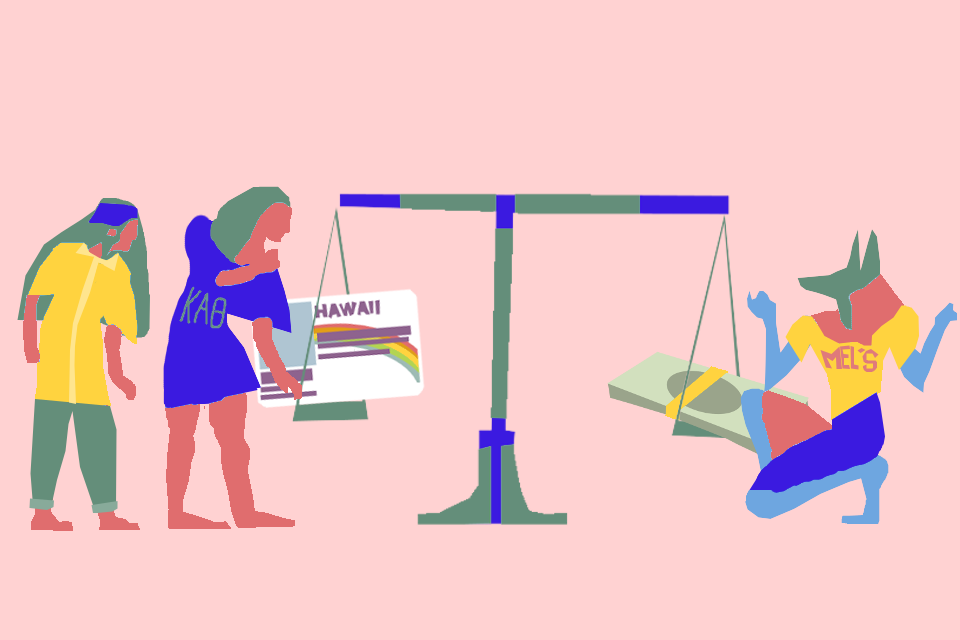 Let me make one thing clear from the start: I hate Mel’s. Let me also make another thing clear: I go to Mel’s all the damn time. That’s because vitriolically detesting Mel’s is integral to the entire Mel’s experience. If that sounds counterintuitive, that’s because it definitely is. Let’s unpack that.

The reasons I hate Mel’s are as arbitrary as you would expect: Waiting in line to get in is a major bummer, sports are stupid, and everyone there is the absolute worst.

Waiting in the line outside of Mel’s is like waiting in line at the Ferris pasta station—why am I wasting my time on something that I’m not even going to enjoy? But instead of chowing down on a damp cardboard bowl filled with disappointing alfredo mush, it’s bumping elbows with a bunch of sweaty sophomores memorizing the addresses on their tape-over fake IDs. At least the Ferris “pasta” provides some nutritional value.

Usually by this point, I see the Koronet Pizza sign shining out like a beacon of hope above the drunken masses and decide I have to escape. Unfortunately, I only have around a 40 percent success rate when it comes to convincing my friends to ditch the line and get pizza (on a completely unrelated note: I am currently seeking new friends... interested parties please inquire below). This means that more often than not, I stick with my friends and descend into Mel’s.

This brings me to my next issue with Mel’s: I hate sports. Every time I go to Mel’s, there’s either some sports game playing on the TV, or worse—a gaggle of student athletes harmlessly socializing. It makes me sick. Yes, I understand the appeal of sports as a concept—go team, let’s win, score some points, the other team sucks, etc. But if I wanted to give a single shit about that crap, I would not have come to Columbia. It’s as simple as that.

Once you’ve braved the line and decided that you can stomach sports, you’re inside Mel’s and somehow everything is just as terrible as you expected. I mean, yeah, I’ll admit the mac and cheese balls slap. That’s just a universal truth. But that doesn’t make up for the fact that everybody who goes to Mel’s is just the absolute worst.

Every time you go to Mel’s, you run into every person you know and it is literally! never! ever! the people that you actually want to see. Instead, it’s some rando from your NSOP group looking to reconnect over some witty banter about the one fact they remember about you from 2015. Bonus points if they somehow find a way to bring up their SAT score again.

It’s nothing personal. Okay, maybe it is a little personal. I didn’t even know that khaki pants and boat shoes were still a thing people wore. It’s like every guy in Mel’s is dressed like he just got back from some WASP-y boarding school church service, except he’s also kind of sweaty and unbuttoned his top three shirt buttons to show that he’s #cool.

Or worse, you bump into someone from a class you took many moons ago, and have to try to squeeze every ounce of conversation out from that one stupid-ass class that you both had in common. They ask you, “How have you been?” and you spiral trying to figure out how to articulate the last 18 months of your life in as few unengaging words as possible. “Stressed!” you say, disingenuously laughing and nodding and backing away slowly. They scream back, “OMG, same!” over the sound of drunk frat boys screaming the lyrics to “God’s Plan.”

You could very well claim that the reasons I hate Mel’s are easily applicable to any other campus bar in the area. And you’re totally right: I’m a hypocrite. I guess it all comes down to the fact that in my Columbia career, I have received so many “u at mels rn?” texts that the mere mention of the bar sends me into panicked flashbacks of my past spiked-milkshake-fueled mistakes.

Because if I am being completely honest, hating Mel’s is probably the most fun part of going there. Considering the many people, places, and things that I harbor an intense rage for— Columbia, Ted Cruz, misogyny, voter suppression, the Hamilton third floor women's bathroom, boys who have ghosted me, boys I have ghosted, the TA that keeps emailing me that my number of discussion section absences is dangerously close to the automatic fail limit—Mel’s is the least emotionally exhausting. And I guess that sweet, sweet concoction of angsty resentment without the damaging existential spiral keeps me coming back for more. There’s also definitely something to say about how much Columbia students love participating in the very social dances that they claim to actively hate. The masochism leapt out.

Anna Lokey is a senior in Columbia College studying philosophy. If you too enjoy waiting in the line outside of Mel’s for 15 tortuous minutes before succumbing to delusions of Koronet grandeur, drop her a line @analokay on Twitter. A Girl and Her Juul runs alternate Fridays.