A future for the union

A future for the union 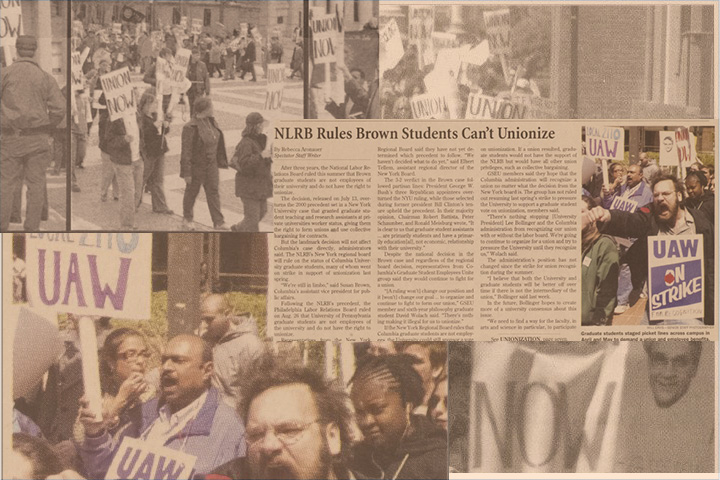 Administrators must now sit down with grad students.

This summer's National Labor Relations Board ruling denying Brown's graduate students the right to unionize is undoubtedly a victory for Columbia's administration. But it is a bittersweet victory, because it resolves none of the issues that drove hundreds of the University's teaching and research assistants to go on strike last spring.

Ideally, these issues could have been resolved years ago through dialogue and compromise. Columbia has had numerous opportunities to show that while it may not support the formation of a union, it does support its graduate students. In a recent interview with Spectator, University President Lee Bollinger put it this way: "The University and graduate students will be better off over time if there is not the intermediary of a union."

In any case, the Brown decision now provides an opportunity for a new start Instead of viewing the decision as a vindication of the administration or as a conclusion to the conflict, the University should use it to begin anew.

We disagree with the NLRB ruling, and we strongly condemn Columbia’s tactics in handling the situation over the past year. Even Bollinger has admitted that Columbia needs “to find new ways to discuss [the] needs and desires of graduate students.” We’re not sure what that means, but we hope he makes good on his promise. It is incumbent on him to reach out to all Columbia graduate students, especially those who led the strike last year and who have been snubbed by the administration for so long. And reaching out is not enough; he must make a good faith effort to meet their legitimate demands. If he fails, last semester’s strike will have been only the beginning of even greater turmoil.

This op-ed was originally published on September 9, 2004.