After two years, one voice

After two years, one voice 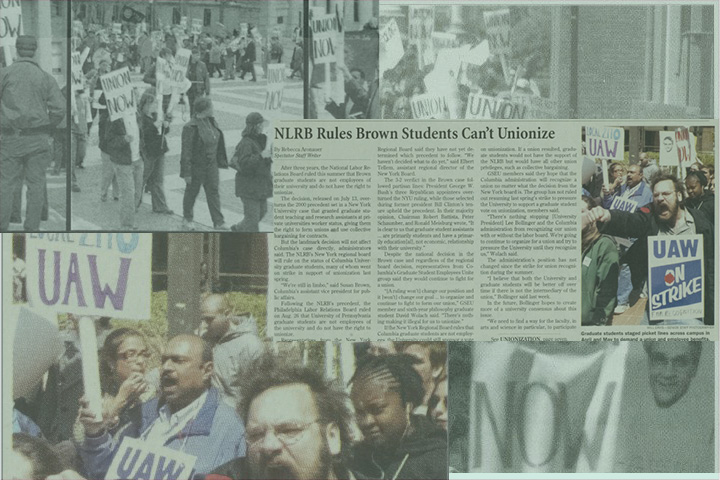 The ongoing debate over graduate student unionization is not about higher wages, or better benefits, or whether or not graduate students can simultaneously be students and employees. What the debate is really about is 1,900 teaching and research assistants gaining a voice in a university that has systematically silenced them for years.

Columbia could not function without its graduate student employees, who work in laboratories, teach Lit Hum, and provide countless other services. They are much more than students getting educational training, as Henry Pinkham, the dean of the Graduate School of Arts and Sciences, has alleged. They are paid by the University for their efforts, and as such, they should be able to negotiate with their employer on an equal footing over issues like health and safety standards, disciplinary policies, equitable salaries and benefits, and housing.

At this crucial juncture in the process toward unionization, Columbia must stop ignoring the needs of one of its most important constituencies and allow graduate students to form a union. We believe that the Graduate Student Employees United is thoroughly justified in its decision to strike; the University has left them with no other option.

For more than two years, this has been nothing less than their legal right. In February 2002, the National Labor Relations Board affirmed that Columbia's teaching and research assistants are legal employees and have the right to form a union. For more than two years, Columbia has done everything in its power to keep its graduate students from claiming their lawful rights.

It's been a long two years. In March 2002, right after the NLRB decision, graduate students did what they were—and still are—entitled to do: they voted on whether to unionize. Unfortunately, no one knows the results of that vote; the ballots were impounded when Columbia, in a last-ditch effort to stop unionization, appealed the NLRB ruling, seeking better results from the Bush administration.

The decision to strike starting on Monday followed a number of less drastic tactics. GSEU, the graduate student pro-union organization, has held peaceful demonstrations and rallies on campus. It has brought political pressure onto the administration. Last spring, it organized a two-day rally to "Free the Ballot Box." Throughout it all, Columbia has refused to negotiate.

Now, GSEU is asking Columbia to drop its appeal to the NLRB and recognize, based on a recent count of union authorization cards, that a majority of graduate students desire a union. They believe a strike is the only remaining tool that can force the University's hand.

We regret that it has come to this. Have no doubt: this strike will cause chaos. Research labs will be inoperable, and dozens of classes will have to be cancelled —an unfortunate consequence because undergraduates, who have nothing to do with the dispute, will be hurt.

But if GSEU had not voted to strike, we fear that the University would simply have continued to ignore the demands of graduate students and deflate them with legal tactics and propaganda. In the long run, that is an even more serious offence than the disorder that will result from this strike. Columbia should face the facts: the movement toward graduate student unionization is not going away. Every day that the administration fails to acknowledge GSEU’s legitimacy is an insult to the men and women who make this University work.

This staff editorial was originally published on April 16, 2004.