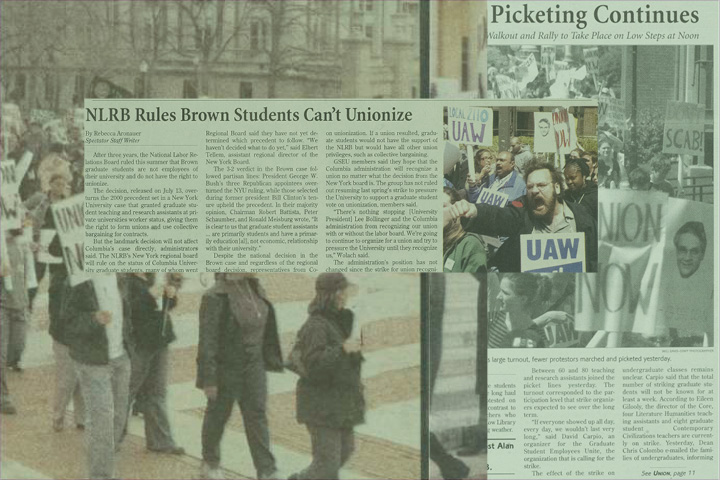 Despite the liberal orthodoxy that dominates campus life, unions have never come easily to Columbia. Without fail, every time a union has tried to establish itself here, the administration —every administration —has opposed them. Now Graduate Student Employees United, preparing to vote on a weeklong strike, are facing this same opposition. Although a one-week strike won't win them union recognition, it will make a valuable statement, and it deserves undergraduate support.

Unfortunately, the energy that drove the graduate student unionization movement last year has dissipated. During that strike, administrators deferred action, claiming that they needed guidance from the National Labor Relation's Board. Last summer, the NLRB, controlled by Bush appointees, ruled that federal law does not protect students' rights to form unions.

Which is exactly what the administration wanted. President Bollinger has a history of working with graduate student unions at the University of Michigan. While a professor, Provost Brinkley expressed support for unionization. Now, unless the government forces these esteemed members of the liberal establishment to permit unionization, the odds that they will do so of their own accord waver between non-existent and slightly more non-existent.

They know that union workers, on average, make about a quarter more than their non-union equivalents, and that unionization would give graduate student workers a powerful institutional voice in the University. They also know that, from their perspective, neither of these consequences would be good things.

For everyone else, however, they would be very good things. Although they have risen substantially over the past decade, graduate student workers' stipends often don't cover the cost of living in NYC. As a reward for their low pay, they get to work an absurd number of hours in cramped offices. Columbia does not even provide childcare benefits to graduate student workers with children.

A unionized student workforce could compel Columbia to reassess its staffing priorities. If the University had to pay teaching and research assistants a living wage, it might force them to spend more money on hiring full professors. Grad students, who currently teach half of all Core classes and assist in two-thirds of the courses offered in the natural and social sciences, would be free to spend more time on research, allowing them to graduate earlier. Newly-hired teachers could handle administrative duties now foisted on an ever-smaller pool of professors. Not incidentally, undergraduates would also receive an outstanding academic experience.

A one-week strike will bring renewed attention to these important issues. It won’t change the world. But it’s a start.

This staff editorial was originally published on March 31, 2005.