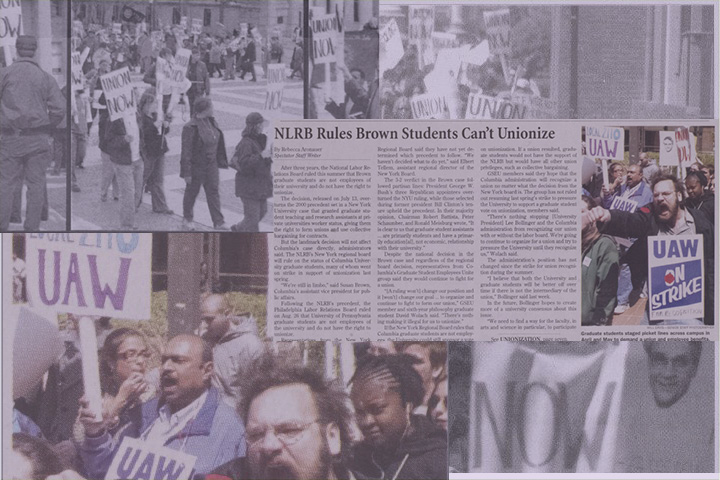 As the weather begins to warm, students flocking to bask on the sunny steps should recall that this time last year, the quad was filled with the rallying cries of many of Columbia's graduate students. This year, however, the silence is deafening. The decision by Graduate Student Employees United not to strike is troubling and indicates that the Columbia administration's anti-union tactics are indeed working.

While the debate at Columbia has cooled, GSEU's counterpart at New York University has continued the struggle to regain a union contract. Many of NYU's graduate assistants have been on strike since November 2005. As the strike continued into the spring term, NYU's administration announced that the strikers would lose their stipends for a second semester. Simultaneously, the administration announced that graduate assistants would be required to teach a smaller number of courses. This carrot-and-stick approach is being used to lure graduate students back to work and end the strike.

The relationship between the efforts at NYU and Columbia is obvious, and in the past it has led to benefits for both groups. Union status at NYU yielded improved working conditions for graduate student workers at both schools—from increased stipends to guaranteed health insurance and a dental plan. At the same time, Columbia's refusal to recognize graduate student workers as a union while increasing their benefits demonstrates how the administration will undercut unionization efforts at all costs.

The struggle should include not just graduate students, but also non-tenure-track adjuncts, whose abysmally low salaries are appalling. While admittedly difficult, if GSEU wants to obtain union status on Columbia's campus, it will require the support of adjuncts, upon whom the University heavily relies.

If Columbia’s GSEU is serious about gaining union status, it must also realize that its fate is intertwined with its counterpart at NYU. Solidarity in the struggle for union status is important—and in this case, the cause of the strike is a symptom of a greater problem. Throughout academia, a culture of disrespect among administrators toward both teachers and students has led to frequent clashes between the two. In fact, the need for a union stems from administrators' preoccupation with running the University as a corporation, and not as an academic community. Unfortunately, what emerges from this commercial attitude is a legitimate need for a union among graduate student workers. With the administration’s subtle anti-union campaign gaining ground, campus is too quiet for its own good this spring.