Peace at the eleventh (therapeutic) hour

Peace at the eleventh (therapeutic) hour 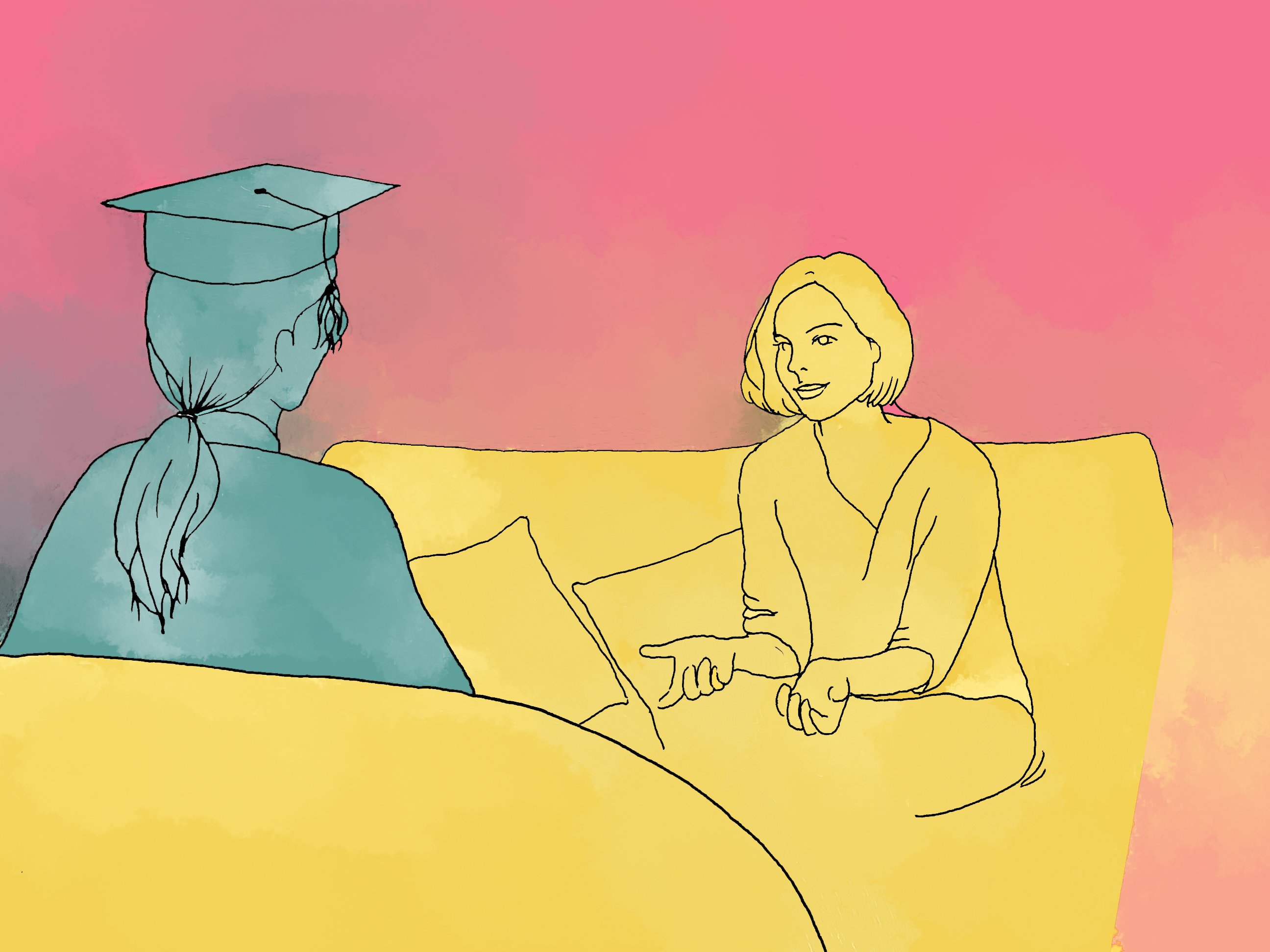 So I’m graduating this coming May, which is thrilling and unfathomable; apparently, graduation is this single day that splits all of time as I conceptualize it into before and after. In before, I live on various cozy blocks around Morningside Heights, crank out a bachelor’s degree, and understand each day as a single tick on an ultimately finite timeline. In after, I’ve moved to anywhere other than New York, somehow totally invented a life for myself, and developed an informed opinion on 401(k)s, or something.

All the no-school, not-New-York, no-freaking-clue anxieties aside, graduation signals to me a much more daunting change: I’ll have to stop seeing my therapist. It’s not complicated; she’ll be here, and I’ll be not-here, in another of life’s radical gear shifts. More unsettling than permanently leaving behind my favorite professors or hella University resources or a campus shared with 10,000 people is having to end treatment, known as termination in the biz, which does actually feel as harrowing as it sounds.

Saying that my therapist helped save my life is hardly an exaggeration; the ever-ongoing process, which has granted untold stability, is the work I’m proudest of in college by far. It has made after possible. So I’m panicked: How do I march confidently forward into after at all without the glue that held before together?

The two—ending college and ending therapy—aren’t totally unrelated. A heaven-sent financial aid officer informed me the summer after my first year that I was eligible for a need-based grant to enroll in Columbia’s health insurance plan. Having to stay on my very-out-of-network government-provided insurance from home left me effectively without coverage my first year, since I couldn’t spring for what I called, in both awe and jealousy, the “superhero” Aetna insurance plan (with its Herculean price tag).

Having this magical grant meant having real insurance, and having real insurance meant that going to a doctor now just cost the copay, which meant I could sort of afford regular therapy—something I’d given up hope of having in college after learning about Counseling and Psychological Services’ small-and-finite-number-of-sessions-per-student policy.

I am grateful and proud to report that I’ve taken full advantage of my superhero insurance. I’ve seen my now-therapist twice a week since I was visited by my financial aid angel, almost three years ago this spring. The copays have always added up, but I mentally budget them like grocery money—an expense in support of good health—because the benefits of therapy have always added up, too.

Grieving-in-anticipation-me is bitter at how graduation signals these good things leaving my physical reality. I stubbornly wonder if it would be less painful to never have known them at all. I keep getting mad at my therapist for being so wonderful, because the wound I imagine her absence will leave already seems too deep. I wonder if it was irresponsible of Columbia to pluck me up by my eagerly raised hand—from a promising but resource-scarce situation—and plop me here, among wealth and worldview so foreign, only to kick me out after four years. What’s left? A killer ability to skim a text and a sixth-sense understanding of the subway system?

The conclusion I always draw is that my education is hardly over just because I won’t go to class or therapy appointments anymore. It’s not about accumulating stuff—knowledge, perspective, mental stability—but developing the ability to accumulate stuff. My therapist, and our work, is also there in my head; I can keep “seeing” her after we stop meeting in real life, when I keep building on all the progress we made together.

That I was at the (fortunate and generous) mercy of Columbia financial aid to have insurance at all—to even potentially get serious help—was never far from my mind. When I consider the very real possibility that the factors that got and kept me in therapy could have never arisen, or gone very wrong, I’m terrified. The hole that not having gone these last few years would have left seems frighteningly unfillable.

Yet I did go, a lot. Sometimes I wish I had a transcript for it, concrete proof I tried so damn hard. An academic transcript is like a well-marked college roadmap: I can remember my first A+, my first C, or that B- in Arabic I was so proud of, just by looking on SSOL. But you don’t get a record for emotional work. There’s no gold star for finishing the day—even if it seemed or was way harder to finish than other people’s days—let alone finishing tens and hundreds of days in a row.

The therapy transcript looks a little different. It’s creating and sticking to habits you know are healthy; it’s being able to take a potentially destructive thought or feeling or action, understand and honor it, and let it go without allowing the future to darken in its shadow. It’s being snapped at by a stranger on the subway and knowing not to hear exasperation or anger, but to listen for pain within, and then somehow being way less irritated when irritating things happen all the time.

Therapy has freed me up for constant renovation and innovation. Getting to the good stuff has also meant saying over and over, sometimes out loud and sometimes not: I need help; I need your help; can you help me? Like many Columbia students, I am proud and like being self-sufficient, so this I need help can feel like a surrender, an admission of less-ness. Implicitly saying I need help to pay for insurance to Columbia didn’t feel amazing, either. But it did work. Naturally, I am now an eager help-needer, because asking for help has only strengthened me.

In a way, that transition at Columbia has been the most wonderful surprise, from “I know” to “Dude, I really don’t know.” I feel more secure and confident in that not-knowing than I ever did when I believed that all things must “make sense” and “conclude.” These “endings,” then, and the feelings swirling around them, need hardly make sense at all.

To find out more about the resources available related to student health insurance, email ugrad-finaid@columbia.edu or call +1 (212) 854-5353

Harmony Graziano is a Columbia College senior who is stoked you read her column these last two semesters. She also knows that writing it was just another way of going to therapy, in the end, and hopes her therapist has a good chuckle over that one. If you wanna say goodbye, Harmony does too; you can do that at hmg2140@columbia.edu. The Bitching Hour ran alternate Wednesdays.