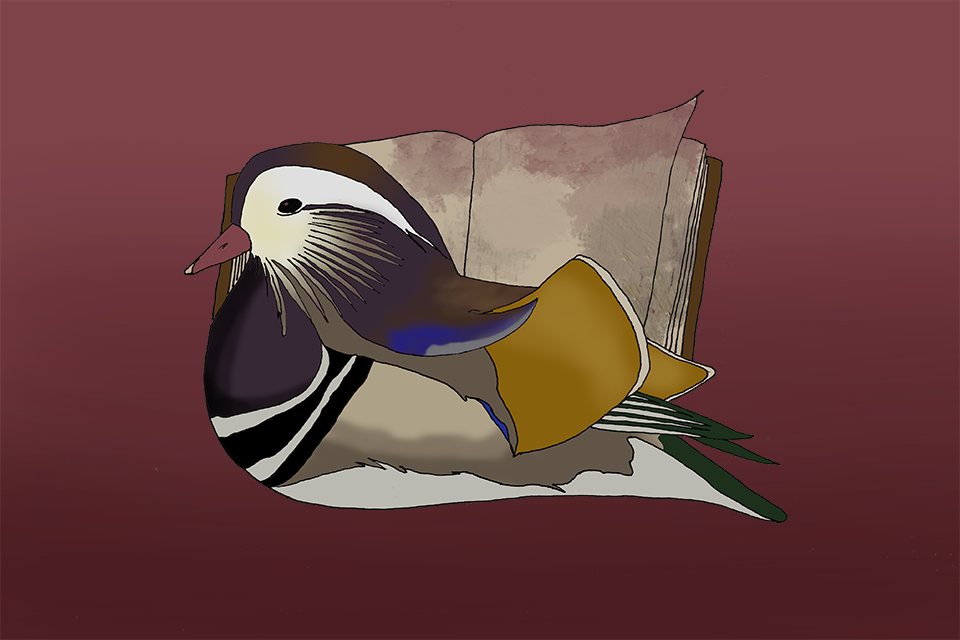 In my second year of high school, after finishing the Catcher in the Rye, my English class spent an hour discussing Holden’s fascination with the ducks in the little lake near Central Park south. The ducks serve as an almost lyrical refrain in the novel, dotting in and out of the dialogue as Holden himself weaves in and out of society, in and out of himself. They’re so memorable that they’ve engendered a series of articles about the actual ducks in Central Park. They also served as perfect Twitter fodder for the arrival of the mysterious and now mythic Mandarin duck last fall.

Let me just say, I adore this duck. It is absolutely stunning. I now follow the Manhattan Bird Alert Twitter to keep up with daily pictures of the Mandarin duck. I am wholly, unabashedly, irrevocably infatuated.

But mine is an uncritical infatuation, fueled by nothing more than visual and visceral joy at watching this iridescent, feathered friend scamper around the pond near Central Park south. It’s the kind of frivolous joy I haven’t really indulged in since high school, since before I was made to write a critical response to Holden’s fowl curiosity.

I’ve found it increasingly hard to write papers as I near graduation. What used to be a handful of hours practicing artistic and spontaneous bullshit has now become this endless tugging of ideas, this dragging, teasing effort to take something old—Dickens, Braddon, Tennyson—and make it pulse again with some artificial interpretive life.

I don’t want to go so far as to say that Columbia’s habit of academic rigor has made the exercise of academic writing (or reading) unpleasurable—rather the opposite. Now that I have relative expertise on a small intersection of Victorian literature and art, I find myself excited by the esoteric aspects of it, enjoying the masochistic pleasure of writing three separate essays on the same book in the same semester. But it has made the task of enjoyment altogether different. It has made a sort of innocent seeing almost impossible, as lenses of Freud and Foucault and Forster blur any attempt at untempered pleasure.

There’s a weight that accompanies the practice of academic rigor, and it’s a weight that latches on, invisibly, to the ways in which we process information. It’s a testament to our education that we often refuse to take things at face value, that we function as editors and critics of the world now, dissecting things into their component parts only to layer what we see with philosophical and historical filters. But it can be a kind of psychological burden of our education as well, bleeding into previously simple enjoyments, complicating them with layers of analysis. Or the opposite—when we manage to achieve pleasure without problematizing it, that pleasure becomes complicated by guilt or shame. How can you enjoy a snowstorm when it means thousands of homeless people suffering through the weather? How can you enjoy a Picasso if he bled the women in his life for art? How can you enjoy, well, anything without the crutch ignorant bliss?

This is not to say our education is singularly at fault—to get into a place like Columbia we certainly had to have had a predisposition toward critique, toward problematization. But I maintain that Columbia’s classrooms played a part in its cultivation—they did, at least, for me.

The process of critical reflection beyond the classroom is undoubtedly important and is kind of the point of a humanities education. And I will say, discovering the Shakespearean roots of the Lion King can absolutely imbue it with a different kind of pleasure. But when we can’t turn off this impulse toward problematization, when we feel guilt in enjoying the frivolous for its frivolity, when everything becomes a milkshake duck, well, that’s… not great. It’s exhausting.

We deserve—and indeed, should force ourselves—to enjoy things simply, to allow ourselves the pleasure of unfiltered, uncritical delight. There is always time, and I’m sure we will find it, for analysis and dissection. But there’s maturity in knowing when to let that fall away, too.

Just before finals last semester, I finally managed to make the pilgrimage to see the Mandarin duck in person. And it was lovely.

I am not going to make the visit a metaphor for beauty in the mundane, or even use it to advocate for seeking nature in times of stress. I am not going to turn this love of the hot duck into a birding hobby. I am not going to wax poetic on where the ducks go when it gets all frozen over. I am simply and unapologetically going to enjoy this weird duck.

Hannah Barbosa Cesnik is a Columbia College senior majoring in English and concentrating in art history, and is the former editorial page editor and staff director of Spectator. She recognizes this column now complicates her joy of the Mandarin duck by filtering it through the lens of discourse, and she regrets that slightly. You can tweet her @HBCesnik. The Tatler runs alternate Wednesdays.