EC is a death trap. Why do we continue to venerate it?

EC is a death trap. Why do we continue to venerate it? 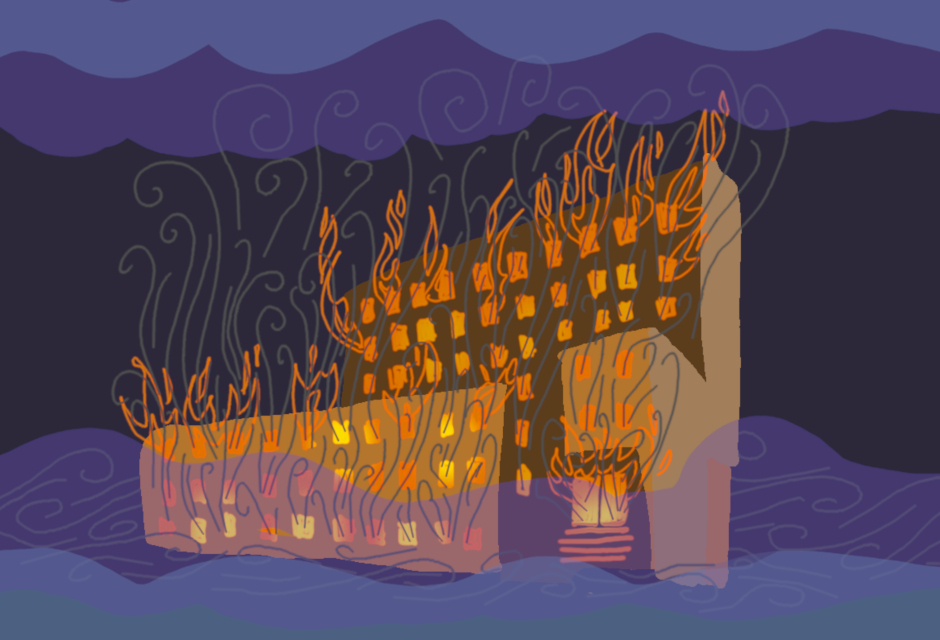 East Campus is a death trap. Living here is also dope as shit. Let’s unpack that.

Let’s be honest: EC is cool. It’s been the “place to be” from folklore dating back to NSOP times.

If you really want to have the #bestsenioryearever, you live in EC. The seemingly constant raging will give you enough social gratification to forget all of the times in the past four years when your academic workload pushed you to the point of insanity.

In contrast, the atrocities that occur to the damned souls who reside in EC are so numerous that it’s borderline ridiculous to think of all of them at once, because you’d feel like you’re living in some sick social experiment that tests the limits of human endurance.

Let’s review the past year of EC disasters: Hot plates took the place of our ovens and stoves, a mold infestation spread throughout the building for months, random fire alarms went off daily for weeks straight, and somehow all of the dryers broke over winter break. Maybe the dryers did what the grad students couldn’t do and went on strike indefinitely. I respect that.

“There’s no way it could really be that bad,” my mom said to me, the sound of her Juul rip crackling over the speakerphone.

“Yeah it is,” I said, choking on mold vapors and watching the ominous black stain on my wall slowly get bigger over the course of this 30-minute phone conversation.

The EC troubles started during the “era of constant possible death by fire.” Back then, the alarms went off so much that to this day I do not even flinch when they start and merely turn on Netflix subtitles, so I can keep watching peacefully while the siren blares for 30 endless minutes. I don’t even care if I die in a fiery blaze. It’ll be me and all the people in the townhouses who didn’t realize there was a fire until it was too late.

This semester, the EC laundry room has been out of commission. Is this allowed? Considering the fact that Columbia says I should only designate two hours a week to laundry and self-hygiene, I definitely don’t have time to take my laundry to a different building, or else I would have to skip my weekly shower!

I tried as hard as I could to wait out Laundrygate 2K19, but I ran out of swimsuits that could pass for underwear two weeks ago. So I threw my (giant) bag of laundry over my shoulder, grabbed a rusty shiv, and headed out of the building, ready to fight for my right to hygiene among the crowd of angry Wieners who were contemptuous over our encroachment. To fix this issue, Columbia provided some glorified shopping carts and told us to spread our laundry overflow between all the locations around campus where our little legs could carry us! That's a great solution. Especially for a dorm that is surrounded by stairs on all sides. Deantini’s beginner’s mind: so powerful sometimes.

In my stair-surrounded fortress, the sheer act of ordering delivery gives me recurrent stress nightmares. Imagine me running to claim my bacon cheeseburger deluxe somewhere along Morningside Drive, slipping on the icy bricks in Wien Courtyard, and lying there wondering when oblivion will consume me. I’m asking seriously here: Whose idea was it to have a dorm with no usable street address? In this economy?

The reason that I am ordering delivery in the first place (other than the fact that I’m lazy) is that it’s literally impossible to make a home-cooked meal on a goddamn hot plate. It deadass takes 30 minutes to boil water. By the time I’ve finished cooking, I've already snacked so much that I’ve completely lost interest in the fruits of my excruciating labor. But the same could be said about the amount of time I spend waiting for my delivery to arrive. You got me there.

The casual removal of any actual cooking appliances from EC is a great example of how Columbia Housing consistently turns a blind eye to the ways in which its negligence imposes classist barriers. Making it incredibly difficult to cook a budget-friendly and nutritionally-valuable meal disproportionately disadvantages low-income students. Ooo baby! This tea is piping hot. Must have just come out of the microwave.

Despite this horrifying list of atrocities, I still feel an incredible rush of dopamine when I push through the drunken masses of Barnard first-years desperate for a sign-in on a weekend night, swipe my ID, and go appreciate my sick view. Sick because of the mold.

When the EC plague began, many questioned whether or not the building’s egregious flaws would cause a decrease in its popularity. My answer to that inquiry is that you should just ask any senior Ruggles suite about their housing lottery number last year. Exactly.

I don’t see how you can hate from outside the club. You can’t even get in!

The structural integrity doesn’t matter to us at all. That’s obviously not the reason that people choose to live here, in this sick hell that was hastily and poorly built. It’s because they want the cool factor.

We want to feel superior to others, so we ignore the painful side effects that this privilege might also bring. The same can probably be said about how we put up with this pressure cooker for the sake of some good old Columbia elitism.

The promise of an Ivy League degree (and the privilege that comes with it) is enough to motivate us to torture ourselves intellectually for four years and fully ignore any and all bodily or social needs. Secluding ourselves in the library for days at a time to finish an assignment has been so normalized that I casually remind my friends to bring a toothbrush to Butler, when I really should be convincing them to stay home.

It only makes logical sense that our “coolest” dorm is the one that inflicts the most pain on us.

Anna Lokey is a senior in Columbia College studying philosophy. She’s dropping hints that she lives in EC. Direct your fan mail, hate mail, or notices of expulsion to ael2177@columbia.edu. A Girl and Her Juul runs alternate Tuesdays.