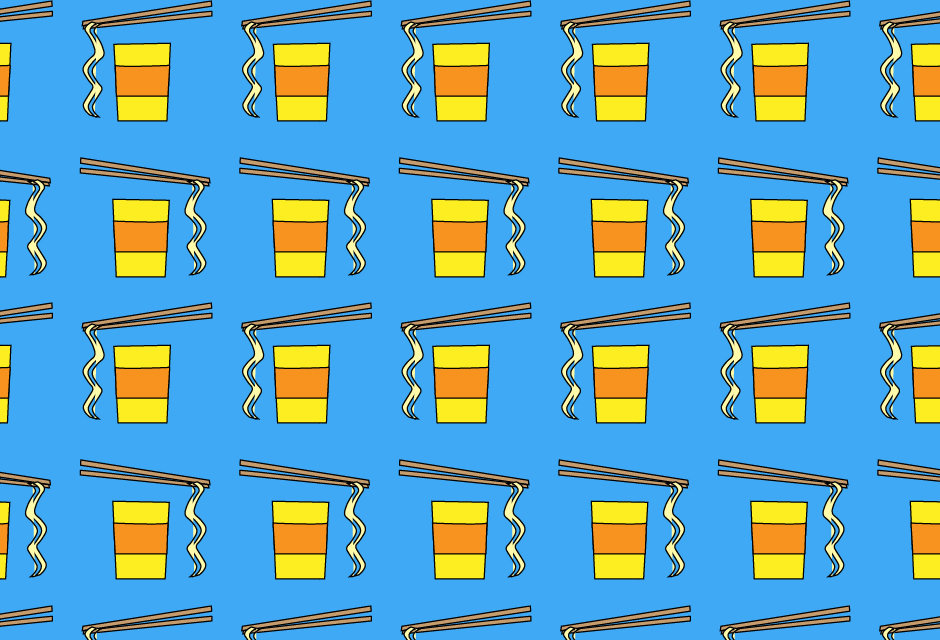 There are a few factors universal to the college experience, a central one being Top Ramen. Regardless of your ethnicity, socioeconomic status, or even dietary preference, there is a Top Ramen equivalent for you. College students seem to be the main supporters of this industry, relying on dried noodles to supplement their diet in one way or another, usually when in between paychecks or late at night in the dorms. For better or for worse this experience unites us, and participating in “Maruchan culture” is yet another part of the sadistic college experience—the same as pulling all-nighters or replacing all fluids with coffee during exam weeks.

Why is this food in particular so inextricably tied to campus culture? The answer is easy: It’s cheap. You’d be hard pressed to find a cheaper option in grocery stores nationwide. Regardless of your income level, this is one thing almost everyone can afford.

And yet, this almost universally accessible option lines the shelves of Columbia’s food pantry. Food pantries exist to provide items that poor people either cannot afford or would require taking money away from other crucial parts of one’s budget, like rent. Top Ramen fulfills neither of these categories.

Last semester, I bought a 36-pallet of Cup Noodles before I bought bed sheets. I knew, irrevocably, that these would be my fallback for meals as a poor student. I was eating them almost every week when I was hungry and was out of swipes or the dining halls were closed. Thanksgiving? Cup Noodles. Too bad there isn’t a turkey flavor.

Early on, I staked out Columbia’s food pantry to negate some of this reliance. At my community college, we had a food pantry that was open every weekday, stocked with nonperishables like granola bars, pretzels, nuts—basically anything that you could subsist on and not feel sodium physically running through your veins. Once a week there was a food share with fresh food and other perishable items, like bread, eggs, and large quantities of rice. I suppose I was spoiled.

In contrast, the Columbia pantry is about the size of two cubicles put together, with three walls designated to food. The biggest wall is populated with ramen. The rest of the shelves are scarcely filled, boasting delicacies like fruit cocktail and industrial-sized cans of pasta sauce. I started grabbing my old friend, Top Ramen, figuring I could take this opportunity to restock my supply. I was quickly stopped: “You only get three points for grains.” Huh?

The food pantry here runs on a point system: Fruits, vegetables, grains, and protein have a certain (low) number of points ascribed to them. Then, the foods on the shelves have a point value based on size. You can typically get 2-3 items from every category if you can even find something that you can eat.

Columbia seems intent on policing poor students in a way that they don’t apply to the general student population. On the many occasions when free food is offered to the student body, such as the undergraduate Super Bowl party last month, I have not seen an explicit limit to what you’re allowed to take. In my experience using programs designed for the poor community, people generally take what they need with the understanding that the rest will serve others. Some sociologists suggest that this behavior is especially true within the poor community. Perhaps overindulgence would be more of an issue if the pantry served a larger population of people, but both times I’ve been there I have been the only visitor. Oh, and did I mention they’re only open for two days a week?

Resigned to this system, I asked the volunteer to point me to the fruit section. She waved me over to fruit cocktail and some juice boxes. Juice boxes are a fruit?

I left with a jar of peanut butter and decided to never come back.

To clarify, the depressing state of the food pantry is not the fault of the students who volunteer for it, or the Food Bank for New York City, which runs our food pantry. Let me repeat that: The New York Food Bank runs Columbia University’s food pantry. Columbia doesn’t fund this food, and donations either come from the food bank or from people who choose to give donations. How many millions is our endowment again?

Columbia is taking resources from the impoverished population of New York City to feed its students. Columbia has a unique opportunity to combat poverty being that we’re located in one of the cities with the largest income disparity, and yet the University does not even glance at the poor students and poverty in our surrounding community. What kinds of students does this blindness attract? Certainly not poor ones.

There is a huge issue with providing nutritionally deprived foods to poor people. Increasingly, experts are discussing this more and more as the eaters of these foods grow older and acquire health problems like diabetes and heart disease. With the knowledge that poor people purchase these foods because that’s what they can afford, Columbia needs to do better. Our food pantry should primarily exist to support student health.

That being said, if you are in need of food, please go to the Food Pantry. It isn’t much and you might leave insulted, but hey, now I have a jar of peanut butter.

Melissa Cook is a junior in Columbia College studying English. Comments with as much sodium as Cup Noodles should be directed toward @makeshiftmelissa on Instagram or m.a.cook@columbia.edu. Her column, Pressure Cooker, runs every other Monday.