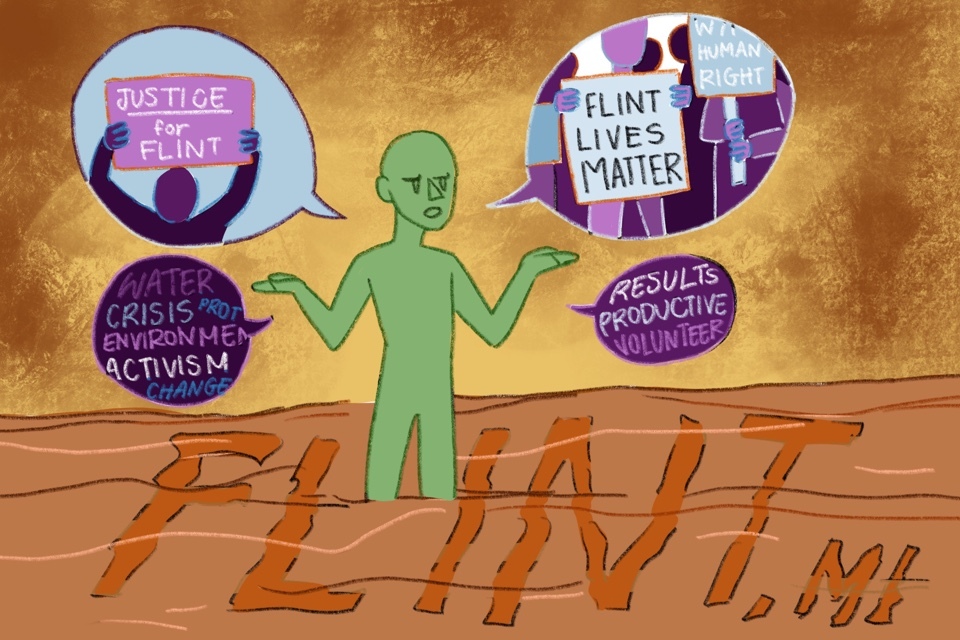 a time of intense difficulty, trouble, or danger.

Flint is in crisis.

At least that’s what I have been told for the past five years on my Twitter and Instagram feeds, on CNN, or by a classmate who mentions Flint in class to describe issues affecting “poc” to sound woke. But when I arrived in Flint, Michigan during spring break for a project that a few first-year students and I had been working on with the YMCA of Greater Flint, I didn’t see crisis. I didn’t see chaos. I didn’t see the tragic city without water that was unfairly targeted by environmental racism as I was told that Flint was.

Still, during our time in Flint, many of my team members were surprised by what they saw. They couldn’t believe the segregation of the schools. They were surprised by the conversations we had with the teens and adults. But most of all, they were shocked by how normal Flint was.

And that scared me.

It was a choice.

Flint’s population is over 50 percent Black and nearly 43 percent of its residents live below the poverty line, but it hasn’t always been this way. Flint was once one of the most prosperous cities in the United States. That is until General Motors began to shut down plants within the community in the 1960s, resulting in people and resources leaving the community as well. This caused Flint to become one of the most racially and socioeconomically segregated cities in the United States.

The water crisis in Flint was a choice made by its elected representatives to save on expenses and therefore poison its citizens, because the citizens’ lives were seen as expendable. It was their choice to continuously ignore that problem despite citizens explaining that they were being poisoned by their water. It’s a choice that could’ve been made in Houston, Dallas, Detroit, Ferguson, Baltimore, Philadelphia, Harlem or any other community like Flint across the country. It is a choice that could be made anywhere citizens are poor and Black because people simply wouldn’t care.

And this is why I was scared. I was scared, because I realized communities like my own, even when we feel ordinary, are always in a time of intense difficulty, trouble, or danger due to systems of marginalization that have affected Black people in the United States since the country’s inception.

Nevertheless, this information is seldom discussed when people talk about Flint. The people there are only discussed for their tragedy, as if they didn’t have lives before and throughout the water crisis. The issue is oversimplified, as if everyone in Flint was affected the exact same way. Every other issue that the community faces gets erased. It seems the “crisis” is only ever discussed to push an agenda, to make someone seem “woke,” or to silence others.

Congresswoman Alexandria Ocasio-Cortez used Flint to argue for the Green New Deal as if the water crisis was because of global warming and not a result of bad politicians. Whenever I see a tweet that says “Flint still doesn’t have water,” it’s often a response to something Donald Trump said or did. Citizens of Flint have become tools of rhetoric rather than the humans with needs, goals, and dreams that they are.

For some reason, we are constantly told our communities are always in crisis, yet no one—including at Columbia—ever seems to want to talk about why.

Flint is a community of people, and it is a community of phenomenal people at that. However, due to stigmas associated with the community largely as a result of dialogue around the water crisis, members of the neighboring municipality, Flint Township, have seriously considered changing their name to distance themselves from the area. We have reduced a community to one aspect of its history, and its constituents are willing to alter their existence to escape the stigma that has befallen them. So, before you tweet your monthly “Flint still doesn’t have water” reminder, you might want to step back and think about whether your words uplift and support anything other than your performance.

Colby is a first-year student (who recently transferred from SEAS to CC!) concerned with the stigmatization and tokenization of Black communities across the country. If you feel that he got something wrong, said everything right, or something in between reach out to him at colby.king@columbia.edu.