In search of lost time

In search of lost time 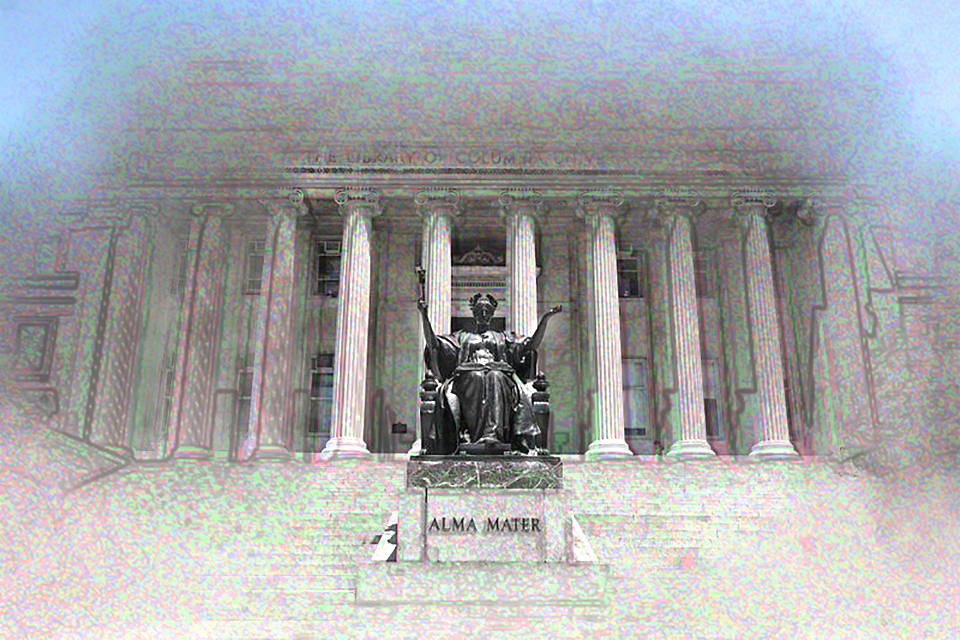 At Columbia, the foremost sign of spring is the clattering of bleacher construction. Like cherry blossoms, they bloom almost overnight and disappear just as quickly; when they’re gone, an entire class of students goes with them. Like bleachers, students are part of the architecture until they aren’t. The removal of rebuildable architecture always takes something with it; grass needs to be resodded, pavements repaved. Some of campus escapes the need for rebuilding; it endures in brick, stone, and archive. But so much of Columbia—and I’m speaking quite literally now—is lost every spring.

Memory is made by maintenance. But it’s hard to maintain institutional memory when an institution is constantly rebuilding itself. And it’s easy to forget that there’s memory to maintain at all.

Laid out like an ancient acropolis between iron gates, the strong-arm symmetry of the lawns and the Palladian permanence of Low Library suggest (in the way that good university architecture should) that nothing ever changes. It is a system which brushes up against eternity, where knowledge exists outside of time. This is, of course, nothing more than the patina of neoclassicism, a trick orchestrated by Charles McKim, William Mead, and Stanford White under the direction of Seth Low.

Walking to class, we don’t think about how comparatively young our campus is. It dates to about 1890. That’s roughly 130 years at Morningside—not even the halfway point of Columbia’s history, which begins in 1754. The real irony of Columbia’s myth of permanence is that the only enduring quality of any university is how indebted it is to institutional forgetting. If the incoming students don’t learn this anecdotally from other students, if they don’t deliberately seek out information themselves online, in the libraries, through WikiCU, they’ll graduate without knowing how young the stairs they climb really are.

Being a senior grants a small amount of perspective for how little the University changes. However, knowing even some of Columbia’s history grants the opposite, the knowledge of how much it has and continues to be in flux. Understanding the foundations of the present—both the newly erected and the longstanding—becomes crucial if we have any intention of building on what is here.

In 1958, the Report of the President's Committee on the Educational Future of the University claimed that "Any true university ... is both society's 'organ of memory' and also society's constructive critic.” This is what, in theory, makes a university education so valuable: Knowledge of society engenders constructive critiques and, eventually, effective societal change. But who guards the memory of the University itself? Who—to borrow from Plato—guards the guardians?

I was told, once, that Spectator’s Opinion pages are the archive of Columbia. It’s an attractive idea for someone like me, who’s spent the entirety of her undergraduate career in service of them. To read old op-eds is to inhabit, in 800 words, the mental and emotional space of the students who lived through different University epochs. Someday, even the pieces we scoff at may serve as a window into individual and collective memory.

But even the editorial page, as we understand it, only started at Spectator in the 1950s. That’s about 200 years of un-archived Opinion knowledge. The Spectator Archives as a whole prove a more convincing concept—and a criminally underused resource—but even those only span back to 1877. Throughout 1884, Spectator seems to have run a regular series on the early history of Columbia. How baffling is it to think that in 1884, Columbia already had enough history to forget?

After almost four years, I’ve begun to feel like an accidental keeper of memory, carrying around the archival knowledge of a too-long Spectator tenure. Still, even the most archive-obsessed students pale in comparison to the administrators and professors who have spent the better part of decades not just absorbing knowledge of Columbia but participating in its various eras. To some extent, this is not only necessary but also unavoidable. But the way that institutional knowledge at Columbia is largely held by those in power creates a kind of imbalance where students who want to impact the University are inadvertently distanced from knowledge of it.

Put another way: How do you feel about the University Senate—if you even understand what it is? Is it effective? How do you know?

In 1969, Columbia restructured its administrative governing systems in order to effectively incorporate student and professorial input in University-wide policy decisions and prevent a repeat of 1968. An offshoot of the spring’s strike committee, Students for a Restructured University, proposed a number of measures; among them, a governing body with equal representation and equal voting power between students and professors. The senate currently has 63 faculty, 24 students, six officers of research, nine senior administrators, two administrative staff, two alumni, and two librarians. Should we continue to call it a representative body? (Neal Hurwitz, CC ’66 and co-leader of Students for a Restructured University, doesn’t think so.) Moreover, according to the official guide to the University Senate, “trustee concurrence is required in matters involving a change in budgetary appropriations, acquisition or disposition of real property, and contractual obligations of the University.” What does it mean that the only representative governing body (if we even agree that it is representative) can be vetoed by the trustees?

Judging institutional progress becomes impossible if we don’t have an understanding of what we should be judging it against. What is lost by forgetting is—in the most reductive sense—power.

Institutional memory is not just collective memory, it’s collected memory—for it to serve any purpose, it has to be explicitly addressed. We’ve begun to curate crucial parts of it (the Columbia University and Slavery project, for example), but as far as I can tell, if our problem with institutional memory has been talked about more broadly (and I’m sure it has), it hasn’t been recorded.

I can’t write a 265-year-old institutional memory in 900 words. But if we can begin building a conversation on this column that won’t be taken down by May, then that’s a start.

Hannah Barbosa Cesnik is a Columbia College senior majoring in English and concentrating in art history, and is the former editorial page editor and staff director of Spectator. She hopes very much that WikiCU starts up again. Tweet her @HBCesnik. The Tatler ran alternate Wednesdays.