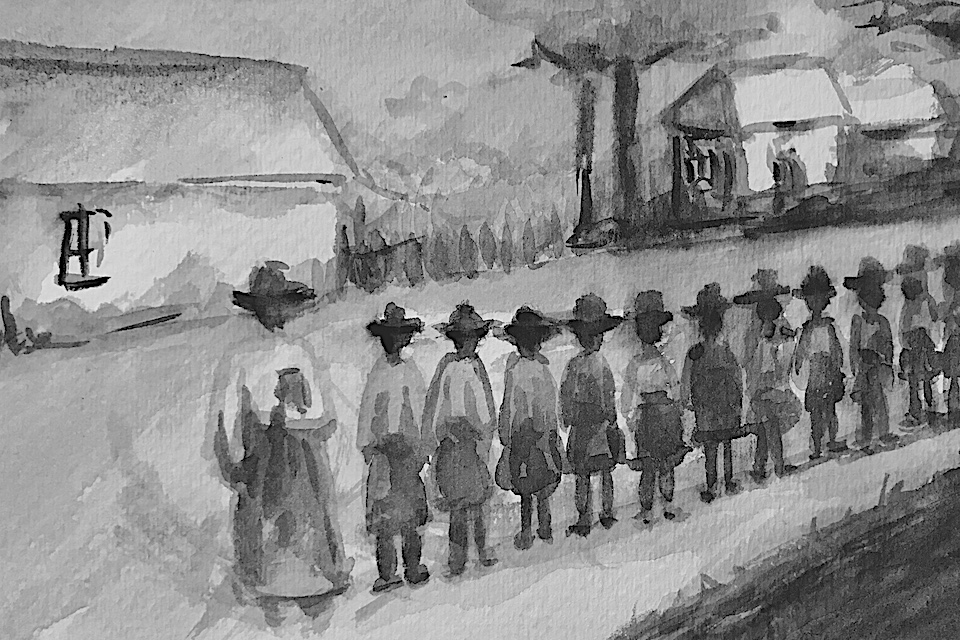 “To exist on this campus is a revolutionary act” was something that I heard a lot as an underclassman. But as an upperclassman, I can tell you that my existence here isn’t resistance—it’s self-interested complacency. I probably repeated the idea that my existence was revolutionary as much as I heard it as an underclassman. In the tide of emotions following the 2016 election, and the racial injustices of police brutality and systematic oppression, I found myself firm in one thing: that my only solution was to be a revolutionary. I wanted to fight for a more ethical system shrouded under mountains of Marxist theory that I barely read, even when it was required for CC. Revolution to me looked like an end to police brutality and racial discrimination, the attainment of full equality for LGBTQIA+ individuals, and economic equality. So, firm in my belief of revolution but lacking any theoretical or critical framework, I and many of the people around me set out to be ethical—economically and socially in ways that just weren’t allowed in our current economic system. Still, we cursed the University, the city, and the country for not caring enough.

We wanted to show we cared by organizing in leftist spaces, and still, throughout my first two years I heard and repeated the idea that just my existence at Columbia was a revolutionary act. But it was not, and still is not, revolutionary in any way—and quite frankly, it doesn’t have to be. In being black on campus, your presence is not innately revolutionary because you’re black. Our place here is included in the prevalent system, so that the system can be validated as working because there are some black people succeeding. And one of the wildest things about believing in a built-in revolutionary quality is that no one criticizes you on campus—a lot of the time solely because you’re black. In lots of left-leaning spaces where non-black people seek to center black voices, it comes off as if they're scared to contradict us. Ultimately, this serves no one's personal growth. After discussing critically what it means for me to be here at Columbia as a black person, I can honestly say that I am here because I want to have some type of (financial or social) stability in the rest of my life that I didn’t have growing up. That’s a choice based solely on me. It’s something that I indulge in when I dream of a future with a nice house, clean kids, a good retirement plan, and a Volvo SUV.

And that’s not revolutionary. That doesn’t spark ideas of the revolution for anyone. It’s the dream that capitalism has sold me for years: that I can have this idea of comfort and stability as long as I work hard and use the tools around me—my degree from Columbia being one of those tools. Columbia is supposed to help even the playing field, but an even playing field is just a dream. It will never be completely even because as it evens out for me, it becomes distorted for another girl just like me. The idea of full equality is one we will never get our hands on, as long as we continue to rely on dreams to navigate our future instead of changing our reality.

But still, a Columbia graduate’s tangible reality is changed. I don’t know where I would be if it wasn’t for Columbia. I have gained so much from being here, but in my heart, there is a sinking feeling that there are still so many who haven’t gained the same things. They are taking different paths. Even if my dreams come true and align more with my reality, what real value does that have to anyone other than myself? I am just one girl from my neighborhood, and there are so many who deserve to experience all that I have. But still, I made the decision to be here out of self-preservation. And with that sinking feeling, I have pushed myself to be kinder to my selfish decision to be here.

After all, I didn’t construct the system that we live in. I didn’t make it so that Columbia became one of my steps to self-preservation, a step toward my dreams of stability. To give myself that credit would be to grossly overestimate the control that I have in the world. I am merely a participant, not the ruler; I had to realize that in order to feel more at peace with the distance growing between myself and my old neighborhood classmates. I think that every person coming from a low-income background should relish that kindness, give it to themselves and give it to those around them from similar backgrounds. You aren’t fighting for the greed that would damn your revolutionary aspirations. You’re fighting for the comfort that capitalism robbed you of.

So if you are poor and you come here to stop being poor, don’t apologize for it. I grew up poor in rural Georgia. I got my water from a well until I moved when I was six. I’ve gone hungry because I didn’t have the money to spend on food. And this semester, I am working 20 hours a week just to pay for medical and educational expenses. I am here so that I won’t have to live like this again, so that my children can have the stability to eat every night of their life, to always have clean water, and so that they don’t have to worry about being a worker and a student.

The reality, though, is that most people at this school do not come from economically unstable homes. Middle-class and upper-class people cannot justify that they are at Columbia for comfort instead of greed. How would they know what discomfort they were fighting against, if they have always been comfortable? If they have enjoyed the stability of their life so far, and they have the means to never experience instability, then I think it becomes personal greed. That’s different from seeking comfort in an economic system you have no real control over.

This brings me to my final point. You need to be confident in your decision to do whatever it is that you’re doing. It cannot be ignored that we have made a selfish decision to be structurally rewarded for coming here. We are here because we decided on a form of self-preservation that is not in any way revolutionary, and we need to be comfortable with that. Stop hiding under the cloak of revolution or leftist politics (especially for my pre-professional blacks). Be confident in what you are doing. If you are pursuing an economics major for the sake of finding your comfort, own that fact. If you just like money, just say you’re solely in it for the money and go. Revolution comes with discomfort and communal sacrifice; if you aren’t open to that, then you don’t have to say that you are. Be honest.

Sabina Jones is a senior at Columbia College majoring in English & Hispanic studies. Her column “Transatlantic Trade” runs every other Wednesday.