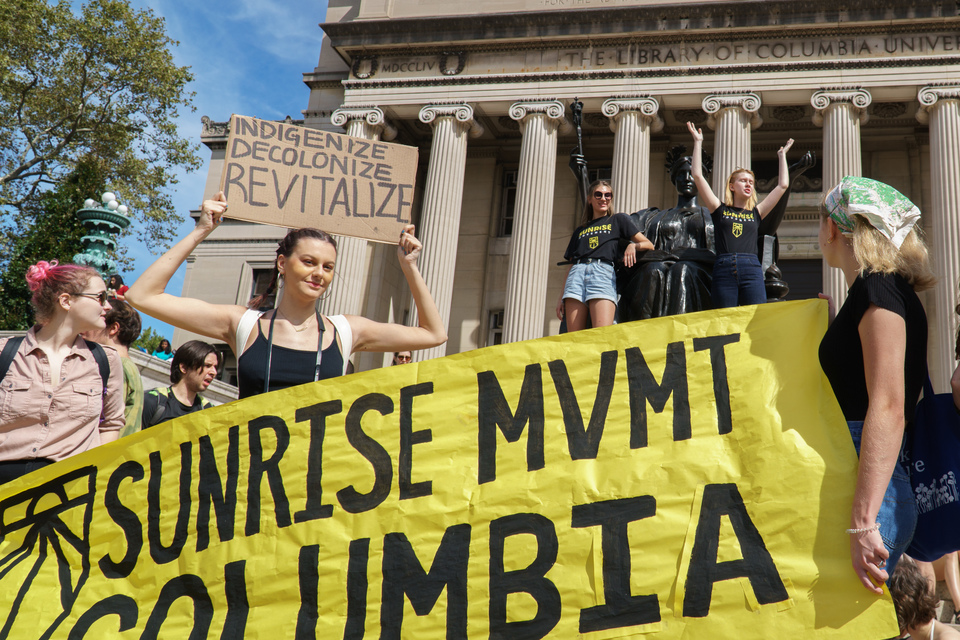 Columbia University President Lee Bollinger recently announced the establishment of a Climate Change Task Force through a schoolwide email, in which he asked the Columbia community, “Are we doing enough?”

His question is well-founded. As a result of human burning of fossil fuels, we are in the midst of a climate emergency. Sea levels are rising, natural disasters are increasing in quantity and severity, and record-breaking droughts are ravaging agricultural systems around the world—and Columbia is complicit. The University not only produces its own greenhouse gas emissions through utilities, academic travel, landfill waste, and the like, but Columbia also supports greenhouse gas emissions off campus by investing in fossil fuel industries and welcoming companies that support them to campus for recruitment. In March 2017, Columbia announced that it would divest from companies deriving more than 35 percent of their revenues from thermal coal production. It has not announced an intention to divest from oil, gas, or non-thermal coal, and has rejected past proposals for thorough fossil fuel divestment.

Climate change already impacts daily life at Columbia. In 2018, an extreme heatwave during move-in caused the hospitalization of several Barnard students. Such extreme unseasonal heat is only one of the ways rapidly changing climate conditions increasingly affect students. And although that heat wave was a scary reality for Barnard students, it pales in comparison to the deadly heat waves people endure in lower latitudes each summer.

People are noticing these changes, and taking action where they can. On September 20, scores of Columbia students joined tens of thousands of people marching in Battery Park to defend their right to a livable future on a rapidly heating planet. But marching is not enough; institutions and governments must act swiftly in order to eliminate the carbon emissions that have thrown our earth system out of balance. Chile is currently preparing to host the 25th Conference of Parties (COP25), an annual gathering on climate change and international policy during which member states will analyze and promote the legacy of the UNFCCC, the Kyoto Protocol, and the Paris Agreement. These are three momentous commitments for responding to and preventing the worst effects of this climate crisis.

In advance of COP25, the United Nations, partnering with institutions and networks of higher education around the world, has created the SDG Accord, calling upon universities to sign on by December 1 and demonstrate their commitments to achieving the UN Sustainable Development Goals of Education (4) and Climate Change Action (13). The letter begins with a declaration of climate emergency, and charges signatories to commit to carbon neutrality by 2050, allocate resources to “action-oriented climate change research and skills creation,” and further sustainability- and climate-focused education and outreach.

Columbia and other institutions of higher education are in a unique position to bring about meaningful action on climate change. Dedicated to the education of future leaders, the production of knowledge, the defense of truth, and debates of ethics and justice, universities are equipped with enormous moral authority. The SDG Accord calls on universities to use that authority to show that the climate crisis is an urgent priority, an existential threat that demands all the attention and talent we can muster.

The Columbia administration has already taken some steps toward improving campus sustainability. In 2017, for example, Columbia divested from thermal coal products in response to student demands. But even so, the University has yet to respond to the Columbia College Student Council ballot initiative approved last February that read, “Columbia should commit to 100% renewable energy and carbon neutrality by 2050,” a commitment barely consistent with what the collective body of climate science states as the minimum acceptable pace for full decarbonization.

If President Bollinger signs the SDG Accord, he will make Columbia University a world leader, as the first Ivy League institution to step up and call the climate crisis what it is: an emergency. He will be acting in accordance with the University’s mission to “support research and teaching on global issues,” to “advance knowledge and learning at the highest level,” and to “convey the products of its efforts to the world.” He will also join hundreds of other higher education institutions in this declaration, including the entire University of California system, the University of Cambridge, King’s College London, the University of Exeter, SUNY, Bard College, and Swarthmore College.

As students of Columbia University, and future citizens of the world, we have an answer to President Bollinger’s question, “Are we doing enough?”, and our answer is a resounding “no.” This University can and must do better.

It is time Columbia listened to its own scientists at Lamont-Doherty Earth Observatory—-including the late Dr. Wallace Broecker, a giant in the field of climate science—and made a commitment to ensuring a fair and livable future for its students. We, therefore, ask that President Bollinger sign the SDG Accord and start making a real commitment to our future.

The authors are members of the Columbia University hub of the Sunrise Movement. They can be found most Thursday evenings on the third floor of Hamilton, working tirelessly to fight the climate crisis. Students can urge Bollinger to sign the SDG Accord by sending him an email, linked here. As of the writing of this op-ed, 159 emails have already been sent encouraging Bollinger to sign.