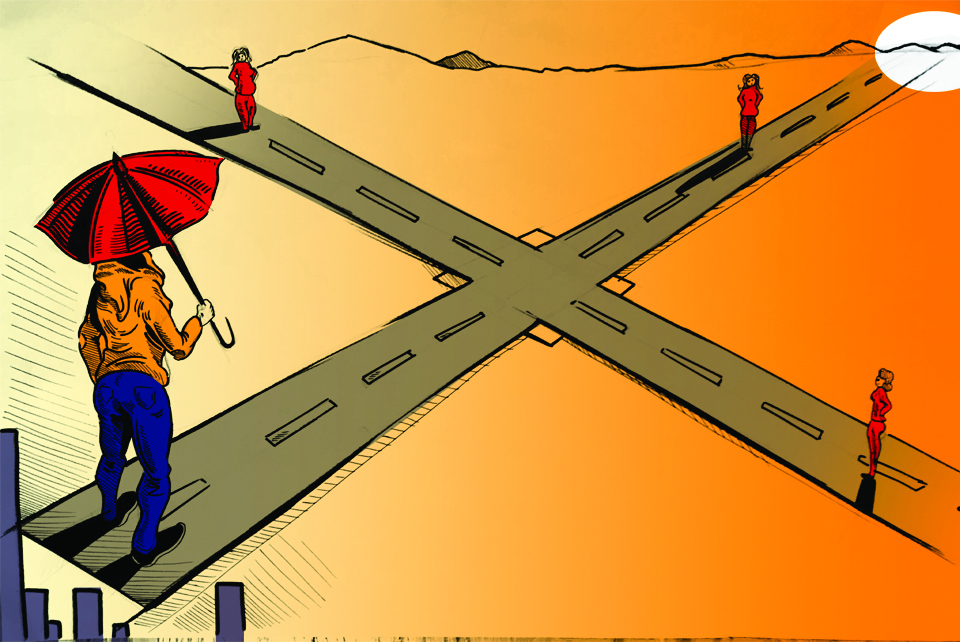 I organize my playlists according to distinct time periods in my life. For that reason, some playlists stick around for months, while others last only weeks. These playlists contain the cliches: First heartbreak at a middle school dance (thankfully, in my pre-Spotify days and no longer accessible), 715B (named after my Carman Hall dorm room, of course), Brandy (what I wished I was drinking when I created the playlist in my cubicle at 10 p.m. on a temperate summer night) and last but not least, حبيتك يخرب بيتك––a phrase carrying the sentiment of anger towards unreciprocated love––consisting strictly of Arabic ballads that aren’t suitable for any creature with ears.

The pitfall of having a time-specific playlist is its ability to transport you back into a moment you desperately wished to leave behind. For the lack of a better analogy, it acts as a time machine––not only does it remind you of a moment, but allows you to recover the feelings accompanying it.

While walking to class the other day––coffee in one hand, pain au chocolat in the other, wishing I had an umbrella but acknowledging that I’m too short to carry one without inevitably poking someone’s eye out––I took it upon myself to further my disillusionment and play my “end of summer” playlist. As I was in the pits of my hallucination, there came a song––Lahza, translating to “moment”––that infiltrated my peace of mind and abruptly reminded me that I was not, in fact, at home in Amman’s sunshine. The lyrics that caused this irreversible damage translate, poorly, to “I know you didn’t mean to hurt me.”

Rather anticlimactic, I know. You’re roughly 300 words into an article that just quoted what sounds like a Hannah Montana lyric as a pinnacle of realization. If you still haven’t closed this tab, allow me to explain.

In listening to this song, I was not thinking of the individuals who have hurt me––who, by the way, have just over one month to apologize before this decade ends––but rather, the individuals that I have unintentionally hurt along the way.

People often cite the biggest challenge of moving away from home as adjusting to the city, or in the case of coming to Columbia, the overwhelming workload. Personally, I’ve found that my biggest challenge is navigating changing relationships with loved ones and friends. I struggled with coming to terms with the fact that a relationship will inevitably change, but more so with the inevitable guilt attached to that.

It’s important to clarify that I acknowledge that friendships require effort, and that effort will not always be distributed equally on both ends––individuals aren’t designed to function like 19th-century brass scales. I realize that there will be instances when one individual must compromise more than another. I realize that the lack of communication can feel like developing a herniated disc from heavy-lifting the weight of carrying conversations.

While trying to get situated at Columbia, I found it hard to find a balance between perpetually holding onto friendships in their original form and allowing them to evolve alongside me. The reluctance in responding to this dilemma is what ultimately strained some friendships, as some friends were content with preserving the old status quo while I longed for change.

This implicit, unspoken decision on both ends, amplified by a lack of communication, resulted in the emergence of a plethora of issues. More precisely, it led to differing expectations attached to the friendship.

I understand that this very well may stem from a place of love. After all, our natural tendency when losing grip of something is to hold on to it tighter. What may feel like a friend bombarding me with their presence could be an overcompensation for the shift from being a part of each other’s everyday lives to living two entirely different lives. Whether this takes the form of texts filled with continuous updates or excessive calls, the expectation to remain continuously present in each other’s lives differed on both ends.

The shift in effort on my end didn’t emerge from suddenly caring less about these individuals, but from the physical distance between us, propelled by my lack of desire to overcompensate for the physical distance. This is precisely where my guilt stems from. What was the fine line between putting these friendships first and putting myself first? Was I acting out of self-interest? Could I have done anything to prevent some friendships from spiraling out of my life?

On the other hand, was I holding onto a fraying string? Are some friendships less malleable to changing circumstances than others? I found that the hardest question to answer was whether I had unintentionally hurt the people I neglected on the way to concentrating on myself.

Now that I am three years into my time at Columbia, I still find that this recursive cycle has no easy and definitive answer. Time and time again, there comes a Lahza when an unexpected invoked thought of an estranged friend causes me to pause in my tracks, or perhaps even drop my pain au chocolat.

Perhaps in my desire to find myself, I unintentionally damaged friendships with those who were confident that they already knew me.

To that I say, such is life. In my search for growth parallel to these individuals, it became clear that our paths were perpendicular. Nonetheless, I am forever grateful for our intersection.

The author is adamant about the fact that there is a difference between a pain au chocolat and a chocolate croissant, although the difference has yet to be made clear to her (even Google doesn’t know). The only thing she is more passionate about than croissants is Dana Hourani’s two released songs to date. To discuss them further, free to email her at lna2116@columbia.edu. Here’s the Shai runs alternate Tuesdays.