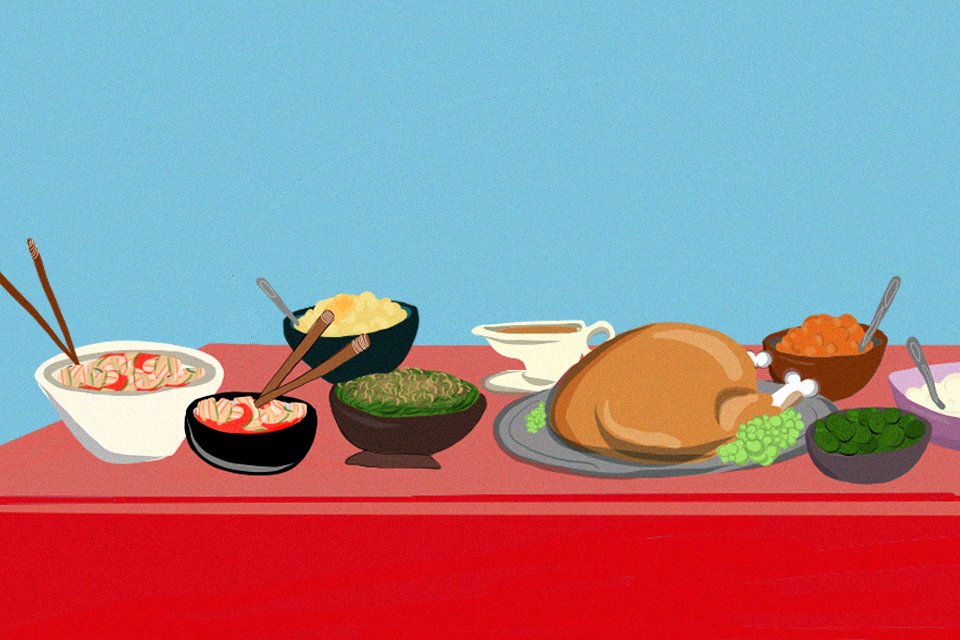 I spent this weekend in the last hurrah portion of my graduate school applications, and had to write a “commitment to diversity” statement. Because of this and the fact that I’m not going home or visiting my family for Thanksgiving this year, I’ve been trying to write about who I am in that sense.

From a scale from 1 to 10, how Korean am I? I should be able to say 5, shouldn’t I? Maybe I could argue for more, considering the only extended family I know is on my Korean side. But I would only put myself around a 3 on most days.

A lot of this is simply tied to how I perceive myself to appear physically. I don’t think I look particularly Korean. When I was younger, I always wished I had bigger eyes. I wanted silkier, lighter hair. I thought people looked at me and didn’t know why my face looked weird—almost white, but not quite there.

Two years ago, one of my best friends told me that I am basically white. I still remember it so vividly. In that moment, I felt instantly defensive. I wanted to shout at her and ask how she could ignore my family and this side of me. Instead, I laughed a little and didn’t say anything, because I figured that if I was perceived as white, then I must have been benefiting from passing.

I often feel I want to remind people of my Koreanness, and other times, I don’t know when or how to do so. I recognize I have the advantage of floating back and forth and not thinking about it, but sometimes I desperately want to be recognized for my background and find a familiar space. I feel so intimately connected to my four cousins, the Song cousins, because we share this background. Finding people with an understanding of your cultural background is intensely important to claiming a self-narrative. At Columbia, I have found difficulty placing myself into the clear cut groups that (consciously or not) the student body tends to slip into, regardless of the diversity we try to uphold.

While I have never been in a position where my ethnicity has been limiting or a problem for me, it has made me wonder how white I am, how I am perceived, and how I feel, especially on campus. Columbia is a predominantly white institution. The second-largest racial group in the undergraduate schools at Columbia is reported as the overgeneralized, conglomerate “Asian” at just under 17 percent. I am definitely not a minority, but I am not part of either group—I am “other,” and exist outside both white and Asian groups. Personally, I would feel really weird and out of place if I joined a Korean culture society on campus or an Asian-oriented club.

But there is an otherness that white people will never feel. I felt it when I saw a woman in Fort Lee crouched on the side of the road looking for dandelion leaves, wondering if anybody would notice, getting embarrassed for her when they did, and remembering my grandmother doing a similar thing when we went for a walk in the forest looking for dandelion leaves to make 나물 when I was much younger.

There exists too, an ingrained family history of desire—specifically, the desire to fit in. My grandparents want so much for me and the rest of their grandchildren to rise above this immigrant Korean narrative and find success in this white-dominated world. I want so much to make them proud and feel like they made it, stifling any feelings of otherness in order to claim victory.

The kids’ table was in the kitchen while the grown-up table—the long, official-looking rectangular wooden table—was in the front room. That’s where my mom and her siblings (six Koreans!) would sit with their (nearly all white!) spouses, with 할아버지 (grandfather) at the head of the table. At the kids’ table, Emily, Natalie, my older sister Kate, and I would sit and stuff ourselves—half-Korean cousins sharing Song family genes. Even with our different white last names, I still feel entirely comfortable with them because we share an implicit understanding of what it is like to inhabit an in-between space.

To be mixed is to check both boxes on those graduate school application forms, and then maybe hit “other” while you’re at it. Dealing with this otherness isn’t some massive hardship for me, but as I grow up and move through different spaces, especially in these predominantly white institutions that strive for diversity, I have questioned myself. Is there a correct way of inhabiting both spaces?

Sabina Maurer is a senior in Columbia College. She’s got one more column this fall (R.I.P.) and Happy Thanksgiving @ the Originals. Her column, The Art of Unset, runs alternate Fridays.