Roosting in ref: the night owls of Butler

Roosting in ref: the night owls of Butler 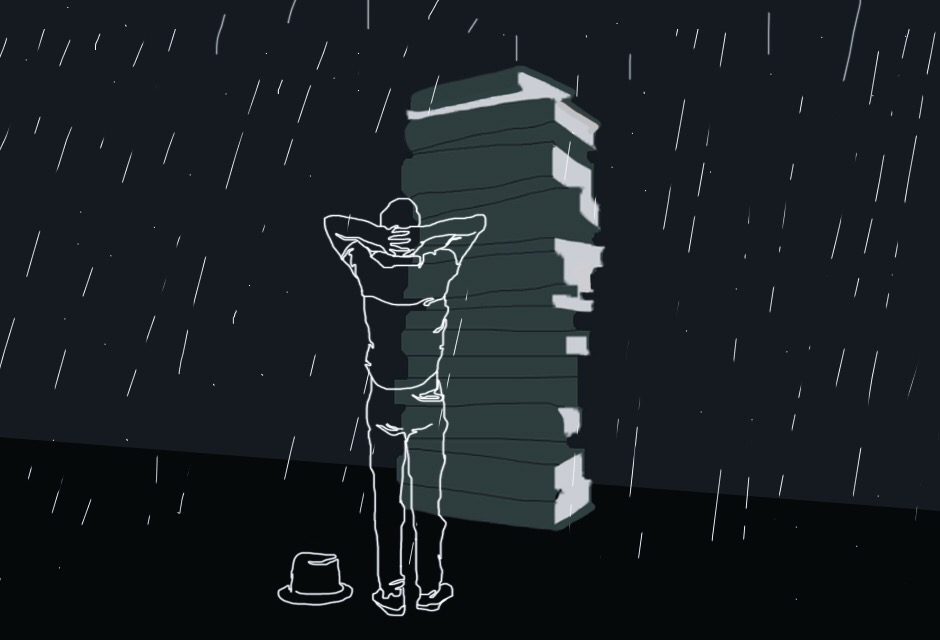 While there are some people who say there are never any open seats in Butler, there’s always space—you just have to wait long enough to find it. Stumble in after midnight and most of the crowds will be gone; you’ll begin to identify a pattern of people and phenomena that beholds itself to only its most devoted patrons.

The library is eerily empty at night; for all of the librarians’ noble efforts to maintain order, it is really after the circulation desk closes that things begin to die down in our oddly frenetic library. Although some of the people still sitting at their desks have unfortunately chanced upon a last-minute deadline, come back a couple of times and you’ll begin to notice that there are those who call Butler home exclusively at night, when there’s finally enough space to take the whole table and let your elbows out a little.

I think we tend to associate this kind of devotion to Butler with a degree of unhappiness. Brimming with life is hardly what most of us would call the result of a long night in Butler. Yet, there is something incredibly human about the shared vulnerability of the tacit danger that one has to be in to sacrifice life and liberty in one of the 24-hour reading rooms. While I don’t think it’s wrong to wish that people didn't feel the need to overwork themselves, we too often chastise the victims of stress culture instead of empathizing with the institutional pressure that they are under.

We tend to explain stress culture and the general phenomenon of overwork in what seems like fairly convenient terms. Maybe someone a while ago realized that they could use their all-nighter as a point of pride, and we tend to just generally condemn that pride as bad for our collective well-being. Yet, this explanation offers no truly helpful answers. We can try to lower the credit limit, reduce the number of majors you’re allowed to have, and bring puppies to the library. But what is another explanation for the source of that pride? Is condemning it without truly understanding its potential origins truly the best way of accomplishing our goals in a healthier way?

I obviously can’t provide all the answers, but I do want to talk about fear. While Butler often strikes the tourist’s eye as elegant, graceful and awe-inspiring, it can be a terrifying place to the veteran Columbia student. The rooms can either dwarf or constrict your very being. The perceived dehumanizing feeling motivates you to finish working and escape as quickly as possible. There is little room for socializing, although there are many admirable attempts to do so. Butler creates fear on its own, yet it also hosts a different, more existential anxiety: the summation of obligation, expectation, and doubt—what can be interpreted as the burden of being a Columbia student. For some students who have no other socioeconomic choice but to make sure that college is not only enjoyable but materially productive, sometimes frantically doing work, even if it’s not completely necessary, can be one of the means of establishing control over an increasingly difficult, chaotic world.

Therefore, if we want to truly address this issue, we must re-examine the value proposition that has fueled our university’s desirability over the last several decades—namely, the impression that a Columbia education holds the key to socioeconomic mobility. Of course it can, but as someone who has still found the many closed doors hard to unlock at times, I can personally attest to the fact that Columbia, like all elite universities, is hardly a guarantee of a better future. Rather, it should be a guarantee that you will be placed among the most extraordinary of people, something I would have had more time to enjoy if I had the privilege of more time. And in the meantime, until the world around us turns upside down on its poles for the better, maybe spare a thought and a cookie for your friend stuck in Butler.

If you see the author of this piece in Butler, a light croissant would be preferred to a cookie. Please reach out to philip.jang@columbia.edu for any questions or tips for putting off problem sets.