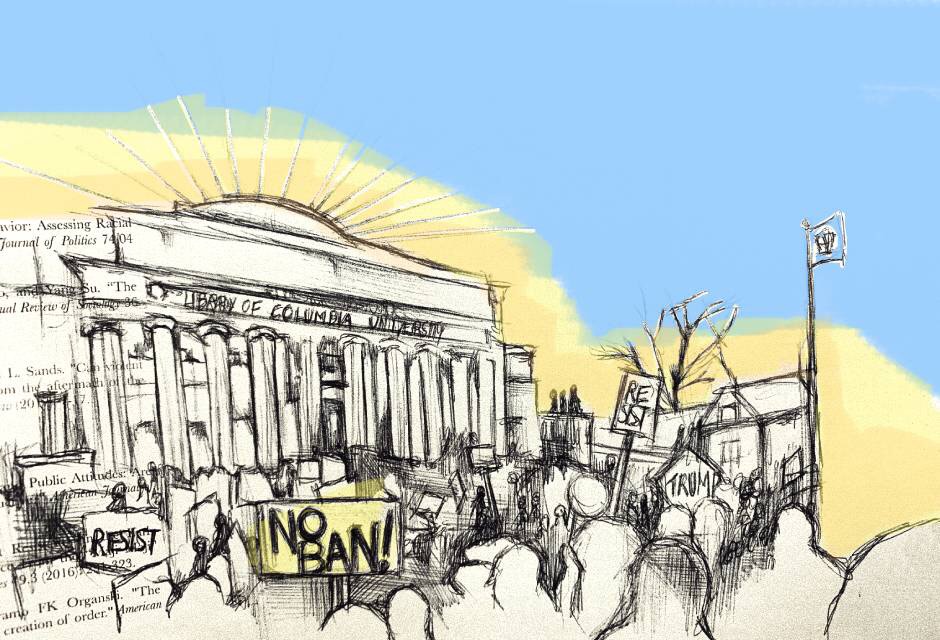 “No hate, no fear, refugees are welcome here.”

This chant would be repeated over and over again on Low Steps in a protest on January 30, 2017. After only two weeks in office, President Donald Trump had issued his “Muslim ban,” putting several Muslim-majority countries on a travel-ban list. Students gathered together in rage, apprehension, and uncertainty. Board members from the Columbia Muslim Students Association circulated a petition to hire a permanent Muslim advisor. Activists and professors gave speeches and provided instructions for marching to Washington Square Park or JFK Airport. During these events, there was unity in organizing against a common enemy.

However, despite the solidarity, I felt isolated.

My isolation did not come from a lack of concerned individuals, but from a lack of consolidated communal space for identity-specific healing. For me, the energy of one protest would soon devolve into individual grief rather than being shared and addressed through structural, communal support. As a first-year, far away from my support systems at home, I was not only grappling with the fear of Islamophobia but also integrating into campus during a tumultuous time. I did not know who I could turn to or where I fit.

Counseling services did not seem fitting since they do not offer the spiritual dimension I was looking for. And though many of my professors sympathized, they did not fully recognize the depth of how this affected me; I would still be expected to take an exam the following week. In the end, it felt like 20-something-year-old Muslim students were left to console each other and were unequipped to do so.

The needs of a faith group are more complex than a small prayer room in the basement of a building. Islam, like many other faith groups, is an organized, communal system. The burden of organizing consistent, weekly events (such as Friday prayer services that host around 150 attendees) would often fall on students. Expecting this work from students whose first priority is academics results in high amounts of pressure and stress. That burden was only furthered by the little communal space we had, which made it effectively impossible to have a centralized area to gather and foster a strong sense of unity and support for each other.

While these issues were present before the travel ban, rampant Islamophobia created an environment that needed active solidarity more than ever. The efforts of the past Muslim student body finally yielded a response from the administration: A permanent Muslim life coordinator, Amina Darwish, was hired by the end of that year. Amina’s role is to bridge the gap between the administration and the student body.

I did not realize that she was what our community needed until I saw the changes she enacted for Muslim students. Instead of relying on my friends for support that could result in an undue burden, I could turn to a scholar and leader with the expertise to address the problems Muslim students were facing. I signed up for her pastoral counseling and spent hours talking to her about my spiritual qualms. I believe that her centralized presence fosters stronger connections between students, inspiring them to come to her space, ultimately building a consistent community base.

In the span of only one and a half years, it feels like she’s helped to transform Muslim life on campus. The quality of our weekly Friday prayer services improved as she always chooses engaging, relevant, and scholarly speakers. She also plans weekly spiritual gatherings, a multitude of events, and interfaith discussions, all with growing numbers of attendees. She advocated for a larger prayer space.

Last year was the first time in many years that the holy month of Ramadan, during which adherents fast from sunrise to sunset, fell during the academic semester. She helped us organize daily free “iftars” (the dinner you eat to break your fast) for over 100 fasting students. Without her advocacy, Ramadan during the school year would have been an isolating, difficult experience.

Institutional support is crucial. It is the difference between being seen and not. It removes the burden from students and allows faculty and administration to share the responsibility. For so long, the University rejected efforts to hire an advisor because of funding constraints, but the single gesture of hiring one individual has transformed many Muslim students’ experiences for the better. To me, this sends a message from Columbia to Muslim students that we are welcome here.

I would like to thank students and our advisor for all the work that has been done thus far. This has set a great precedent for necessary structural change in our campus community.

This piece is about how institutional support changed my experience on this campus as a Muslim student. In 2017, following the travel ban, Columbia’s administration hired a permanent Muslim life coordinator. Her presence resulted in tangible changes on this campus. Shot of Espresso runs alternate Tuesdays.