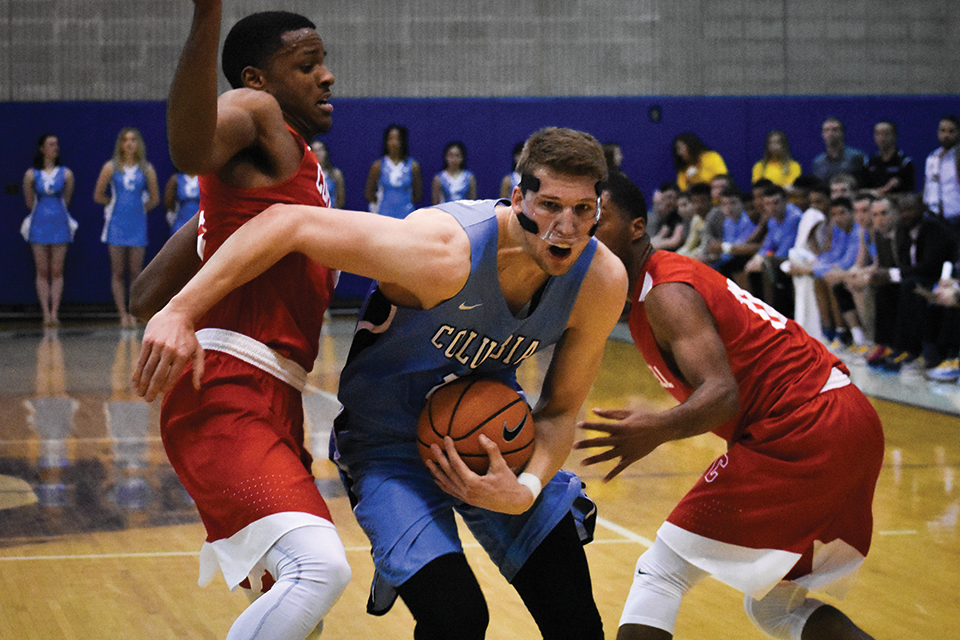 Junior forward Lukas Meisner tallied 19 points against the Big Red last weekend, shooting 4-for-5 from long range, and will hope to replicate that performance in this weekend's rematch.

Men’s basketball will travel to Ithaca on Saturday with hopes to complete a home-and-home sweep of upstate rival Cornell.

In the teams’ most recent meeting just last Saturday, Columbia finally broke out, firing on all cylinders on both ends of the court and eventually running Cornell off the floor in a resounding 88-62 victory.

While the Lions’ defense was effective, limiting the Big Red to just 43.8 percent shooting from the field and 30.4 percent from beyond the arc, what created such wide separation in the game was Columbia’s offensive outburst.

The team’s leading scorer of the season, sophomore point guard Mike Smith, who contributed nine points and five assists in 25 minutes of play, was Columbia’s sixth-highest scorer against Cornell.

“It was nice to see us have a good effort on both sides of the ball for a full game,” Engles said. “It was extremely positive for us. It was a game that we definitely needed to win.”

Most Ivy League games are played in a back-to-back format over the course of a weekend, just as Columbia opened the season playing at Princeton on a Friday and again against Penn in the Palestra on Saturday.

The home-and-home series format with Cornell presents an interesting situation in which Engles and his team will have had about two straight weeks to prepare for the Big Red.

“It makes it almost like a football situation,” Engles said. “You’ve got to plan out how you handle the week for your guys. From a Cornell standpoint, we’ve gone over the film a few times to try to find some things we can get better at.”

In practice, most of the Light Blue’s defensive focus has been directed at Cornell’s two-headed offensive monster, consisting of guard Matt Morgan, who leads the Ivy League in scoring at 23.3 points per game, and forward Stone Gettings, who is Cornell’s second leading scorer at 15.0 points per game.

The height of Columbia’s men disrupted Gettings, listed at a tall 6’9”, throughout the entire contest last Saturday. He finished with just eight points and three rebounds. But Morgan, who boasts a dynamic and well-balanced offensive skill set, had an easier time finding opportunities, carding 20 points on only nine shots.

The key to Columbia’s success in Ithaca, where Cornell is 5-1 this season, will be sustaining its defensive intensity.

“I was really happy with the defensive effort that we gave on Saturday,” Engles said. “Defense travels. If you’re playing good defense, it’s going to go with you no matter where you are.”

Tipoff is slated for 4 p.m. on Saturday at Newman Arena in Ithaca.