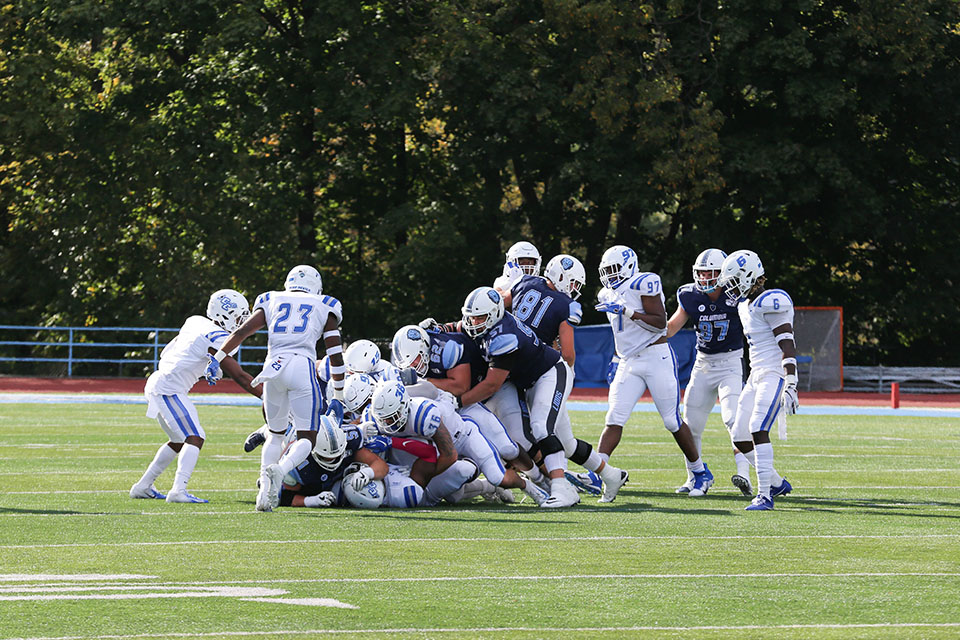 The Lions were not able to build momentum heading into six straight games of Ivy League play as they suffered their third straight loss against their last non-conference opponent.

In their last non-conference contest before facing off against Ivy League opponents for the final six weeks of the season, the Lions fell to Central Connecticut State University 24-14.

The Lions (1-3, 0-1 Ivy) went into their Week 4 matchup against the Blue Devils (5-1), who they beat 41-24 last season, hoping to rebound from two straight losses. However, Columbia’s inability to generate much on offense, along with a few defensive miscues, led to its third consecutive defeat.

While three straight losses will hurt the morale of any team, senior receiver and captain Josh Wainwright is trying to keep his message to the team as positive as possible.

“The only thing you can do is look forward, keep moving,” Wainwright said. “This loss happened so now we’ve got to watch the tape, we’ve got to rally around each other, and we’ve got to remember that this season is far from over. We still have a shot of attaining everything we want to.”

If the Lions are going to accomplish their goals this season, they are going to have to do so without their two key players on defense. Both junior linebacker Justin Woodley, who was a preseason Third Team All-Ivy League selection, and sophomore linebacker Cam Dillon, who is out for the year with a hairline fracture in his leg, had to be replaced during the game. While sophomore linebacker John Harris finished with a career-high 15 tackles, he and his fellow linebacker, senior Jalen Williams, showed their inexperience early on.

The first play where Dillon and Woodley’s absences were felt came on the Blue Devils’ second offensive drive. After two plays put CCSU in a 3rd-and-1 from its own 29-yard line, quarterback Aaron Winchester ran a play fake to running back Keonte Lucas, who kept running and got wide open for a 71-yard touchdown pass. There was not a defender within sight of Lucas, which head coach Al Bagnoli said was a result of the new linebackers, who “lost the back in coverage and ended up in huge plays in the first half.”

The touchdown was only one part of Columbia’s poor defensive performance in the first half, which saw the Blue Devils gain 378 yards while the Columbia offense was only able to generate 101. While Bagnoli pointed to the inexperience at linebacker as the source of many of the defensive problems in this game, senior defensive lineman Daniel DeLorenzi made sure not to place the blame on any one unit.

“I think we played well at times and I think at other times, we really kind of gave up things that we shouldn’t have,” DeLorenzi said. “A couple of those deep balls to the back and a couple of those receivers which we should really shut down. That falls on the whole defense. The D-line, the backers, and the guys in the back end.”

While the team may have been down following its third straight loss, DeLorenzi still took a moment to celebrate a personal milestone. In the third quarter, he strip-sacked Winchester for his 20th career sack, breaking the program record previously held by Lou Miller, CC ’09. While DeLorenzi was happy to break the record, he wished it could have been accompanied by a win.

“It’s a little bittersweet in this moment. I would trade those two sacks for a dub today. But it feels really good. It’s a cool feeling. It’s definitely a cool feeling to be a part of school history forever,” he said.

While DeLorenzi’s record-setting performance left the defense with something to be happy about after the game, the same cannot be said for the offense. Just as the defense was missing pieces, the Lions offense was forced to play without its leading receiver, senior Ronald Smith Jr. Smith’s absence clearly took a toll on the Lions’ quarterbacks, as junior Josh Bean and sophomore Ty Lenhart combined to go 13-for-28 for 168 yards, while CCSU threw for 299 yards.

Although Wainwright broke out for his best performance of the season with seven receptions for 94 yards and a touchdown, Smith’s absence allowed the Blue Devils to hone in on other parts of the offense.

“[Smith is] one of the best players we’ve got on our team, so any time he has the ball in his hands or any time he’s on the field, the defense has to keep an eye out for [him],” Wainwright said. “So having a player like Ron out for the week, there’s going to be a lot more attention in other places. … It takes a little chunk out of our offense.”

Despite the Lions’ struggles on offense, the team played well enough to find itself in a position to tie the game with a field goal in the fourth quarter. However, first-year kicker Alex Felkins—who has already cemented himself as the only kicker in school history to nail two field goals of more than 50-yards in his career—missed the 43-yard attempt, giving the ball back to the Blue Devils. CCSU then went on to score a touchdown on a 62-yard run by Winchester, putting the game out of reach for the Lions.

To Bagnoli, the missed field goal was representative of where the Lions currently stand and how they need to improve if they want to salvage their season.

“We’re just going to have to continue to keep working and stay the course and at some point hopefully things will stabilize and we’ll be able to come away and start winning a couple of these close games. But right now, we’re just making too many mistakes in all three facets,” Bagnoli said. “So it’s not just offense, it’s not just defense, it’s also the kicking game in terms of missed opportunities.”

The Lions will look to get back on track in next week’s homecoming matchup against the Penn Quakers at Wien Stadium at 1:30 p.m.