The first big moment for women's basketball (12-17, Ivy 1-13) came before the season had even officially begun.

Only three weeks into the school year, Stephanie Glance announced she would not be returning for her third year at the program's helm. Glance led the Lions to a 14-42 mark over those two seasons, but departed to become the executive director of the Kay Yow Cancer Fund after having served on its board of directors since 2007.

Sheila Roux, part of Glance's staff for two seasons, was named as the interim head coach, and set out to improve upon an 8-20 record from a year ago. She welcomed six first-years into the fold, including forward Josie Little and guard Emily Surloff, and retained the services of sophomore forward Camille Zimmermann and junior forward Tori Oliver, the latter a second team All-Ivy selection in 2014-15. 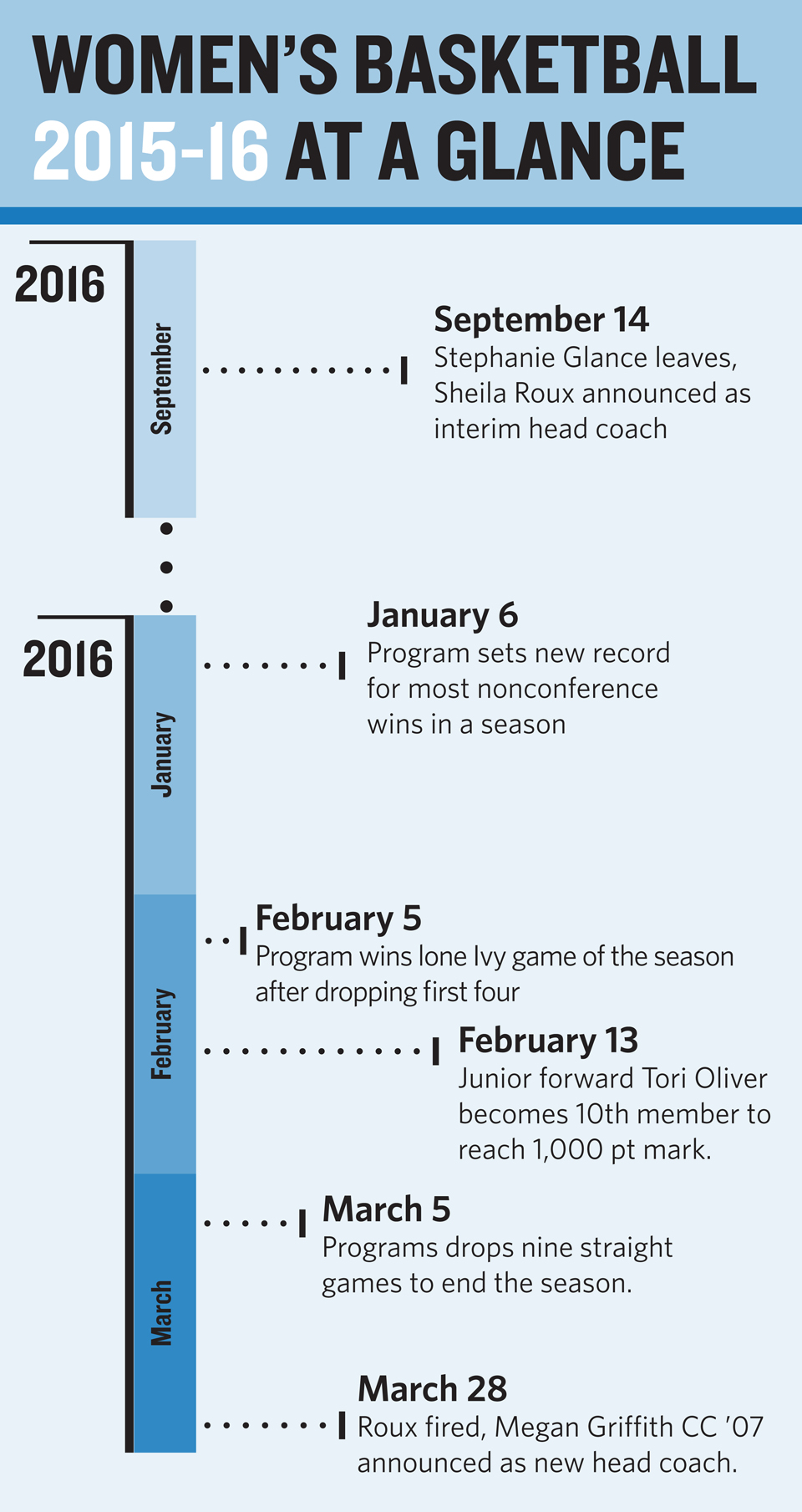 The Lions did not disappoint in their opening contests, beating UMBC on the road in overtime 70-68. Zimmermann played the role of hero in that matchup, cementing the win with a pair of clutch free throws to put the score at 70-67 with only 12 seconds left.

Columbia then easily dispatched Vermont and UMass-Lowell by at least 10 points before suffering its first loss of the season to Stony Brook 79-71.

The Light Blue responded strongly to beat Loyola (Maryland) and St. Francis (Pennsylvania), but slumped to a 21-point loss to then-No. 17/19 Arizona State in the ASU Classic in early December.

But after the ASU Classic, the Light Blue went 6-1 in its last seven games of nonconference play—a stretch that included a 102-18 victory over Division II Central Penn—to set a new program record with 11 victories outside of the Ivy League.

That momentum seemed promising entering the 14-game tournament, but it proved to be short-lived.

In the opening game against Cornell, a fourth-quarter collapse ended an otherwise solid three quarters of basketball for the Lions and cost them the matchup 66-59. In the away game the following weekend, a poor second quarter again cost the Lions in what could have been a much closer game 84-73.

Losses to Dartmouth and Harvard followed before it looked like the Light Blue had finally turned the corner against Yale.

Coming off a massive 25-point third quarter, the Lions entered the fourth period trailing 56-55, but their offense proved to be too much for the Bulldogs to handle en route to a 77-71 Columbia victory.
Five bench players combined for 24 points in the Yale victory—12 of which came from junior forward Devon Roeper alone—and Zimmerman scored a game-high 22 points on 12-for-13 shooting from the free throw line.

With a solid victory under the belt and still enough time in the season to right the first four losses, the Lions looked well-positioned to climb the Ivy standings—but improvements never materialized.

The Lions dropped all nine of their remaining contests by double-digit margins, and Roux left at season's end, replaced by Megan Griffith, CC '07.

Griffith spent the last six seasons at Princeton, where she was a major component of a program that has not only remained an Ivy powerhouse but also a mainstay in the NCAA Championship Tournament.

Only two members of the team will graduate in May, with its three leading scorers, Zimmerman, Oliver, and Roeper all returning next year.

Zimmerman averaged a team-high 14.4 points per game, and was awarded second team All-Ivy honors, while Oliver became the 10th Lion to reach the 1,000-point mark in program history, an honor she shares with Griffith.

"We are all really excited about the new coaching staff," said Oliver. "They are really enthusiastic, and they are very excited about building this new system."

The announcement of her return to the program has not just excited alumnae and fans, but also, and perhaps most importantly, the players themselves after what was a long season.

"We have already improved so much in just the two years I've been here," Zimmerman said. "So just being able to already see in the offseason how much we are improving, if all of carries over into next year, will be good especially with a fresh coaching staff. I think all of that is just going to help propel us to where we want to go-to an Ivy title.