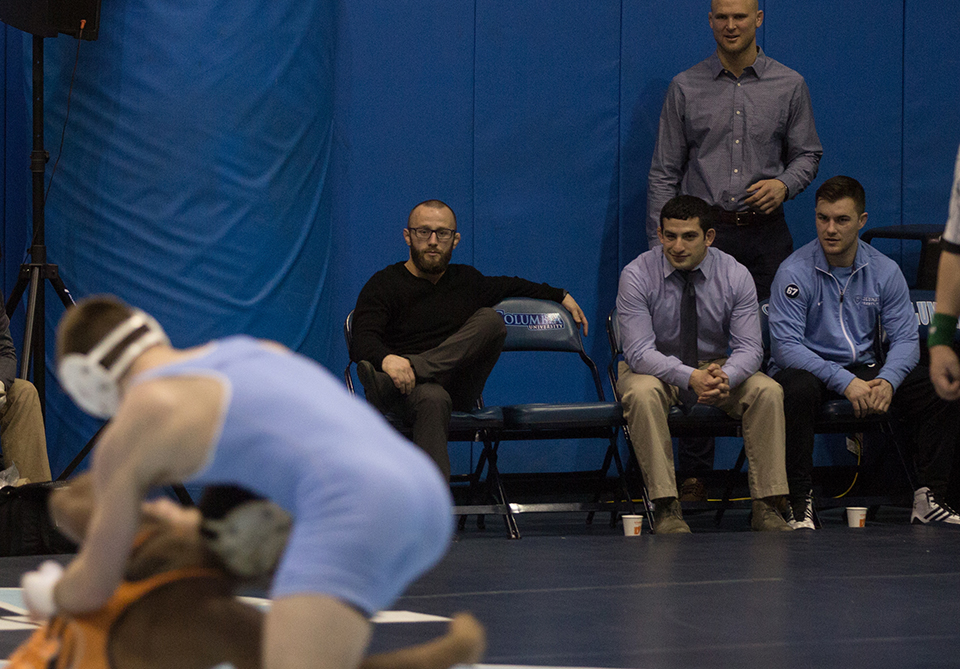 First-year wrestling head coach Zach Tanelli has been a constant throughout the GroupMe scandal and the challenging start to the season that followed.

When Zach Tanelli accepted his new position as Columbia wrestling head coach last July, the last thing he expected was to inherit a scandal that received national coverage.

But just four months later, as the wrestling team was preparing for its first meet of the season, screenshots of a racist and sexually explicit group chat between certain wrestlers leaked, leading to an investigation by the University and the athletic department.

“What happened with the incident surrounding that GroupMe text is obviously a challenging start to anyone’s tenure,” Tanelli said. “You don’t get to choose how you get to start your career.”

Not much could have prepared the young coach for what did happen. The publication of the controversial GroupMe messages put the season in jeopardy. As soon as the news became public, the team’s season was suspended indefinitely, creating uncertainty for the future of the program.

“Coming in as a freshman and really anticipating my first college season and knowing a week in it could be over, I might not even get a match in my freshman year—that was pretty hard to take,” first-year Alec Kelly said.

In spite of the uncertainty his team faced and his own inexperience, Tanelli used the opportunity to educate his team and eventually helped it overcome a lackluster start.

Having lost all seven of its first dual matches, the team has since bounced back to win three of its last seven, dropping its most recent to Penn by just one point, 21-20.

The comeback was made even more difficult by the suspension of eight wrestlers—seven seniors and a junior—in the wake of the GroupMe scandal. And the ones who stayed on the team weren’t all that familiar with Tanelli to begin with.

Having had no hand in the construction of the roster, since former coach Carl Fronhofer recruited the class of 2020, Tanelli faced the challenge of gelling with an entirely unfamiliar group of wrestlers. But he quickly put any concerns to rest.

“It was a little hard for me because I feel like I had a good relationship as a recruit with coach Fronhofer, and it was kind of sudden when he just stepped down,” Kelly said. “But I think I transitioned pretty well to the college season, and coach Tanelli made that transition easier for me.”

For standout junior Garrett Ryan, one of the top wrestlers in the program before Tanelli arrived, the transition took some time, but he commended the dedication Tanelli put into building relationships with everyone on the team.

“Coach Tanelli really showed us right off the bat that he was committed to us and wanted the best for us, number one above anything else,” said Ryan, who has in turn taken it upon himself to help Tanelli and the younger wrestlers with the adjustment.

Assistant coaches Joe Nord and Steve Santos, CC ’13, who have been coaching the Light Blue since 2015 and 2014, respectively, were major assets to Tanelli’s transition into head coaching.

Santos, Columbia’s highest finisher in the program’s history with third place in the 2013 NCAA championships, has provided a unique perspective to the transition after spending four years as a member of the program and two more as an assistant.

“I think [my] being at Columbia and being a former wrestler here has definitely helped [Tanelli] get a little bit of an insight into what it’s like wrestling at Columbia University and helping the guys in that transition,” Santos said.

Tanelli also commended Santos for the insight he has provided throughout the team’s adjustment period.

“Steve brings a lot of different experience to this program,” Tanelli said. “For my whole adaptation to this environment, he’s been a huge help.”

But Tanelli was no stranger to the nuances of college wrestling—in fact, he has notable experience both as a wrestler and as an assistant for some noteworthy wrestling programs. 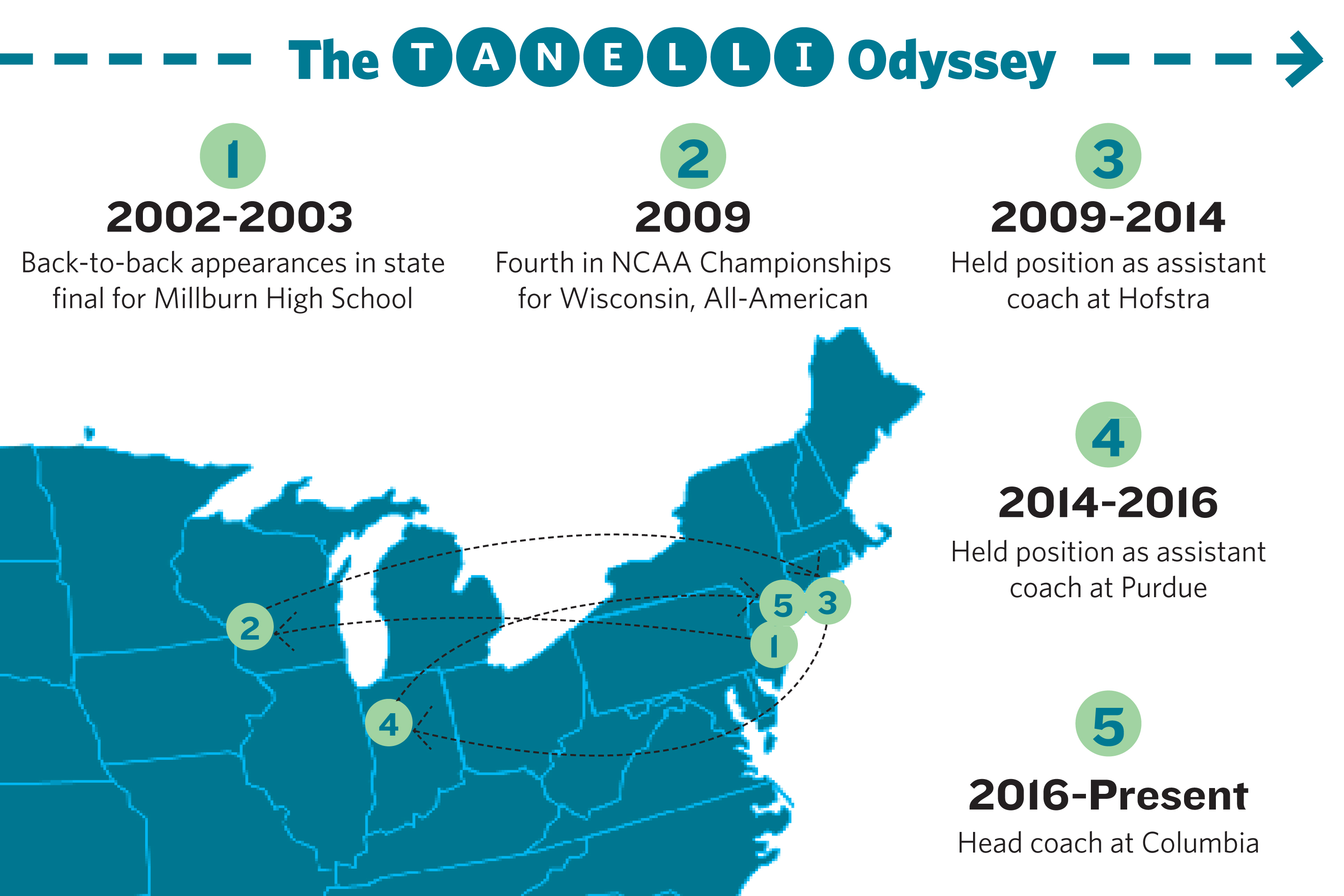 As a wrestler at the University of Wisconsin, Tanelli was a three-time NCAA qualifier, earning fourth place in the 141-pound division and All-American honors in his senior year. And though he reached tremendous highs throughout his career, Tanelli always wanted to be a wrestling coach.

“This is why I bypassed an international career when I graduated from college,” Tanelli said. “This is what I was looking for, this is why I made this a profession: It’s a dream of mine to coach.”

He made quick strides towards this goal soon after graduating from Wisconsin in 2009, spending time as an assistant at Hofstra and Purdue.

“I think it helped me just being back in the Big 10 coaching,” Tanelli said. “I think the more experience you can have in different programs, in different administrations, working under different regimes—I think it’s important.”

After seven years as an assistant in two significant programs, Tanelli found what he had been looking for––his chance to run his own program. On July 21, 2016, after former coach Carl Fronhofer stepped down after five years as head coach of Columbia wrestling and after nine years overall with the program, Tanelli was hired as head coach.

But just a few months into his first season, it fell to Tanelli to help the members of the team get their minds off the uncertainty of the investigation and prepare them for regular competition.

“I couldn’t imagine being on his end of that, two months into your new job, that goes down,” Ryan said. “But he really helped us realize during those weeks how important the sport is to us.”

It was a learning experience for the entire program.

When the investigation ended, the majority of the team’s senior wrestlers were suspended for the season. When the rest of the team returned to the mat, success was initially in short supply, but the Lions have seen consistently strong performances from Ryan and Kelly, among others, and wins have started to accumulate.

While there is plenty of credit to go around, Tanelli made his mark by emphasizing a focus on the sport itself regardless of what was happening off the mat.

“He helped us realize how lucky we are to have this opportunity and appreciate what we get to do on a day to day basis,” Ryan said. “He really helped us stay motivated and stay focused after all that happened.”