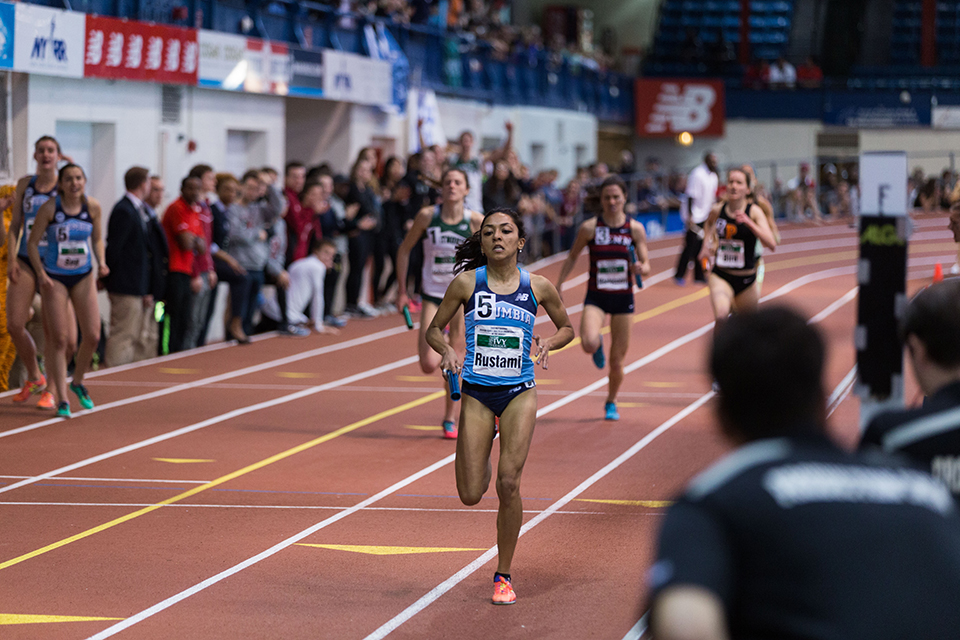 Senior Henna Rustami is one of track and field's top runners, but her path along the way has been anything but smooth.

When track and field’s senior Henna Rustami took to the track for the first time in high school, she fell after the gun went off and finished in last place.

“When she was a freshman with us she was pretty awful, to be totally honest,” Rustami’s high school coach Mike Spiteri said. “She was one of our slowest kids.”

Fast forward to this year, however, and Rustami is completely unrecognizable from her early years on the track.

At this weekend’s Ivy League Indoor Championships, Rustami won her first Ivy League title when she ran away with first place in the 3k, taking the tape in 9:34.66. The next day, she anchored the distance medley relay squad to another first-place finish. Coming into her leg, the Lions were in sixth place, but she gave the team the boost it needed to win the title with her 4:38.16 mile time.

But that sterling performance wasn’t even Rustami’s best of the season. On Feb. 4 at the Villanova Invitational, she posted a time in the 3k—9:10.56—that put her on par with the best Division I athletes in the nation and blew away her previous personal best of 9:34.35.

“Going into the race where I did run that 9:10, I was incredibly calm and incredibly relaxed and confident in my abilities,” Rustami said. “I stopped thinking about fitness and this elusive idea of fitness and what it should translate to in time, and kind of just trusted my body and what I could do.”

As stark as that improvement might seem, it did not come as a surprise to the coaching staff or to Rustami herself. They see her accomplishments as a testament to years of hard work and her dedication to the goals she sets for herself.

When Rustami first arrived in Morningside Heights, she struggled to post the times she knew she was capable of, ranking at the bottom of the team for her first two years.

“I knew I was better than how I was doing. And I knew it was going to take a little bit of time, but I just stayed patient,” Rustami said. “And if anything, the tough times and all the struggling helped motivate me to just keep working harder and show the coaches and my teammates that I was actually better than how I was running.”

Over the past two years, Rustami has done just that. She’s become one of the best runners in the nation. Her strong showing at this year’s Ivy championships was by no means an isolated occurrence—last outdoor season, Rustami took second in the 5k at the Ivy League Championships and qualified for NCAA Regionals, and this past cross country season she qualified for NCAAs.

Head coach Dan Ireland attributes her improvement over the past two years in part to a meeting the pair had during a particularly hard workout at Van Cortlandt Park in October of 2015.

“We kind of had a little bit of a meeting in practice one day, and I was just frustrated with her. I [said], ‘Look, you gotta take care of yourself. You’re not staying healthy, and you [have to] figure it out,’” Ireland remembered. “Since then, she hasn’t had a single issue. She's gotten her body straightened out, she's stayed healthy, she hasn't missed any weeks of training. Everything's just been skyrocketing since.”

Rustami remembers the meeting well for its impact on her determination.

“[The meeting] definitely helped just get me to stay on my routine and also just not be soft anymore,” Rustami said. “I guess that's what he’ll attribute that moment to, me not being soft anymore and kind of growing up after that.”

Rustami now leads a Columbia squad of 3k runners that ranks seventh nationally, despite being largely composed of the same athletes that made up Columbia’s Ivy-League-worst distance team at the Heptagonal Cross Country Championships. The other athletes who comprise the squad are senior Natalie Tanner, junior Nell Crosby, and sophomore Emily Acker.

“That whole group I think has kind of taken Henna’s lead and has really worked hard, and we’ve been on them really hard since we were bad in cross [country],” Ireland said. “[We] said, ‘We [have to] get this thing turned around––we’re better than we ran.’”

Tanner, too, once ranked at the bottom of the women’s squad. But she attributes part of her and Rustami’s rise to the latter’s drive to meet her goals.

“We never really felt like we could score our freshman year,” Tanner said. “But I think the juniors and sophomores have taken our example of ‘You can achieve these big goals if you work for it and are dedicated and believe you can do it.’ I think Henna has really led the way in that.”

Rustami is still striving to improve, but now her eyes are on even bigger goals––namely, Columbia’s outdoor record in the 5k. The record is currently 15:37, and Rustami’s personal best is 16:18. Ireland isn’t ready to rule out her chances, given the Syosset, New York-native’s history of vast improvements—especially her recent 20-second decrease in the 3k.

For her old high school coach, Rustami’s growth from one of the worst athletes on her high school team to a Division I athlete to a nationally-ranked runner has been a singular experience.

“Sometimes I get jealous that I don't get to coach her anymore,” Spiteri said. “Because she was kind of that once in a lifetime athlete. The drive inside of her I can't explain. Nor do I think she can, because there are times I feel like she feels lost and is not sure what she wants to do. But somehow, [she] always digs down—for whatever reason it is—and just continues to improve.”