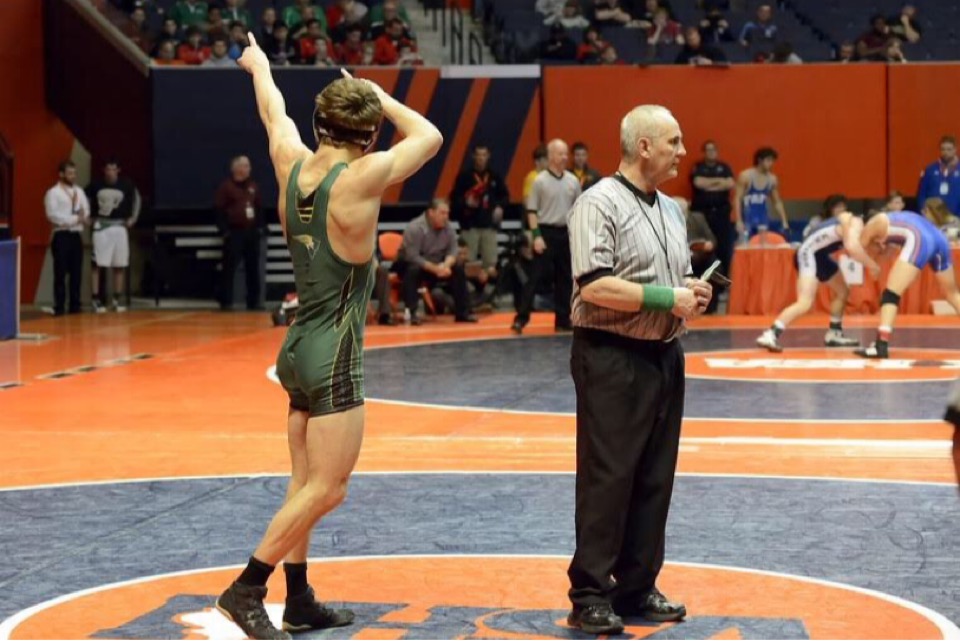 On Nov. 7, senior high school wrestler Dylan Geick committed to wrestle for Columbia, a team on the precipice of one of the most publicized scandals in Columbia Athletics history.

Three days later, the team’s seniors were found to have used racist, sexist, and homophobic language in a group chat. The news came at a particularly inopportune time for Geick, an openly gay athlete.

“I had just committed and everyone was like, ‘Hey, did you see this?’ Geick said. “I looked into it fully—I wasn’t going to just read the headlines—and saw that the vast majority of those messages were old, as well as the fact that I had met these guys.”

Though it would have been understandable if the Chicago native had reacted strongly by decommitting from the team, he remained totally committed to his dream school and the head coach that supported him through the process.

Columbia wrestling head coach Zach Tanelli called Geick about the GroupMe chat even before the news had gone public.

“He didn’t blow it off in any way,” Geick said. “He had his own ways of dealing with that even outside of what the administration had laid down for them. He called me before the news broke and said that this was not going to be a representation of the program.”

And looking back, Geick was most impressed with the fact that Tanelli responded so quickly without even knowing Geick was gay. He had come out to his friends and family nearly a year earlier, but it was only after a piece published by Outsports, a website devoted to covering the stories of gay athletes, last Thursday that Tanelli became aware of Geick’s sexual orientation—something that Geick himself thought Tanelli had known ever since his first visit.

Geick assumed that the conversation he had with Tanelli about diversity and openness was Tanelli’s way of letting him know that his sexuality was a non-issue on the team.

“That just speaks even more volumes about the program,” Geick said. “He had no agenda for saying this.”

That reassurance came as a great relief to Geick, as being an openly gay male on a Division I athletic team can often be a challenge—regardless of the sport he plays or whether his team is dealing with scandal. While there are 351 Division college basketball teams, the first openly gay player came out as recently as 2014. And the Division I Football Bowl Subdivision’s first-ever has yet to even set foot on campus, as he’s a recruit for the class of 2021.

For Hudson Taylor, former Columbia wrestling assistant coach and founder of Athlete Ally, a nonprofit developed to educate athletic communities to eliminate homophobia and transphobia, wrestling can be a particularly problematic sport.

“The more physical intimacy is built into the ruleset of a sport, the more you see homophobic and sexist behavior,” Taylor said. “You are pushed to assert that narrow definition of masculinity. Those athletes that are in non-contact sports often times are the ones who had the space to be themselves.”

Despite this proclivity, Geick recounts his coming out to his high school wrestling team as a relatively painless experience. His team accepted him for who he is, though there have been the expected whispers and “odd comments” at wrestling events outside of Stevenson High School.

Geick’s high school team’s reaction came in the wake of a perhaps unexpected coming-out moment for him. He had been going out with a male classmate for a couple weeks, and rumors had started circulating about their relationship.

The setting wasn’t so formal: it was a lunch table at Stevens.

“This girl was jokingly like, ‘Oh yeah, when are you coming out?’” Geick recalled. “I just said ‘Yeah, I actually am gay. Might as well come out right now.’ They all just kind of like stared at me.”

From there, the rest of his high school community, especially his parents, supported him wholeheartedly through the coming out process.

And when the Outsports article hit the web, that encouragement increased tenfold as his social media accounts flooded with follows and likes from all over the country. On his Instagram account alone, he gained 5,000 followers in just four days.

But numbers only mean so much to Geick. What matters most to him about the new-found attention is that it could equip LGBTQIA athletes with the confidence to be open about their sexuality.

“I totally hope that my story can do that,” Geick said. “It’s been really cool because I’ve already heard from some people that it’s already had that effect.”

Geick particularly appreciated correspondence from the current Columbia team—not just Tanelli, but the athletes themselves. He noted that first-year wrestler Alec Kelly messaged him a congratulations after the Outsports piece was published.

And while Geick notes that he was drawn to the culture of the team during his visit last fall, questions still remain as to whether or not a culture shift has taken place in the team after the GroupMe scandal. Taylor, who was hired to work with the team to directly address homophobia following the incident, believes that the education process is continuous but has faith the team can positively engage with members of the LGBTQIA community.

“We’re still going to have to make athletes aware of the difference between intent and the impact of their language,” Taylor said. “Our goal should be that there’s consistency of action regardless of who folks think is in the room, so I would hope that the team would create a welcoming and respectful place, no matter who is joining the team.”