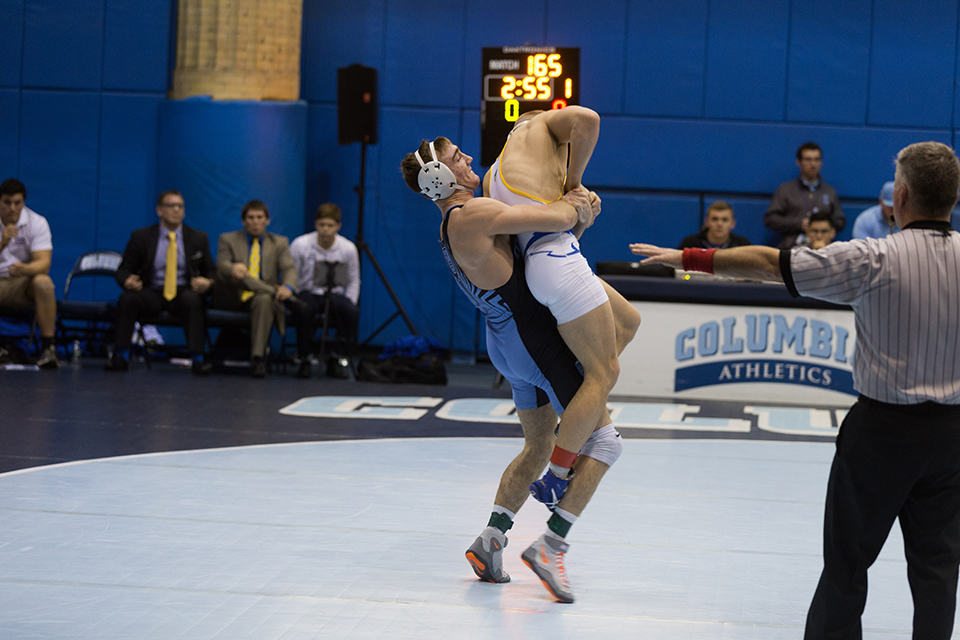 After gaining first and fourth in their respective weight classes, Ryan and White gained bids to the NCAA Championships.

Ryan and White gained automatic bids to the March 16 event after finishing first and fourth at the heavyweight and 165 pound divisions, respectively.

Ryan, who was the No. 3 seed in the heavyweight division, won all four matches he appeared in, including against the top two seeds in the semifinals and finals of the tournament. With the first-place finish, the junior became the Lions’ first EIWA champion since current assistant coach and former wrestler Steve Santos, CC ’13, won at 149 pounds in 2013.

White was also the No. 3 seed in his division and started the tournament with two wins before being stopped by fall in the semifinals. This put the Vermont native in the consolation semifinals, where he needed to win against Navy’s Drew Daniels, who he bested 2-0 to secure a NCAA bid.

White went on to lose in the third-place match, but his strong showing still guaranteed his third straight trip to the NCAAs. Ryan’s bid also makes this the third straight year in which he will appear at the NCAA Championships.

Fellow juniors Jacob Macalolooy and Danny Reed both finished eighth in their weight classes, 141 and 149 pounds, respectively. Macalolooy was given the eighth seed going into the tournament, so the finish was expected for him.

Reed, on the other hand, was not ranked out of the competitors in the 149-pound division. But he impressed in his first match, defeating the No. 4 seed in the division with a takedown in the last 30 seconds of the last round. He went on to lose 7-6 in a close quarterfinal match against his Harvard opponent after nearly gaining the victory with a last-minute burst. He won his first match in the consolation bracket but couldn’t keep the momentum going, and the New Jersey native lost his next two matches to place eighth.

Five other Lions earned at least one victory over the two-day tournament, and the team ended up in 12th place overall out of 16 teams.

Ryan and White continue their seasons at the NCAA Championships in St. Louis, Missouri the weekend of March 16 to18.