From the Lion's Mouth: What you don't know about pole vaulting

From the Lion's Mouth: What you don't know about pole vaulting 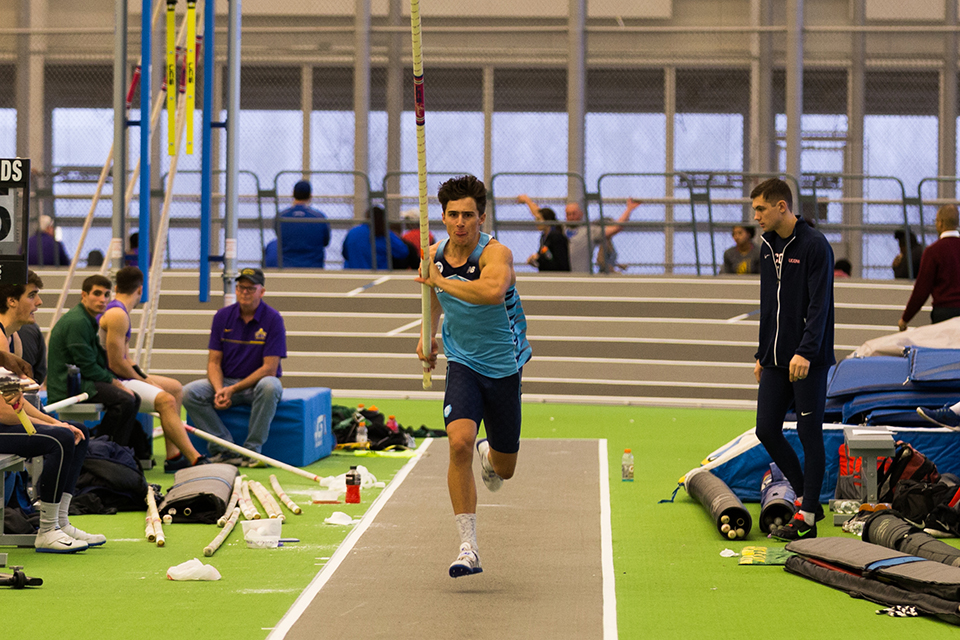 On track and field’s historically distance-heavy squad, junior Abigail Sharkey and sophomore Robert O’Brien are the team’s only pole vaulters. The two of them sat down with Spectator’s Ally McDonough to discuss their craft and how they got interested in it.

Sharkey: When I was a little girl in gymnastics, I always thought, “I’m gonna do this forever, I’m gonna go to the Olympics, this is my thing.” But gymnastics is not the type of sport that you can do very long, it’s just so hard on your body. So when I switched to pole vault, it was like, “Ok, no, this is the thing that I’m gonna try to do for as long as I can.”

O’Brien, on the other hand, was introduced to the sport his freshman year of high school, and six years later, on Jan. 20, 2017, he broke Columbia’s indoor school record when he cleared 5.00 meters. And the new height that the Los Angeles, California, native set didn’t just happen by accident.

O’Brien: When you pole vault, you don’t just start wherever, run as fast as you can, and take off. You’re counting every single step you take, you know exactly how far away from your takeoff you should be, you know where you’re taking off, you know everything. So, you have to know your run, you have to have a consistent run. There's nothing random about it.

Sharkey: You need to be catching things like, “Where is my step landing? Am I in the right spot? Do I want to raise my hand up on the pole? Do I want to scoot back a little bit?” So there's a lot of kind of like the mental game going on, which makes it kind of, I think more interesting.

O’Brien: I know in my head that I'm going to take 16 steps total before I take off. So I start running, I'm counting in my head, building up quicker and quicker and so eight, seven, six, five, four, three, two, one...

Sharkey: And then as you’re running, you’re slowly dropping the pole down.

O’Brien: The tip of the pole goes into this box which goes down eight inches. Then you jump as high and powerfully as you can, you try to hold your takeoff position, you don’t just... The pole doesn’t just carry you up, you have to put energy into it.

Sharkey: While the pole is bent, you flip yourself upside down.

Sharkey: It goes by very fast, I think, when you’re watching. It’s really slow when you’re doing it sometimes.

But no matter how precise they aim to make a vault, no vaulter can walk away with a flawless performance.

Sharkey: I think that’s kind of really the thing about pole vault, you never really do a perfect jump. You’re always trying to get it better.

O’Brien: It gets so frustrating because you can get 95% of the vault perfect by your own standards, but you can mess up the last 5% and it’s not like you get 95% of the height, you don’t make it. The way the pole vault rules work, you start at one height, you get three attempts at that height, if you make it, you continue to the next height. If you don’t make it in those three attempts, you’re out.

Even with the benefits from individual tweaks between vaults, the improvements from consistent training don’t always manifest right away.

Sharkey: It’s definitely not easy, because like I said, it can be a very mentally challenging sport, especially once you start to get to the higher heights. Progression can be really slow, or like non-existent. Maybe you’re working on your run, or you’re working on something that is going to improve you overall, but you’re not going to see those improvements for a year or two.

From the Lion’s Mouth is a content series that provides Columbia’s coaches and student-athletes with a platform from which to share their experiences and connect with the Columbia community.