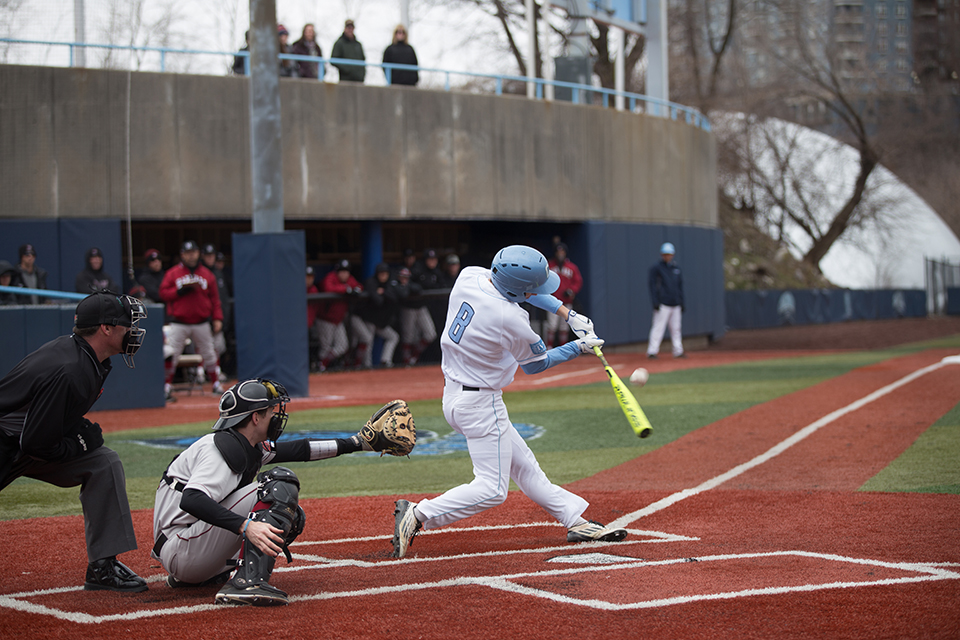 The Lions must post a series record of 3-1 or better to make the Ivy League Championship.

Baseball will take on Penn in a home-and-home series this weekend to determine the winner of the Ivy League’s Lou Gehrig Division.

Columbia (14-21, 9-7 Ivy) currently sits two games behind Penn (21-16, 11-5 Ivy) for the division lead. If the Lions sweep the Quakers, they will win the division outright, while a 3-1 result would give them the title on a tiebreaker. A 2-2 or worse performance will mark the end of the Lions’ season.

Both teams will enter the weekend on in-league hot streaks. Columbia’s offense exploded in a four-game sweep of Princeton, combining for 47 runs, including a season-high 21 in the series finale.

The Ivy League took notice, as sophomore Chandler Bengtson and first-year Liam McGill were named the Player of the Week and Rookie of the Week, respectively. Bengtson hit .450 against the Tigers with three home runs, 12 RBIs, and eight runs scored, capped by a seven-RBI effort in the final game. McGill tallied just one RBI but hit .389 with a .476 OBP. His .486 conference play mark in the latter category remains the highest in the Ivy League and leads all Division I first-years. Both awards were Columbia’s first in their respective category in the 2017 season.

Penn, meanwhile, is coming off a 3-1 performance against Cornell that featured a dominant showing by the Quaker pitching staff. Penn’s pitchers combined allowed just four runs, shutting out the Big Red in the first and third games of the series. Quaker Jake Cousins took home Pitcher of the Week honors for his performance in that first game, a complete-game shutout with 10 strikeouts. On the season, Cousins ranks second in the Ivy League with a 1.74 ERA, while Penn’s overall mark of 3.36 is lowest in the Ancient Eight—a potentially tough matchup for the Lions’ hot bats.

At the plate, Penn boasts a deep lineup, with six regulars batting above .290. Tim Graul leads the way with a .382 average, a .444 OBP, and 33 RBIs, while Matt McGeagh provides some pop with a .303 average and a team-leading five home runs.

Friday’s games are scheduled for 1 p.m. and 4 p.m. at Satow Stadium, while Saturday’s contests will take place at the same time in Philadelphia.