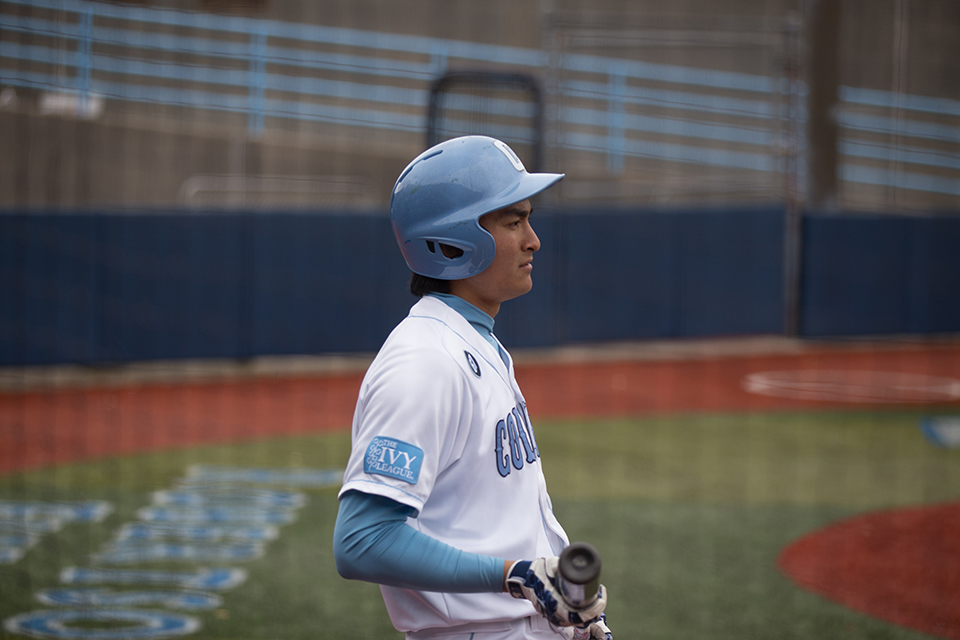 A current junior, infielder Randell Kanemaru is one of the few remaining contributors from the Lions' last title in 2015.

Now in his junior year, Kanemaru has the chance to lift the Lions back to the top of the league as they head into the last weekend of regular season play.

The team currently sits on the edge of making it to the championship: If they can take at least three of four games against Penn this weekend, the Lions will secure their spot in the series after a one year hiatus. Despite the team’s inconsistency throughout Ivy play this season, Kanemaru has routinely put forward crucial plate appearances to help carry the team offensively.

This year, the infielder’s consistency at the plate has brought in 33 RBIs, tied for the most in the Ivy League—and he’s impressed Columbia baseball commentator for the Ivy League Digital Network, Ryan Young.

“He kind of checks all the boxes offensively that you can ask for,” Young said. “And then when you factor in that he’s an infielder, he plays—at least this year—third and second base, it just makes everything all the more impressive.”

In addition to his impressive RBI count, Kanemaru currently leads the Lions and is second in the Ivy League in both batting average and slugging percentage, putting up .394 and .622, respectively. His 30 runs are also the third most in the league, while his 50 hits currently place him second.

In last weekend’s four game series against Princeton, the Lions swept the Tigers with a combined 47 runs, eight of which came from Kanemaru’s bat. During Sunday’s 21-5 romp of the Tigers in the second game of the day, Kanemaru batted in four runs, going three for four.

Despite his consistent improvement since coming to Columbia and his powerful swing, the infielder does not see himself as consciously filling out the role of a “power hitter” on the team.

“I'm not thinking about that when I'm hitting,” Kanemaru said. “I'm just trying to produce a quality at bat depending on the situation to help my team.”

Kanemaru has demonstrated an understanding of the sport and an ability to counteract pitchers who try to limit his offensive edge. Notably, Kanemaru has been able send more balls to the pull side—for a right hander, that means hitting to his less-natural right side of the field—a technique head coach Brett Boretti finds crucial to Kanemaru’s advancement as an offensive contributor. 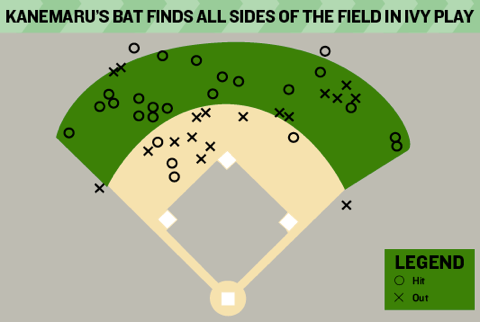 “He’s a guy that came in and used the opposite field primarily his freshman year, but I think as he’s gotten stronger and better, he’s been able to utilize the whole field,” Boretti said. “Guys [would] try to attack him inside in his freshman year ... and I think that now you pay the price when you wanna go in there and he’s ready for it.”

Kanemaru has also brought a much appreciated, relaxed attitude to the sport. In a game that requires a particular endurance of mental fortitude, his teammates have found that Kanemaru approaches the game appropriately.

Will Savage, a member of the 2015 Ivy Championship team and recent MLB draft to the Detroit Tigers system in the 16th round, reflected on the importance of Kanemaru’s approach.

“He takes it seriously,” Savage said. “At the same time, he always has a good time playing, which I think is something that is easy to forget to do when you’re playing at the college level.”

Kanemaru believes one of the most useful tactics to approaching the mentally trying parts of the sport is simply talking through struggles with teammates.

Both Boretti and current member of the team, junior Mark Flynn, remarked on Kanemaru’s ability to let go when a call does not go as he thought it should.

“The way he looks at things and lets some bad at bats or a bad play roll off and move on to the next one, I think that’s healthy from a baseball perspective, from a mentally tough perspective,” Boretti said. “It takes a lot of guys a long time to learn how to do that.”

“He never lets an umpire’s call get in his head at all,” Flynn said. “If an umpire makes a bad call, each person has a certain way that we call flushing it, moving past it, and Randell’s is kind of making this funny face.”

Defensively, Kanemaru has been a useful utility infielder for the squad, often switching position during the season as the team needed. A third baseman during his high school career in Santa Ana, California, Kanemaru has since also played shortstop and second for Columbia. This season he has primarily returned to his original position of third base.

When he joined the team as a first-year, his natural position of third base was occupied by the three year starter David Vandercook, CC ’15. Kanemaru’s offensive skills earned him a place on the team, and he filled out the vacated shortstop position next to Savage at second.

Kanemaru regards these position changes as a natural part of the sport, but such transitions are not always smooth for other players. The ball is fielded differently at third than at second, where the fielder generally has more time to make each play.

“It’s not the easiest thing moving from third over to second, then back to third,” Boretti said. “You know just making sure that you get the repetition you need in order to get your comfort zone… to really see the ball off the bat as far as the angles and the hops.”

Going forward, it is likely that Kanemaru will take each of these skills he has acquired over his career at Columbia to the minor leagues, as he hopes to follow a path similar to that of recent grads like Dario Pizanno, CC ‘15, Jordan Serena, CC ‘15, and George Thanopoulos, CC ‘16. Kanemaru’s offensive capabilities and infield versatility are likely to help market him to the MLB, whether it be this year or after he is expected to graduate.

Still, Kanemaru said he is not thinking about his individual trajectory here and believes that his own success will come hand in hand with the team’s success.

“I'm sure it'd be nice to get picked up, but that's not really my focus right now,” Kanemaru said. “If you look back at my freshman year when we won Ivys and played well in the regional, that's where scouts see the best in players. And I feel like for that to happen, we need to perform well as a team.”

While Kanemaru’s path through Columbia has been distinct in its own right, Young noted that Kanemaru does bare a resemblance to Columbia Hall of Famer and owner of two World Series rings from his time with the Minnesota Twins, Gene Larkin, CC ‘84.

Larkin too was a third baseman for the Lions and had a powerful bat that eventually propelled him to the majors. Larkin’s majors career is marked by his hit in the bottom of the 10th inning of game seven of the 1991 World Series that earned the winning run for the Twins.

While that’s a high bar of comparison, the Light Blue’s current infield ace has this weekend’s series to prove his team’s worth and many years ahead to navigate professional baseball.