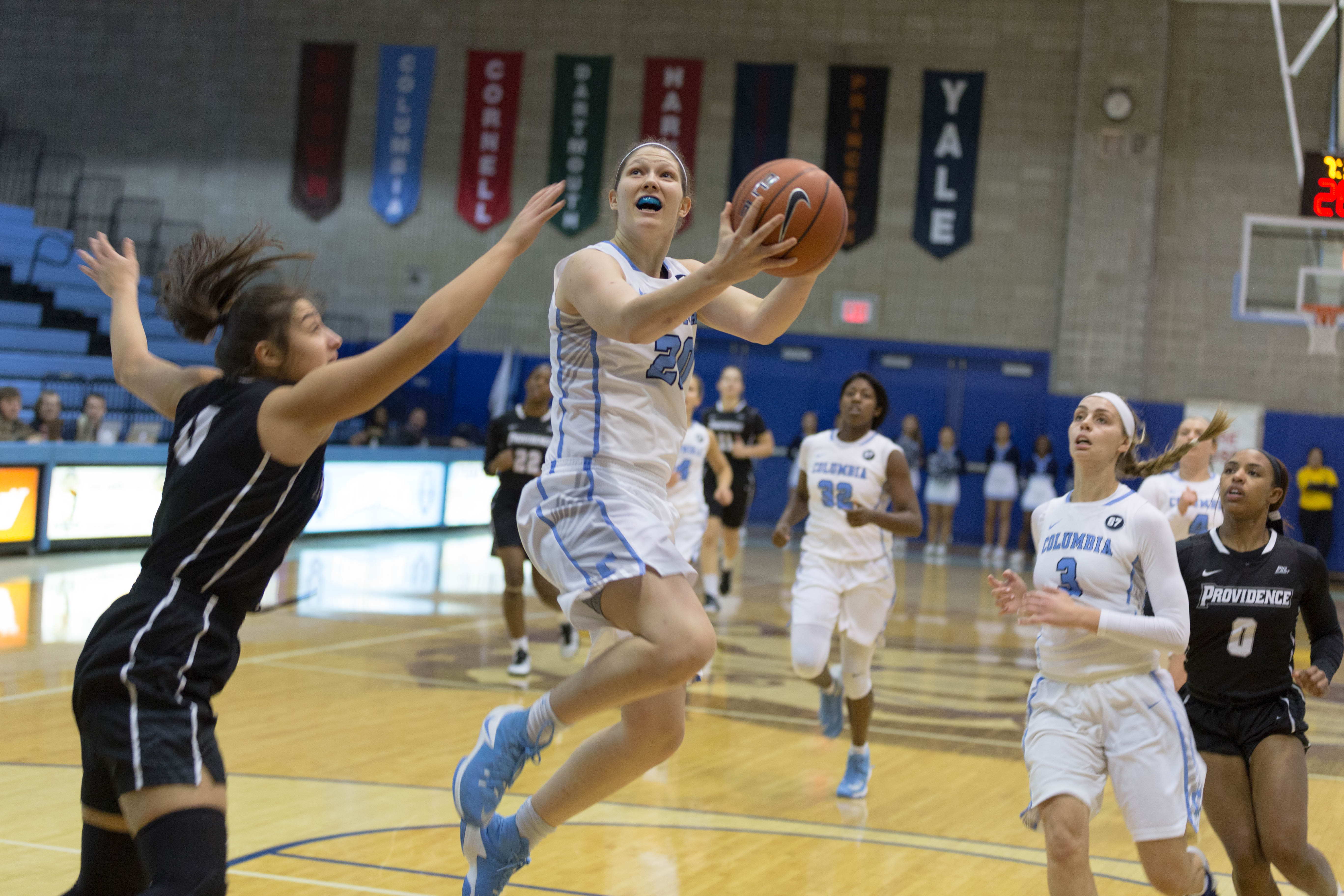 Women’s basketball showed growth in its first season under head coach Megan Griffith, CC ’07, but was ultimately unable to carry momentum from a hot nonconference start into Ivy League play.

Griffith took the reigns of a program that had not won more than three Ivy League games since the 2010-2011 season and struggled to a 1-13 mark in Ancient Eight play a year ago. The former star guard for the Light Blue made her presence felt early, installing an up-tempo offensive attack—one that led the team to its best overall record since 2010 and tied for best conference record since 2011.

Early returns were promising, as Columbia got off to a 10-3 start in nonconference play—the team’s best in more than two decades. That start included a 66-64 overtime victory over Providence, which marked the Light Blue’s first win over a Big East opponent in program history. Senior forward Tori Oliver, junior forward Camille Zimmerman, and sophomore point guard Paulina Körner led the way for the Lions in the early going, each averaging well over 30 minutes a game and carrying the bulk of the scoring load.

Conference play presented an entirely different challenge for Columbia, however. Offensive balance eluded the Lions against less forgiving Ivy defenses, even as Zimmerman upped her production from nonconference play. The junior averaged 24.4 points and 9.6 rebounds per game against Ivy opponents, compared to her season averages of 22.5 points and 9.6 rebounds. Zimmerman led the Ancient Eight in each category en route to a first-team All-Ivy nod, but received less support from her teammates than in nonconference play, ultimately leading the Lions in scoring in every Ivy contest.

This lack of balance was reflected in the box scores, as Columbia consistently dug itself an early hole against Ivy opponents and was forced to come from behind in the second half of games. The Lions showed fight even in the face of steep deficits, and lost only two Ivy contests by more than 10 points, but their slow starts usually proved too much to overcome, leading to a 3-11 run in conference play.

After dropping its first two Ivy games to Cornell, Columbia appeared to be hitting its stride in late January. The Lions followed a historic quadruple-overtime 91-88 victory over Dartmouth with a hard-fought 70-68 loss to Harvard the next day in a weekend that had all the makings of sparking a hot streak. When the Light Blue topped Yale 72-68 the following Friday to move to 2-3 in conference play, it looked poised to make real noise in the conference—but that proved to be the Lions’ high point.

After its solid start, the Light Blue hit a slump to go 1-8 in its remaining Ivy games, with the lone victory a 69-48 home win over Dartmouth that secured a series sweep. Conference powerhouses Penn and Princeton dealt the Lions four defeats, and Yale avenged its earlier loss with a 55-47 victory at Levien Gymnasium to wrap up the season.

Despite that series of frustrating losses, however, the 3-11 Ivy mark was still the Lions’ best since 2013-2014. With Zimmerman and Körner returning and Griffith having had a full offseason to work with her players, Columbia has a solid foundation upon which to improve for the 2017-2018 season.