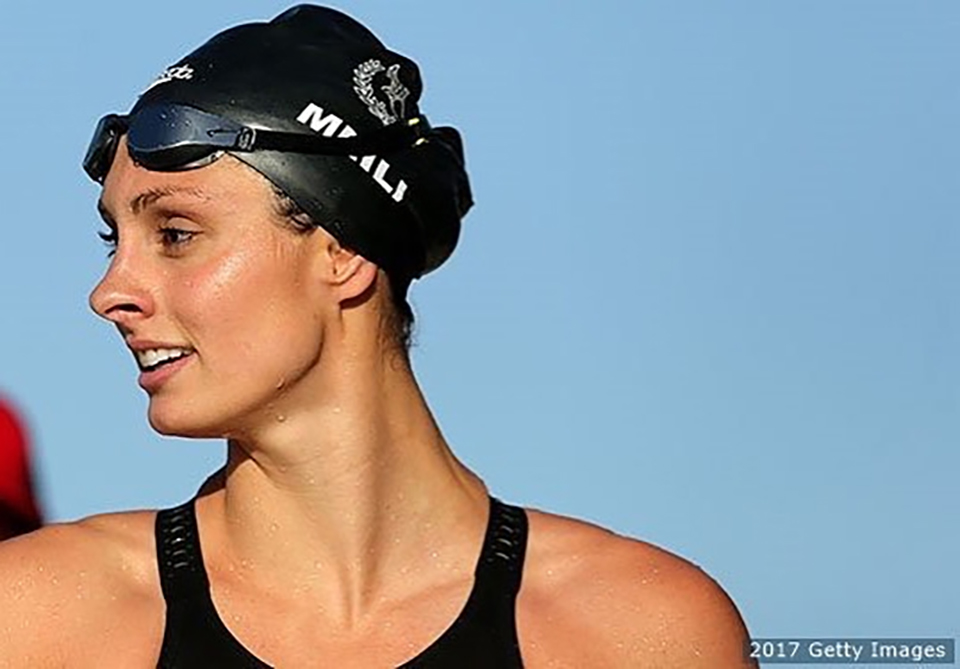 An Olympian and Columbia graduate, Katie Meili will meet her newest challenge at Georgetown Law.

At the end of the 2016 Olympics in Rio, former Ivy League champion Katie Meili, CC ’13, stood with an American flag flying behind her, the country’s anthem thundering through the stadium, and a bronze medal hanging around her neck after the 100 meter breaststroke final.

Now, just a year after Rio, Meili holds the third-fastest time in the world and a spot in the newest class at Georgetown Law.

As a competitor and a pupil, Meili will face a series of unique challenges over the next two years. Although she has learned a great deal about how to train at the highest level since graduating from Columbia, she will need to fuse the life of a professional athlete with that of a law student.

“I have no idea what it’s going to be like,” Meili acknowledged in reference to Georgetown. “Swimming is the one thing that’s a constant for me. It has been my whole life, and it’s something that’s comforting for me. If I’m ever stressed, or worried, or having a bad day, I know that I can find a pool and a swim will make me feel better.”

With an impressive swimming resume that includes Ivy League domination, the World Cup series, the Olympic games, and the FINA World Championships, Meili is not the only person looking forward to her arrival at Georgetown.

Georgetown’s swim program recently accepted Meili as their new volunteer assistant coach. Head coach Jack Leavitt looks forward to working with Meili, as he believes her international experience will serve as an unparalleled asset for his swimmers.

“She has been coached by some of the best coaches in the world,” Leavitt remarked. “She’s picked up some things along the way that she can definitely help teach our team about… I’m excited to work with her and see what kind of impact she can have on our team and what impact we can have on her. I think it’s going to be a mutually beneficial relationship.”

The decision to put a hold on her training did not come easily for Meili. Choosing between swimming and pursuing a course of higher education has plagued the Olympian since graduating from Columbia. Meili initially intended to become a paralegal in New York City after graduation. Instead, she moved to Charlotte, North Carolina in 2013, when renowned swim coach David Marsh invited her to join his program of elite swimmers.

As Meili continues to impress with her swimming career, one of her former coaches, Bob Groseth of SwimMAC Carolina, identified a key component of her swimming style that accounts for the majority of her academic and physical success.

“She has what I refer to as great motor-educability. That is, if you show her something, like a technique, and try to explain it, she can dial into it and figure out how to do it,” Groseth said.

From August through November of 2015, Meili had plenty of time to fine-tune that skill. Following her appearance at the 2015 U.S. Masters Summer National Championships, she traveled around Europe for the FINA World Cup. This series of swim meets gave Meili invaluable experience in international competitions and boosted her confidence as an individual swimmer. Groseth credits the World Cup for giving Meili the necessary racing experience to compete on a world stage.

This year Meili moved up from the World Cup to the FINA World Championships, the second most intense swimming competition behind the Olympics. The 2016 team roster included swimming legends Katie Ledecky, Nathan Adrian, Elizabeth Beisel, and Matt Grevers, among others.

The Columbia graduate had represented the United States in Budapest at the FINA World Championships this past summer. While in Hungary, Meili earned a silver medal and clocked in at 1:05.03 for the 100 meter breastroke, currently the third fastest time in the world.

Historically, the United States has dominated the FINA World Championships, winning over 400 medals since the meet’s inception in 1973. Meili added her name to that list of medalists on July 25 when she won her silver in the 100 meter breaststroke. She touched the wall behind fellow-American and reigning Olympic champion, Lilly King, who won the gold with a world record time of 1:04.13.

“It was one of those things where it was so loud you can feel it in your chest,” Meili remarked when asked about Budapest. “I looked down at my hands and they were shaking… I remember just taking that all in before I walked out and thinking, ‘This is so incredible that I get to do this, on this stage, in front of this many people.’ I don’t know how many more opportunities I’m going to have to ever do this, and I just really wanted to appreciate it.”

In the wake of her fastest season to date, Meili looks forward to meeting her new challenge head on. For the next two years, she will act as a volunteer assistant coach for Georgetown, attend law school, and continue to train for the 2020 Olympics.

“I know that I’m not ready to be done swimming. I’m still improving, and I’m still having fun,” Meili concluded. “I always, always, always tell myself that I will keep swimming until I’m not having fun, I’m not enjoying it, or I can’t support myself doing it. There’s not really a reason for me to stop.”