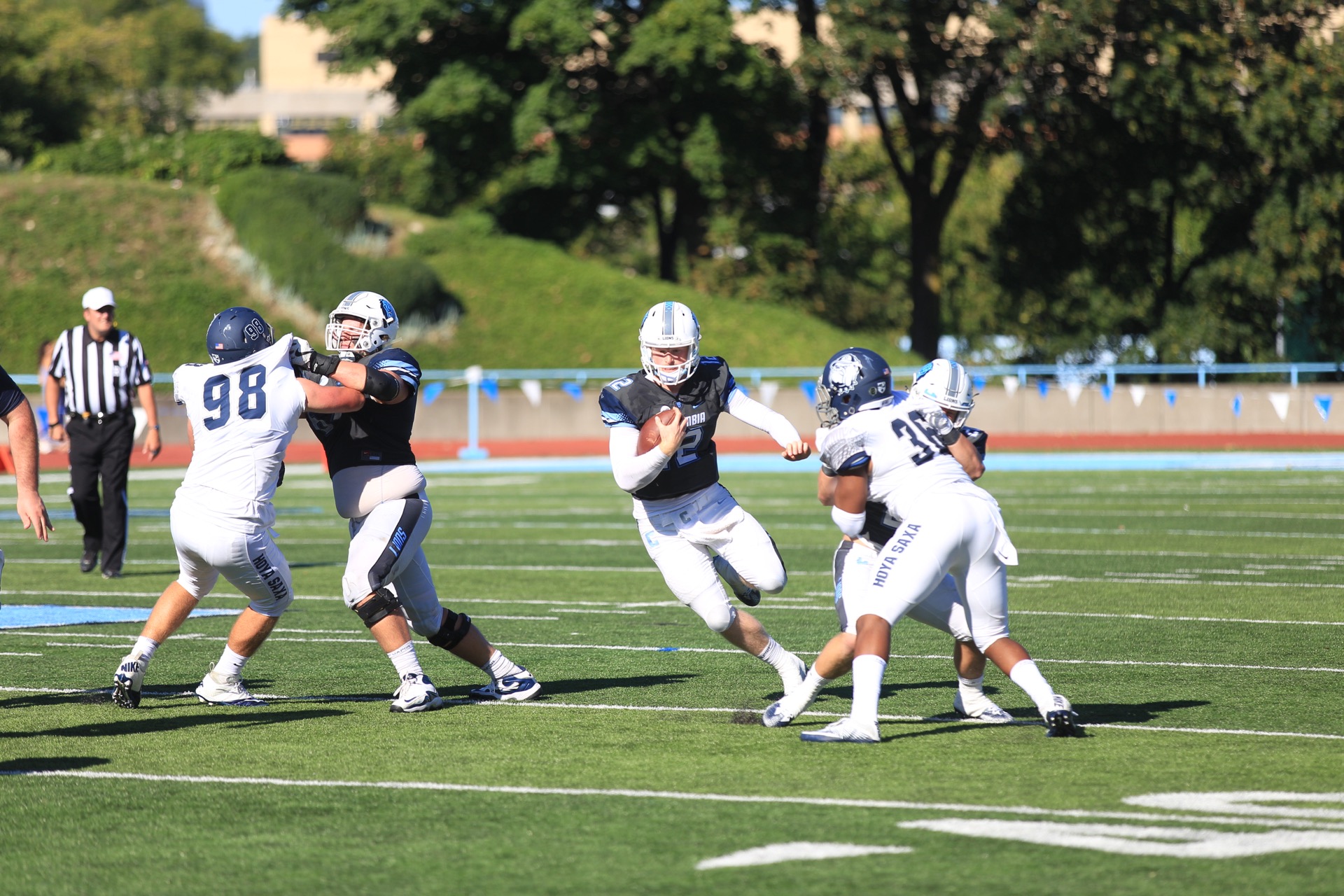 Senior quarterback Anders Hill passed for 158 yards and 4 touchdowns, sparking a tremendous effort from the Lions' offense, who tallied 347 total yards and 35 points in the dominating win.

Senior quarterback Anders Hill threw for 91 yards and three touchdowns in the second quarter, and football never looked back in a 35-14 win against Georgetown in the third annual Lou Little Cup.

The Lions (2-0) took a 21-0 lead over the Hoyas (1-2) into the locker room at the half thanks to their second-quarter explosion, in which they took advantage of solid field position on each of its three scoring drives.

With the win, Columbia starts the season 2-0 for the first time since 2006, when the Lions also topped Georgetown in the second game of the season. The two wins tie the combined win total of the 2013 to 2015 seasons, in which football won just two games over a three-year span.

The Lions came out flat in the first quarter, as the team racked up just 41 yards on offense while giving up 97 to the Hoyas. Georgetown put together two extended drives, but both ended with missed field goals, leaving the Hoyas scoreless at the end of the frame.

The second quarter marked a major turnaround, as the Lions totaled 131 yards of offense and allowed just four total yards to the Hoyas, capitalizing on the departure of Georgetown quarterback Tim Barnes, who exited due to injury late in the first quarter and was replaced by backup Clay Norris.

The scoring opened up with a 46-yard drive for the Light Blue that lasted just 2:33 and ended with an 18-yard touchdown reception by sophomore wide receiver Ronald Smith II. Smith II made the catch on a crossing route over the middle, absorbed an initial hit, and stretched for the end zone for the first score of the contest.

After Georgetown botched a long snap on fourth down deep in its own territory, senior defensive tackle Lord Hyeamang recovered the fumble at the Georgetown 25 to give the Light Blue excellent field position. The Lions took advantage with another quick drive, capped off by an 11-yard touchdown for sophomore wide receiver Josh Wainwright, his fifth consecutive game with a touchdown pass.

After a 32-yard punt from Georgetown’s Brad Hurst sailed out of bounds, the Lions started at Georgetown’s 42-yard line with just 1:28 remaining in the half. The Light Blue worked quickly, and with seven seconds left, Hill found Wainwright for another 11-yard touchdown. The sophomore finished with 74 yards on nine catches and two touchdowns to lead the Columbia receiving corps.

The ball ended up finding me today, but it could be any one of our receivers,” Wainwright said. “We’re threats all across the board”

The strong offensive effort was supported by a consistent Lions defense, which kept Georgetown to just over 100 yards of total offense and only nine rushing yards in the first half. Senior defensive back Landon Baty and junior defensive back Ryan Gilbert tied for the team lead with six tackles apiece.

Georgetown wide receivers didn’t help the team’s cause, dropping several passes at all levels of the field while Norris spent much of the game under pressure from the Lion front. Senior defensive tackle Dominic Perkovic and junior middle linebacker Cal Falkenhayn, who was playing in place of sophomore linebacker Jalen Williams after he left the game with an injury in the second quarter, each contributed timely sacks.

“We have a next man up mentality,” Falkenhayn said. “The mentality was just ‘do my job and do it well.’”

“It was good to see we’re starting to develop some depth,” head coach Al Bagnoli added. “We took a hit and Cal comes in, and we don’t miss a beat. You know the program is starting to round into shape when that happens.”

After a scoreless third quarter, the Lions began the fourth quarter with Smith’s second touchdown reception of the game and took a 28-0 lead. On the day, Smith finished with 66 yards on seven catches and two touchdowns.

On the ensuing drive, the Hoyas finally broke through thanks to a 56-yard reception by wide receiver Brandon Williams off a one-handed catch and capped the drive with a short touchdown pass to fullback Carl Thomas.

The Light Blue extended their lead to 35-7 after a two-yard run by first-year third-string quarterback Josh Bean, who was used in multiple short-yardage situations on the day. Georgetown responded with an 83-yard touchdown from wide receiver Michael Dereus, bringing the score to 35-14 and providing the final margin of the contest.

“Everybody says that between week one and week two is when you show your biggest improvement, and I thought we bore that out,” Bagnoli said. “... We‘re still capable of doing so much more.”

The Lions will be back in action next week in New Jersey against Princeton on Saturday, Sept. 30, for their first Ivy League matchup of the year.