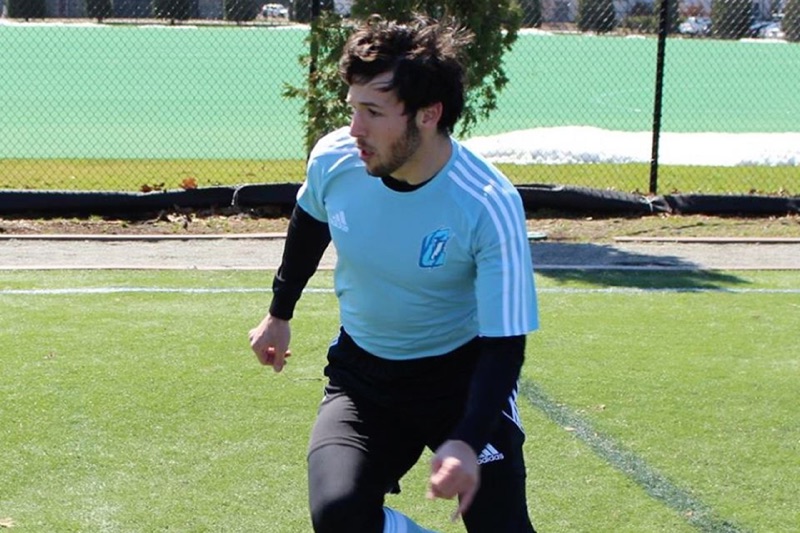 Jeremy Pachter played for CU Club Soccer in the 2016 Ivy League Club Soccer Tournament in a jersey without a Columbia logo.

When CU Club Soccer competes in the annual Ivy League Club Soccer Tournament in the spring, senior Ben Carlin and his team will not be able to wear Columbia jerseys.

As the only players at the tournament without an affiliated school, Carlin, the club president, and his teammates will have funded their own path to the competition. The team, which sends about 15 of 30 members to games, is not an official Columbia University club and therefore receives none of the title’s associated benefits.

Because it lacks official club status, CU Club Soccer foregoes a number of benefits: education-affiliated discounts on uniforms that could add up to hundreds of dollars across the team, gameday costs of about $20 per player or thousands per season across the team, and the ability to flyer or recruit at club fairs.

As a result, competitive soccer at Columbia, without a varsity spot, ultimately costs a student a few hundred dollars per season.

“Our first year, fees were like 250 dollars. We could cut that in half or even more so, if we just had the discounts and the recognition.” Carlin said. “And so that excluded a lot of people. There were a lot of people from disadvantaged backgrounds who were like, ‘I really want to play, I love soccer, but I can’t afford it.’”

According to the Club Sports Governing Board constitution—which outlines club sport requirements at Columbia—any club seeking recognition “must not duplicate another club sport or a varsity sport.” In other words, the Club Sports Governing Board will not hear proposals from a soccer club because Columbia has varsity soccer teams. As a result, Carlin’s team does not have access to the benefits of official recognition, including the vans made available for official club travel and flyering privileges on campus.

Despite Carlin’s numerous attempts to lobby on behalf of his club, the governing board has remained resolute.

“One of the reasons [for the policy] is we want to be able to promote a wider range of sports, and duplicating all those sports would limit the opportunities we have for other programs to exist too,” Jeffrey Ryder, director of physical education at Columbia, said. “We do have intramural programs that mimic—or offer the same opportunities—as those clubs that are being offered or asked about, including outdoor soccer for intramurals.”

Columbia currently recognizes 35 official club athletic teams, the sixth most within the Ivy League. For CU Club Soccer, the policy poses a great financial burden, but for Columbia, the policy is about more than funding.

Ryder stated that new clubs at Columbia must go through a training process before they can represent Columbia at other schools. When asked if the University would consider recognizing—but not directly funding—a club that would go through this training, Ryder stood by the policy.

“Because the policy currently is in place that there is no duplicate varsity sports, we’d still reference back to that, but I’d be open to having a conversation with whomever,” Ryder said.

The policy seems to protect smaller, more obscure sports that Columbia offers—maximizing the range of opportunities, as Ryder mentioned. Making the policy more inclusive, however, might not detract from other clubs. According to Kevin Gorski, president of the CSGB, adding new clubs does not necessarily take funding from the others, because club sports’ allocation from Funding at Columbia University ;is not static.

“In a lot of ways, if [CU Club Soccer] were to be recognized, and they were to become club sports… I think that would help us because it would give us a stronger case to go to F@CU to ask for more money, for a larger allocation,” Gorski said.

While Columbia is the only Ivy with this policy, other Ivy schools have considered the subject. At Brown, clubs that duplicate a varsity sport receive recognition, but with certain limitations. These clubs—like Brown’s men’s and women’s soccer clubs—are given Group B, “Competitive” status, as opposed to the “Highly Competitive” clubs in Group A. According to the Brown Club Sports Handbook, Group B teams receive fewer resources and are prohibited from hiring a coach.

Conversely, at Harvard, which offers an Ivy-leading 67 athletic clubs, club soccer receives about $2,000 a year from Harvard Athletics, as well as field space. The club has been resourced well enough to field an A and B team on the men’s side and hosts most of its games, compared to its Columbia counterpart which plays all of its games away.

According to Henry Scott, Harvard Club Soccer’s president, the team has only had to fundraise for exceptional events—like the national tournament in Tennessee—to supplement the team’s stipend and $100 semesterly dues, which are subject to each player’s ability to pay.

“I think my experience as president would be a lot more stressful if I didn’t have the privilege of being able to offer field space to other teams,” Scott said. “The staff at the athletic department really helps make this happen for us and ensures that people who want to play soccer at a highly competitive level are still able to have that option.”

Scott expressed his support for CU Club Soccer, and he is not alone. Kevin Anderson, head coach of the Columbia men’s varsity soccer team, told Spectator he is discussing how he can personally support the unofficial team, partially because of his players’ experiences with CU Club Soccer.

Sophomore defender Rory Madigan played for CU Club Soccer his first year at Columbia and then joined the varsity team a year later. He said he appreciated his time spent playing for the club team and believed Columbia should offer some sports at multiple commitment levels.

“I get that they’re trying to make the most amount of sports available to everyone,” Madigan said. “But soccer’s such a popular sport and there’s so many kids that don’t want to have all of the time commitment that comes with a varsity sport.”