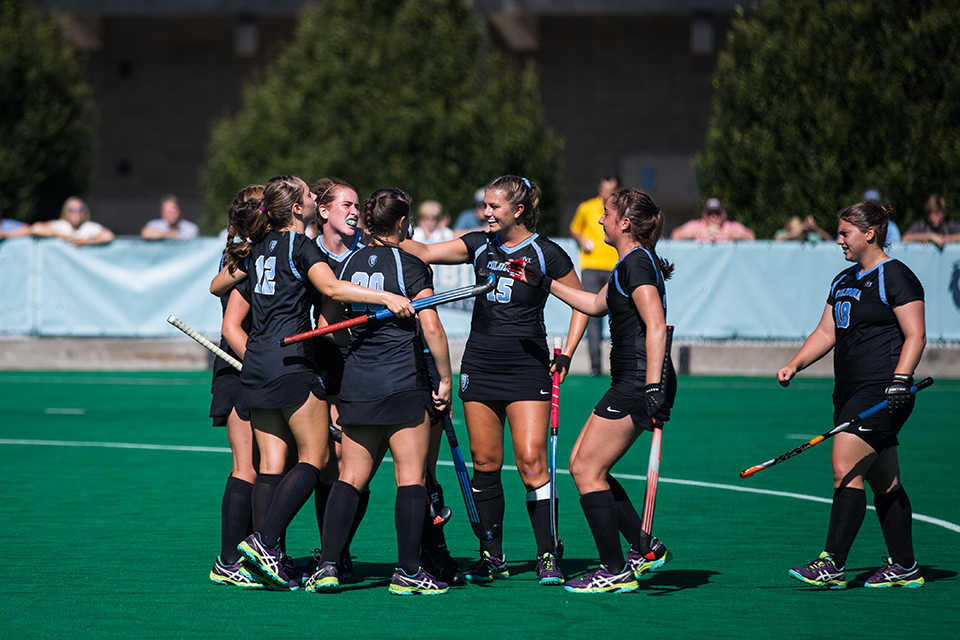 Nelson-Nichols has started her third year coaching at Columbia, and her team philosophy is solidifying.

In 2012, Caroline Nelson-Nichols competed for the United States in the London Olympics. Three years later, in 2015, she became the head coach of a Columbia field hockey team that had come away one win short of capturing an Ivy League title the previous season.

Under former head coach Marybeth Freeman, the Lions finished 12-5 and 5-2 in the conference, but in Nelson-Nichols’ first two seasons the team went 9-8 and 8-9.

The majority of the team that Nelson-Nichols inherited was the product of Freeman’s recruiting, so the new head coach initially struggled to fit in her program objectives. But now, in her third season at the helm of the Columbia field hockey program, Nelson-Nichols’ vision for the team to play as a united group is starting to take effect.

The current seniors are the last to have played under Freeman. The juniors and sophomores were, in large part, recruited to Columbia by Freeman. Nelson-Nichols welcomed the first class of her own recruits this September.

“There’s always a general excitement over having recruited the player, watching them grow, and trying to figure out how they’re going to fit into your program,” Nelson-Nichols said. “The group right now is really laying the foundations for the future.”

At the beginning of this season, Columbia faced now-No. 4 Virginia and fell 9-0. After three more weeks of Nelson-Nichols’ influence, the team took then-No. 21 Saint Joseph’s to overtime before a 3-2 defeat. Columbia will play eight NCAA Top 25 opponents in total this season, the most ranked opponents they’ve played in over a decade.

Thus far, the Lions have maintained a record consistent with the past three years that Nelson-Nichols has been the coach, despite stronger competition.

Nelson-Nichols’ team, with a mélange of experiences, is in the midst of learning and applying not only the style of coaching that she brings to the table, but also the culture that she wants the program to have.

“I think any transition to a new coach is like a new regime, so getting your feet under you must be difficult,” senior forward Whitney Hartstone said. “It’s been a smooth transition because our class took the best pieces that Marybeth had taught us and we incorporated them into everything that Caroline has taught us.”

While Nelson-Nichols herself calls her style of coaching “player-centered,” the transition to her tenure is more than just technical differences in coaching. Over the past three years, Nelson-Nichols has stressed the idea that the team is “21-strong.”

The 21-strong mentality means that at all times of the season, whether in practice or in a game, all 21 members wholeheartedly contribute to the team. Nelson-Nichols feels that this reminds players that they should be working together in every facet and that every single member is vital to the success of the season.

Nelson-Nichols has followed the 21-strong mentality throughout the season, but it is a process easier said than done.

“I think you have to empower your returners in a way to take the lead and show the first-years the ropes in a sense,” Nelson-Nichols said. “We’ve done a lot of work on our culture and trying to identify where we’re going in the future as a program. When you have those things in place, it makes it easier for the team to buy into the direction together.”

A work in progress for the team, this mentality requires participation. Each individual member is responsible for showing up with the energy and intensity that will make the difference on the field.

Sophomore midfielder Jennifer Trieschman said that this year’s team is particularly special because it brings higher levels of intensity into each practice.

“I think this year especially, Caroline has taken an approach to practice that has been, ‘They control the drill, they control the work they’re put under,’” Trieschman said. “We think we have the control when we’re saying let’s go do this all together as a team, and she’s really just guiding us along our way.”

When the team works toward this common goal together, it feels empowered by their teammates to try harder.

“I think the main piece that makes it so successful is the unity when we play and when we shift, and ‘when one person goes, we all go’—that’s what Caroline says,” Hartstone said.

Players on the field feel like they can always trust that their teammates will be right behind them, next to them, or in front of them as support, ready to do what they can to help with forward progression.

Though the Lions’ journey might not entail a conference championship in the next two years, the future looks bright for the program. With more recruits coming in under her new vision, Nelson-Nichols will continue to challenge her athletes to play each game united and to give the energy that will lead them all to success.

“Overall, it’s incredible humbling, as a coach, to know that these guys understand that they control the ship and that their energy, day in and day out, is going to be what makes the win,” Nelson-Nichols said. “And at the end of the day, that’s a big win for me.”