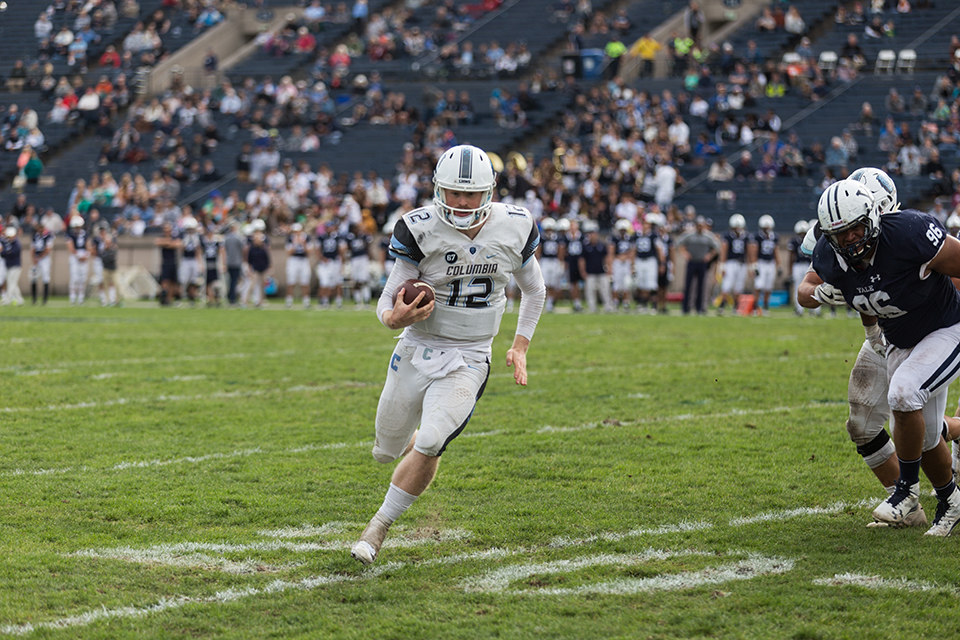 Senior quarterback Anders Hill has earned the trust of teammates and coaches and has spearheaded Columbia's rise to the top of the Ivy League standings.

Sixty-three yards later, Smith II broke across the goal line, bringing the Lions up 28-24 with less than two minutes remaining against defending Ivy League champions, the Princeton Tigers (5-2, 2-2 Ivy). This crucial moment was further heightened by the fact that Hill could not lay eyes on his receiver and had to trust that Smith II had run his route correctly.

“I knew we were going to be hot based off the protection, and I knew Ronald was going to get to the spot, so, to be honest, I didn’t really see him for a second,” Hill recalled after the game. “I just put it in the spot I knew he was going to be in.”

Explosive plays such as these have become cornerstones of the Light Blue offense thus far this season, but this fundamental trust between quarterback and wide receiver did not exist a year ago.

Since this past spring, Hill and his teammates have learned to embrace a new team culture—one that promotes trust between Lions above all else.

This unity and shift in mentality give credence to the newfound success of the football program. As the starting quarterback and co-captain of the team, Hill is expected to embody this new culture as emphasized through the team’s motto, “EAT,” which stands for effort, accountability, and team.

Hill adopted this new creed in full swing this past summer, going to work on Wall Street around 6:30 a.m. every day and then trudging back uptown to Robert K. Kraft Field in the evenings to practice with his teammates. Coaches are not allowed to interact with their players over the summer, so it was up to Hill and his co-captains—offensive lineman Bewley Wales, defensive lineman Lord Hyeamang, and defensive back Landon Baty—to coordinate practices and workouts for their teammates.

Although the quarterback has acted with his fellow seniors to promote a team culture of success and solidarity, Hill has taken the extra time and dedication to hone his craft. By giving extra attention to detail and throwing after practice with his receivers, Hill’s ambition has benefited the rest of the team.

Head Coach Al Bagnoli marvels at how Hill has led his teammates to strive for continued excellence on the field.

“I think that’s a byproduct of all the time and energy that he’s put into watching film, getting out here and throwing with his receivers, spending time with Coach Santos and Coach Fabish and the offensive staff,” Bagnoli remarked. “Really, it’s a testament to his work ethic.”

Hill has shown tremendous improvement over his four years at Columbia. Although the Colorado native was a highly anticipated recruit, Hill had a rocky road achieving his starting position before finally rallying the Light Blue and fellow captains behind him for a winning season.

Finally grabbing the helm of the quarterback position halfway through his junior season, Hill became a dedicated student of the game. Working with quarterbacks coach Ricky Santos, Hill focused on learning every detail of every play that the Lions offense runs and sought to set an example for his younger teammates.

“I think, especially with the quarterback position, you’re always kind of put in a leadership position,” Hill remarked. “Then, as a senior on top of that, and then being elected a captain, it’s really important. You have to lead by example with everything you do.”

As the Light Blue heads into week eight, it still holds a 6-1 record—a feat that has not been replicated since 1996. Hill adds to that legacy as the Columbia offense currently ranks second in the Ivy League, with Hill averaging 262.6 passing yards per game. Acting as a double threat, Hill can also match his running backs—during Homecoming against Penn, he led the team in rushing yards.

While most of this prosperity should be attributed to a new coaching staff and the recently developed team culture, Hill has prided himself in improving the team’s camaraderie.

“I want to be friends with every single guy,” Hill said. “I try to hang out and talk with as many guys as I can in the locker room. … I want them to know that I genuinely care about them.”