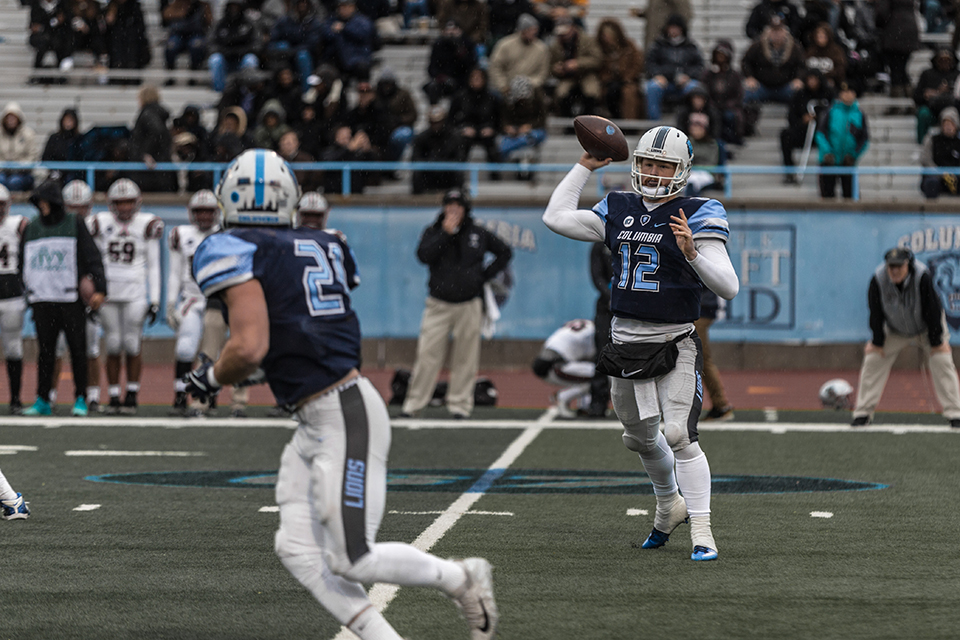 Senior quarterback Anders Hill helped lead the Lions to their second-place finish in the Ivy League.

Football ended its season on Saturday, defeating Brown 24-6 to finish second in the Ivy League, the team’s best season since 1996. Here are four reasons why this season was the Lions’ best in over 20 years.

This year, the Lions emphasized leadership on both sides of the ball. Senior quarterback Anders Hill and senior free safety Landon Baty led the offense and defense, respectively, by example throughout the season.

An offensive powerhouse all year, Hill led the Ivy League in total offensive plays, with 443. He also proved his resilience this season, starting every game despite getting sacked 38 times this year, more than any other Ivy League quarterback. In terms of production, Hill was virtually unstoppable, with 2,550 all-purpose yards and 19 total touchdowns, placing second and third in the Ivy League in those categories and leading the Light Blue in both categories.

Baty led the Ivy League this season with four interceptions. He also forced two fumbles, tying for fourth in the league. His 66 tackles were good enough for eighth in the division, trailing his fellow junior free safety Ryan Gilbert, who had 95. After enduring a difficult season earlier in their college careers, Hill and Baty generated a substantial effort this season that put the Light Blue in second place in the Ivy League.

Head coach Al Bagnoli won two Ivy League titles by the end of his third year after starting at Penn in 1992, but restarting the Columbia football program didn’t prove to be as simple. After a number of seasons ranging from winless to mediocre, everyone affiliated with the Lions was surprised at the team’s seemingly lucky 8-2 season record.

The Light Blue relied heavily on late-game heroics on both sides of the ball—more than half of its Ivy League wins came down to the last drive. At Princeton, sophomore cornerback Benjamin McKeighan picked off quarterback Chad Kanoff with a minute to spare. Junior defensive end Mike Hinton sacked Dartmouth quarterback Jack Heneghan while the Big Green was deep in Columbia territory with only seconds left in the game. Additionally, to the Homecoming crowd’s delight, Hill and sophomore wide receiver Josh Wainwright connected on a 24-yard, game-winning pass to lift the Lions over Penn. Columbia will require continuous effort to maintain its success, as evidenced by the 1997 team, which followed a triumphant 8-2 season with an average 4-6 record.

Last year, then-first-year receivers Josh Wainwright and Ronald Smith II were thrown into the fire right from the get-go, with each taking some time to adjust to the rigors of Division I football. Wainwright flashed his explosiveness early on but struggled with drops throughout much of last season, both on offense and while returning punts. Smith II, meanwhile, was barely a factor in the offense during the first half of the season.

Each receiver still managed to deliver signature performances, however, hinting at much greater potential. Against Cornell in a thrilling 42-40 shootout loss, Smith II hauled in 11 passes for 195 yards and a touchdown. In the next game, a convincing 31-13 win over Brown, Wainwright put up 150 yards and two touchdowns on just five catches for a staggering 30 yards per catch average.

When the 2017 season rolled around, the sophomores proved that those performances were just the beginning. Smith II stole the headlines early, highlighted by his 10-catch, 236-yard, two-touchdown performance in a 28-24 victory over Princeton that put the rest of the Ivy League on notice. After Smith II underwent midseason jaw surgery, Wainwright picked up even more of the slack, scoring touchdown after touchdown––most notably the game winner in a 34-31 overtime win over Penn on Homecoming––and finishing with a program record 1001 receiving yards. Smith II and Wainwright were the cogs of the Columbia offense all season, and if Smith II regains the form he showed early in the season, Columbia will have the top receiver duo in the Ivy League for the next two seasons.

Entering this season, fans wondered if a collection of green defenders could replace the production of graduated stalwarts, such as linebackers Gianmarco Rea, CC ’17, Christian Conway, CC ’17, Keith Brady, CC ’17, and cornerback Jared Katz, CC ’17. Despite 2-8 and 3-7 records in Bagnoli’s first two seasons, the Light Blue defense was generally solid, while the offense floundered.

Heading into this year, it looked as though the script might be flipped.

Columbia’s defense wasn’t perfect, but it usually did enough to win, smothering inferior opponents and making timely plays––such as Michael Murphy’s overtime tackle for loss that put Penn behind the chains on its first drive and ultimately forced a field goal try––against more explosive offenses. Overall, Columbia gave up just 17.5 points per game, good enough for second place in the Ivy League, and the Lions should only continue to improve as their youth gains valuable experience.

Columbia could not wrap up the title this season, but its impressive season could spell a dynasty in the making. With Bagnoli at the helm and young players at key skill positions, the Light Blue looks poised to continue its winning ways in the Ivy League in the coming years.