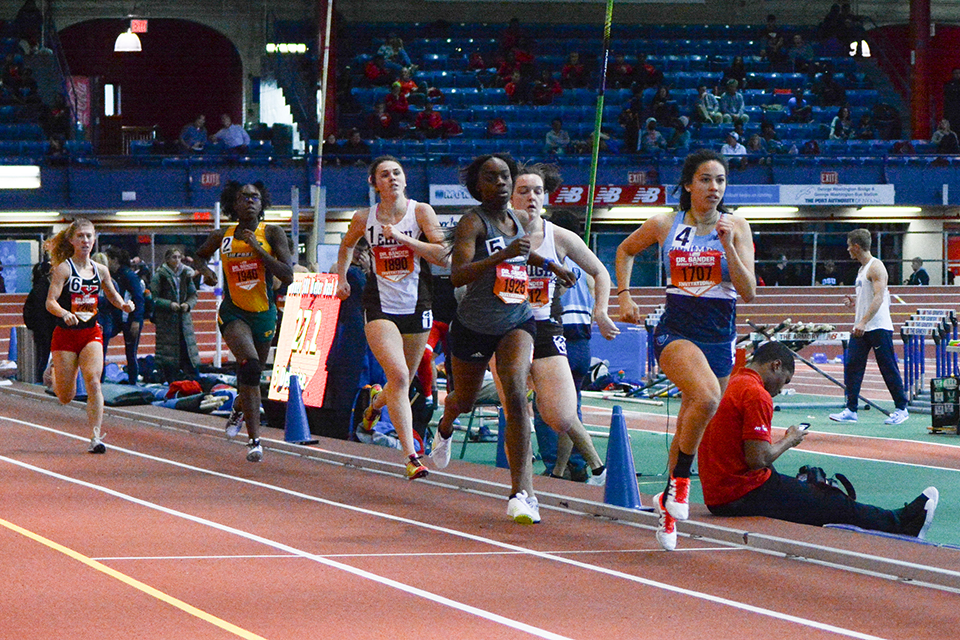 Most of the Lions will head to Staten Island for this weekend's competitions, but the women's relay team will head to Washington Heights for the highly-competitive Millrose Games. KJ Mulam / Staff Photographer

Indoor track and field will compete in the Metropolitan Championships this Thursday and Friday, and then at the Villanova Invitational on Saturday at the Ocean Breeze Athletic Complex in Staten Island.

The women’s 4x400 and 4x800 relay teams will also compete in the Millrose Games at the Armory Track on Saturday. The Lions competed in both the Metropolitan Championships and the Villanova Invitational last year.

The men’s side boasted a fourth-place finish from senior Brian McGovern, who had a time of 1:54.16 in the 800-meter run, and a sixth-place finish from sophomore Jacob Caswell, who ran the 1,000-meter with a time of 2:32.17. Sophomore Hunter Hasley contributed to the team’s top finishes when his 13.36-meter clearance earned him seventh place in the shot put.

Although Columbia hopes to improve on last year’s finish, individual Lions will also use this weekend to experiment with different events.

“Some are competing at Mets in some different events just to try out some other events to get away from their normal event they’ve been running every week,” coach Daniel Ireland said. “The kids are going to compete hard wherever we line up.”

At last year’s Villanova Invitational, Columbia competed against schools including Princeton, Swarthmore, and South Florida, which will not return this time around. Last year, junior Josiah Langstaff impressed in the 800-meter run, finishing with a time of 1:51.32 to secure third place for the Light Blue. Langstaff had a strong showing this past weekend at the Dr. Sander Invitational, claiming first place in the 1,000-meter run with a time of 2:23.53.

The women’s relay team, however, will not join the rest of the Lions at the Villanova Invitational. Instead, it will compete at the Millrose Games, a prestigious event that draws competition of the highest caliber.

“The women’s 4x8 is going to be taking part in a race that the team is trying to set the world record in the 4x8,” coach Ireland said. “We are obviously not as good as that team. It’s a team with top U.S. runners, but we get to be a part of that. It’s on TV. It’s a really huge meet. It’s the best indoor meet in the world.”

The Lions have impressed so far this season. At the Columbia Challenge last week, Columbia had many top finishes and sophomore Daniel Igbokwe set a new school record—15.53 meters in the triple jump.