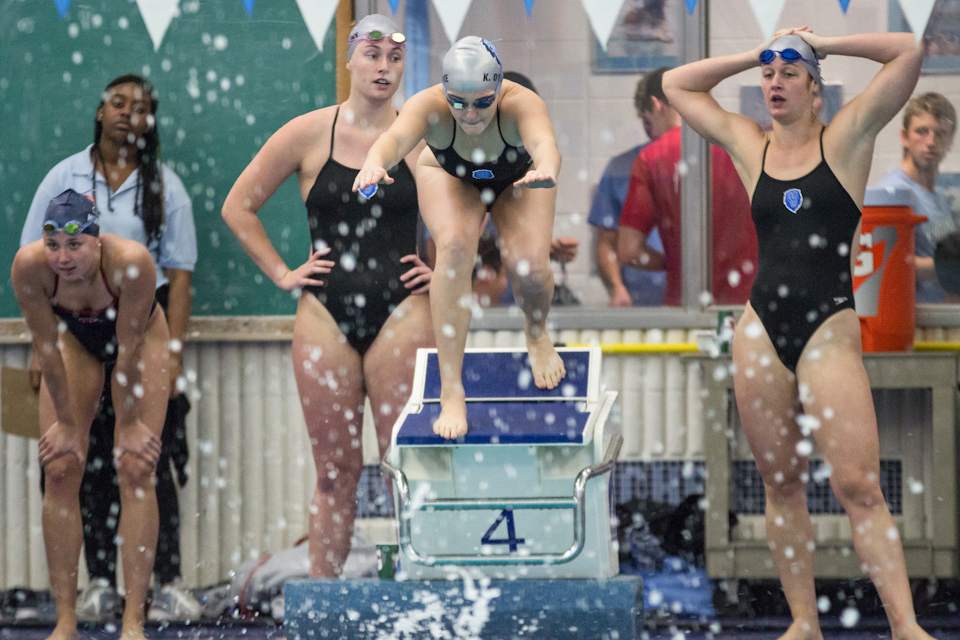 Placing fifth with 720 points, women’s swimming and diving finished off the Ivy League season this past weekend at the conference championships.

Women’s swimming and diving finished the Ivy League season at the conference championships this weekend in fifth place with 720 points.

On the second day of competition, two top five performances highlighted the day. Ashby, Zhu, senior Kate O’Rourke, and He finished the 200-yard freestyle relay in 1:31.98 for fifth place. He then earned second in the ‘C’ finals of the 200-yard individual medley.

Ashby lead the team in the 50-yard freestyle with a sixth-place time of 23.05, followed by O’Rourke and Zhu in seventh and eighth place in the ‘B’ finals.

The Lions earned a number of top finishes on the Friday of the meet. In the 400-yard medley relay, first-year Jordan Ashmore, sophomore Helen Wojdylo, Wang, and He came in fourth place at 3:42.27. Wojdylo continued with a fifth-place finish in the 100-yard breaststroke finals, followed by Antilles and sophomore Scottie Berridge in the ‘B’ finals.

Three swimmers finished in the top ten within the ‘B’ finals of the 100-yard backstroke: Ashmore, Samson, and O’Rourke. Ashmore finished first, followed by Samson in second, and O’Rourke in eighth.

This success in the ‘B’ finals continued into the 200-yard freestyle, with He and Ashby earning first and third, respectively. The 400-yard individual medley ‘B’ finals saw Phelps swim into fifth place, while senior Nicole Papsco finished in seventh.

On the diving boards, junior Kim Yang scored 222.80 in the three-meter dive for seventh place.

The fourth and final day of competition saw more high placings. In the championship finals of the 100-yard freestyle, Ashby notched another strong performance with a time of 49.88 and a fourth-place finish. In the ‘B’ Finals for the event, Zhu and O’Rourke finished in third and eighth, while , Columbia swimmers dominated the ‘B’ finals with three top ten finishes in both the 200-yard backstroke and 200-yard breaststroke. Finally, the 400-yard freestyle relay team set a program record with a time of 3:20.78, coming in fifth place.

Harvard took first place at the conference with 1616 points, followed by Yale with 1490.5 points, and Princeton with 1301. Brown finished just behind the Lions with 712 points, and Cornell and Dartmouth occupied the bottom two spots.