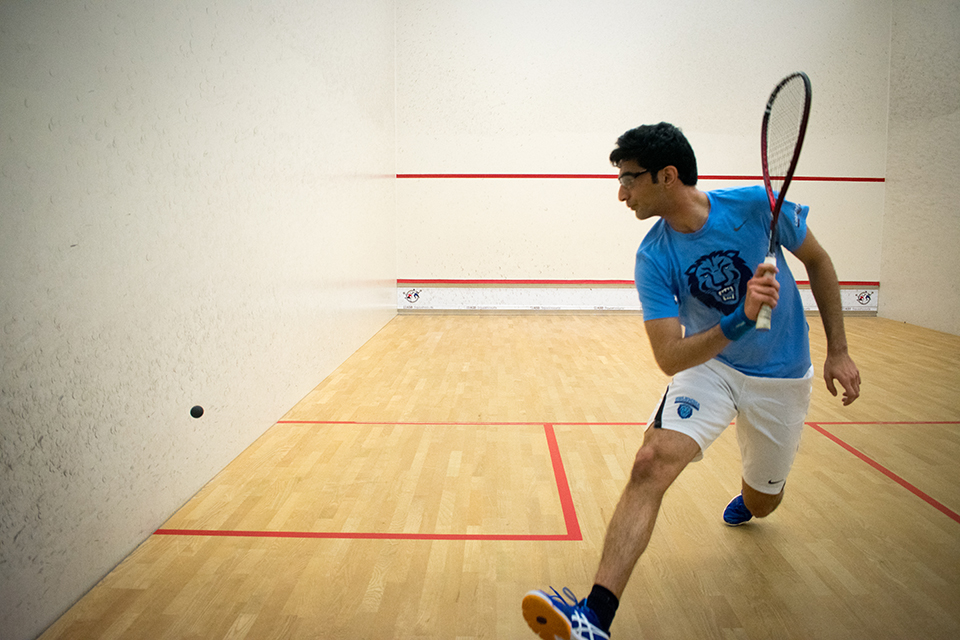 Men's squash will head to Hartford, Connecticut for the national championships this weekend, seeking to bring home a first-ever national title to Morningside Heights.

No. 2 men’s squash will round out its record-breaking season at the College Squash Association National Team Championships this weekend in Hartford, Connecticut. The Lions will play a series of three matches against top-ranked teams in the Potter Cup (A Division) beginning with No. 7 Rochester on Friday.

Columbia (14-1, 7-0 Ivy) enters the tournament as Ivy League champion for the first time and is positioned in its highest-ever seed, second behind No. 1 Trinity (17-0).

In their last match against conference competitor No. 6 Penn (10-5, 4-3 Ivy), the Lions secured a sensational 5-4 victory over the Quakers to capture the Ivy League title and solidify their second-place seeding at nationals. Having already clutched a top finish in its notoriously competitive conference, Columbia now looks to achieve a first-place national finish.

A second title seems especially possible for the Lions this season, who have all the makings of a championship team. Columbia is captained by reigning CSA Individual National Champion and three-time Ivy League Player of the Year senior Osama Khalifa. Along with Khalifa, first-year Velavan Senthilkumar, who plays in the two position for the Lions, recently received first team All-Ivy honors, contributing an impressive 12-1 individual record in his breakout season. Both Khalifa and Senthilkumar were unanimous selections this year.

In addition to Columbia’s potent combination of experienced leadership and emerging talent, the team also has a strong coaching staff. Head coach Jacques Swanepoel was named the Ivy League Coach of the Year for his second time ever this season. He has headed both the men’s and women’s squash teams since the programs transitioned from club to varsity sports in 2010, leading both teams through the ranks every year. While men’s squash is now competing for a national title, women’s squash finished its season with its best-ever seventh-place ranking last weekend.

Although men’s squash has certainly proved its tenacity in the 2017-18 season, it will be up to the Lions to deliver over the next three days if they want to add a national championship to their legacy. Last season, Columbia fell to current No. 3 Harvard 5-4 and No. 4 St. Lawrence 6-3 in the second and third rounds of the tournament, respectively, after shutting out current No. 12 Drexel in the first round of competition.

This year, Columbia will begin its quest for redemption on Friday against familiar opponent Rochester (8-6). This will be the second time this season that the Lions face the Yellowjackets. Columbia defeated Rochester in late January 6-3, and the Lions have not altered their lineup in subsequent matches.

If the Lions win on Friday, they will play the victor of the matchup between Harvard and Penn on Saturday. Columbia defeated both teams by the same 5-4 margin in historic matches this season. Columbia beat Harvard for the first time ever to usurp the second spot in mid-January. It then defeated Penn to maintain the second-place ranking and win the program’s first-ever Ivy League title two weeks ago. A victory over either team this weekend would contribute another historic moment to the season, as the Lions have yet to defeat both teams in the national tournament setting.

Men’s squash will seek to become the nation’s best team and cap off its historic season in its final three matches of the season beginning on Friday, Feb. 23 against Rochester at 4 p.m. in Hartford, Connecticut. Columbia will then play again on Saturday and Sunday, with times and opponents to be announced.