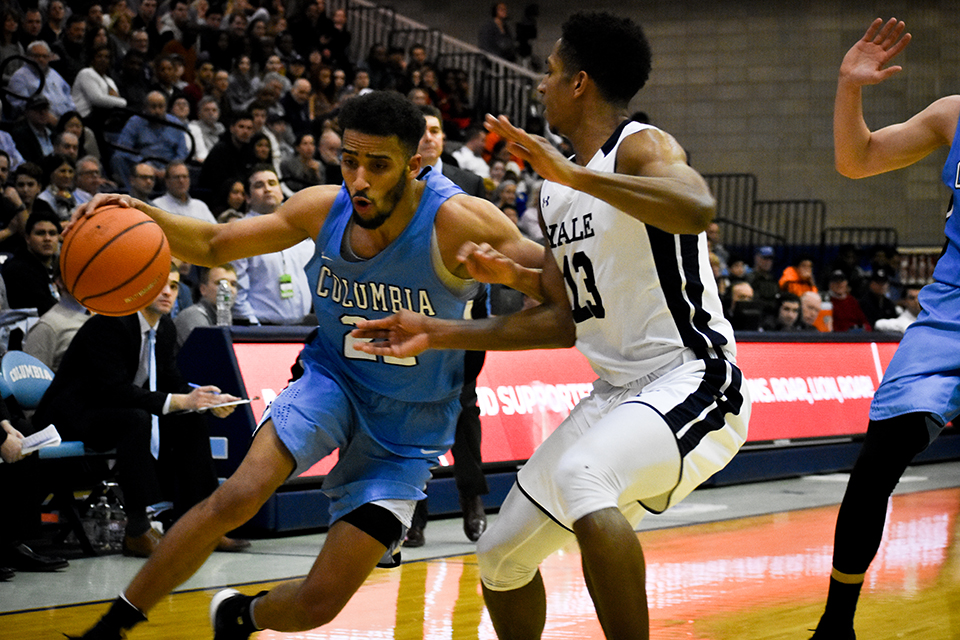 Senior guard Nate Hickman finished with 17 points in 34 minutes in the final regular season home game of his career, but could not lead the Lions to victory against Yale.

The Lions (8-17, 5-7 Ivy) finished their Ivy home slate Saturday, honoring their two senior guards, Kyle Castlin and Nate Hickman, who made their final home appearances of the regular season. Hickman finished with 17 points and five rebounds, while Castlin collected 12 points and three steals in what was otherwise a disappointing performance as a whole for the Lions.

“I think when we don’t see the ball go through the rim, it becomes a slog for us,” head coach Jim Engles said of his team’s poor shooting from long range. “We started to create enough pace in the first half, but we just didn’t get enough stops.”

Columbia came out with early fire, leading for the majority of the first ten minutes. Hickman and Castlin both led with baskets at the start of the game, and Yale had to call a timeout less than five minutes in thanks to early Light Blue pressure.

The Bulldogs (14-14, 7-5 Ivy) took the lead with 8:35 remaining in the first half and never looked back, failing to relinquish that margin for the remainder of the game.

Yale’s early success came specifically from forward Blake Reynolds, who registered a gameleading 11 points and three rebounds in the first 20 minutes—the Bulldogs generally looked limp without the Jackson, Missouri native. He would be essential to Yale’s victory, finishing with 17 points on 8-of-14 shooting from the floor.

The Bulldogs would pull away near the end of the first half. After four consecutive lead changes, Yale’s guard Azar Swain drained a three-pointer to give Yale the lead. One layup from the Bulldogs’ guard Alex Copeland and two more from Reynolds would give the away team a 24-16 lead with five minutes remaining in the first half.

The Lions would revitalize its offense in part by sophomore forward Patrick Tapé corralling two crucial offensive boards to give the Lions a much-needed lifeline. He would finish the game with six points and nine rebounds, all of which came in the first half. Hickman would then capitalize on an open shot from three-point range to cut the lead to as little as two.

But that was the Lions’ only three in the first half. The Light Blue floundered from beyond the arc, the key factor in its eventual downfall.

Just as it became a one-possession game, Yale would shift into gear, finishing the half off on a 7-0 run, culminating in a buzzer-beater three from forward Noah Yates, enervating the Columbia faithful. The Bulldogs led 37-27 at halftime.

Overall, the first half would be disappointing for Columbia, especially offensively. Junior forward Lukas Meisner and junior guard Quinton Adlesh struggled immensely. They finished the half a combined 2-12 from the field, sinking none of their six combined three-point attempts.

After halftime, the Light Blue completely changed its game plan. After only scoring a dismal one out of 12 shots from beyond the arc, the Lions looked to drive in the paint and draw fouls.

However, the switch would pay dividends at the beginning of the second half. Through several productive Columbia drives, and six points from Castlin, the lead would be as low as four points.

Around the midpoint of the second half, Yale began to conduct long, successful possessions, and it would take Meisner’s first three of the game to spark the offense back into life. After stealing an errant Yale pass, Hickman would hit another shot from long range, giving life to the Columbia crowd and narrowing the gap to three points with just under 10 minutes remaining.

With just under eight minutes remaining, Castlin would make a basket just as the shot clock expired, getting fouled by Reynolds in the process, his fourth of the game. The shot would be reviewed and confirmed, much to the chagrin of Yale head coach James Jones, and Yale only led by four once again.

Through a series of missed shots by sophomore guard Mike Smith and Castlin, the Bulldogs extended their lead to nine. Layups from guards Miye Oni and Trey Phills, as well as a three from Swain, gave Yale a nine-point advantage.

With two and a half minutes remaining, Meisner picked up an integral offensive rebound and converted, decreasing the deficit to five. However, on the next possession, Oni would eurostep past three Light Blue defenders and score a layup. Oni was another point person for the visitors, registering 26 points and nine rebounds.

Following a missed Meisner three, Oni made two more free throws and the deficit became nine points. That lead would increase to as high as 13, capped off by an emphatic dunk by Reynolds following lackadaisical Light Blue defending. The game ended on an absurdly long range trey from Hickman, but it was too little, too late as Yale was victorious.

Engles praised Yale’s offensive strategy, noting that its efforts to isolate the Lions frustrated his team.

Even though the Light Blue could not capitalize on its opportunity to win on Senior Night, Hickman noted how important it was that there even was something to play for—since the Ivy League tournament was instated after the 2015-16 season, more teams can compete for postseason basketball.

Before the game, the families of Hickman and Castlin joined the players on the court for a ceremony honoring their time at Columbia. While Hickman’s family regularly attends games, Castlin’s family made a rare trip to send the senior off in his final home game—a moment that perhaps meant more in the long run than getting a result.

“It meant a lot [to have them out on the floor before the game],” Castlin said. “As far as the game, we wanted to do better obviously, but having my family here and the fans and the love they [all] showed was definitely a positive.”

Joining the duo was Sydney Park, CC ’18, who was honored by the team for her contributions as head manager.

The Lions will be in action next weekend in their final two games of the Ancient Eight season. The results will dictate whether the Light Blue will make an appearance in the Ivy League tournament.

Columbia will take on Dartmouth on Friday and Harvard on Saturday, with tipoff slated for 7 p.m. in both games.