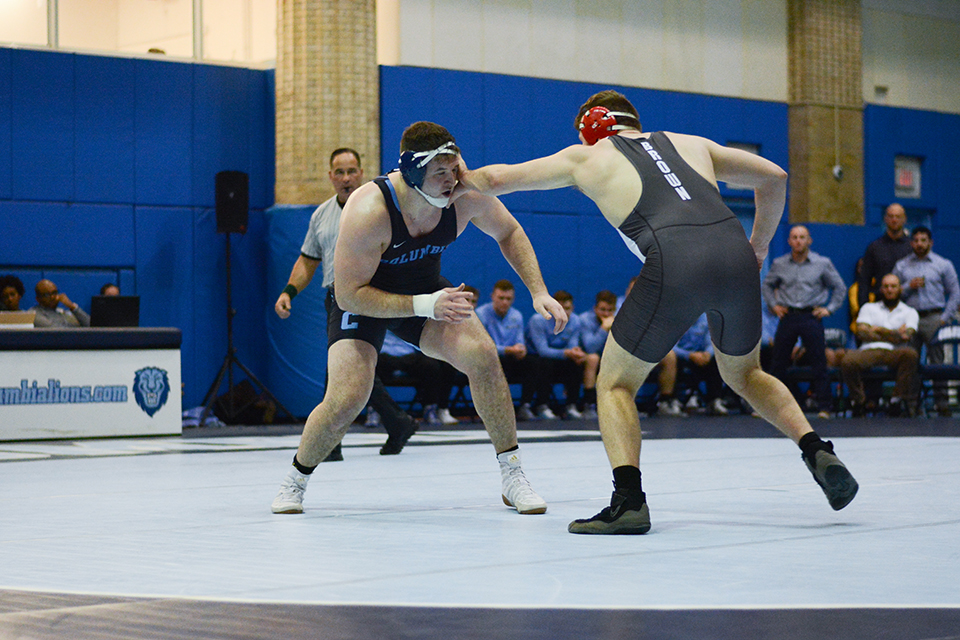 Back in February, Columbia’s wrestling team lost to Brown 19-18. This past weekend, the team placed ninth at the 114th Eastern Intercollegiate Wrestling Association Championships.

Junior JP Ascolese and senior Jacob Macalolooy each finished in seventh place in their respective divisions, seniors Tyrel White and Garrett Ryan finished sixth and fourth place in their respective divisions, and fellow senior Markus Scheidel finished as an EIWA champion. Ryan and Scheidel earned automatic bids to the NCAA Championships with their finishes, and the rest of the wrestlers will wait to see if they did enough to earn at-large bids to the tournament.

No. 15 Scheidel defeated Princeton rival No. 14 Mike D’Angelo in the final match at 157 pounds, avenging a close overtime loss from three weeks earlier. Despite the big win, Scheidel is focusing on preparing for the national tournament in Cleveland, Ohio.

“Nothing is better in wrestling than avenging a loss,” Scheidel said. “The EIWA title is a big thing for me, it’s not easy competition, but it’s just a stepping stone on to nationals in a couple weeks.”

Scheidel, an Ohio native, is excited for the tournament and is expecting to become an All-American this year and even potentially a national champion with the hometown crowd cheering him on.

Head coach Zach Tanelli echoed that sentiment, noting that the whole team will continue to work out whether they earned a bid or not.

“Our team is working out, we’re here and we’re training to do big things,” Tanelli said. “Markus is firing on all cylinders right now, for a guy that’s going in there trying to win a national title and be an All-American, [winning] is a good confidence booster.”

Ryan, the defending EIWA champion, was challenged in the semi-finals by Jordan Wood, an impressive first-year from Lehigh. Much of the competition, including Ryan, had never faced Wood before. After losing that close match, Ryan was sent to the third place match, with his automatic spot in nationals was already clinched, and he lost to Cornell’s Jeramy Sweany in another close match.

White, who has qualified for the NCAA tournament all three of his years competing for the Light Blue, ended up wrestling in the fifth-place match for the fifth and final EIWA automatic qualifying spot against a familiar opponent—Harvard’s Josef Johnson, who he had beaten twice earlier in the season. This time, however, Johnson had his measure and White lost in a tight 3-2 match.

Macalolooy, who finished eighth in last year’s tournament at 141 pounds, finished seventh after moving up to 149 pounds this year, defeating Hofstra’s Ryan Burkert relatively easily in what may be the final match of his college career.

Ascolese started the season competing with multiple teammates for the spot Macalolooy left open at 141 pounds, and Tanelli was happy with his performance in finding his way to the podium.

“I think JP placing in the tournament from where he started the year, I think that’s a pretty big accomplishment,” Tanelli said.

Five wrestlers of the 10 in Columbia’s starting lineup earned a place on the podium in a grueling second day of wrestling with around 12 hours of almost non-stop action over two days.

After countless video reviews, arguments, and coaches challenges coming from all sides, Tanelli was pleased with the overall results. Even after the draining weekend, he stressed that the Lions would be back in the gym as soon as possible.

“It was an emotional weekend, highs and lows, like every conference tournament,” Tanelli said. “Overall it was a positive productive weekend, but still a lot of work to be done.”

Despite the emotions the Light Blue wrestlers and coaches went through this weekend, Tanelli made sure to note that this was still just one weekend, and that there’s another big weekend to come.

“We’ll have a lot of time to scout the bracket for those that we have coming [to the national tournament],” Tanelli said. “This tournament is everything this week and then it’s nothing, it’s a qualifier and we move forward.”

Scheidel and Ryan—along with whichever wrestlers may earn an at-large bid—will head to Cleveland for the NCAA Wrestling Championships taking place March 15-17.