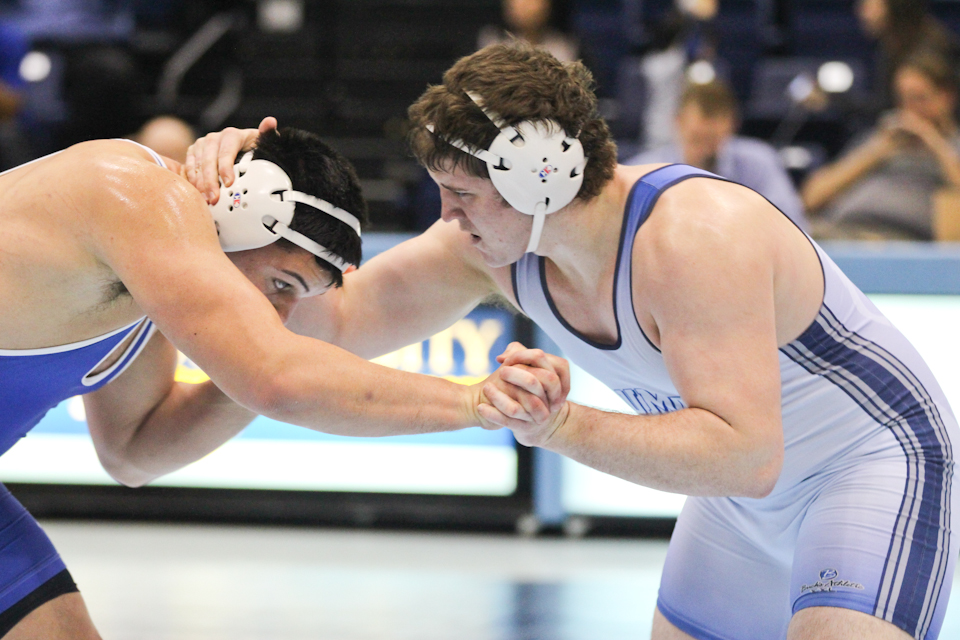 Senior Garrett Ryan will be among three wrestlers who will take to the mat in Cleveland this weekend for the NCAA Championships.

The senior trio will all be competing in their fourth NCAA tournaments of their wrestling careers, capping off impressive college careers with one final chance at becoming All-Americans. Scheidel and Ryan automatically qualified for the tournament by finishing first and fourth in their respective divisions at the Eastern Intercollegiate Wrestling Association Championships, while White was one place from earning an automatic bid and was instead given an at-large bid.

Head coach Zach Tanelli noted that instead of preparing for individual opponents, the coaching staff has instead worked on making sure that the three wrestlers’ bodies have recovered from the grueling season.

“[We’re] just fine-tuning their bodies right now more than anything,” Tanelli said. “Just getting their bodies healthy, we’ve been doing a lot of recovery and really short workouts, short practices, making sure they’re telling themselves that their bodies feel good.”

Even though only three wrestlers are going to the tournament, the Lions have all been practicing the last couple weeks to provide support for their teammates and show that they are still a team.

“Whether we have three guys or ten guys going, they’re all a reason why we have three people going,” Tanelli said. “I think it’s important that they show these three guys this support, it all helps to have everyone stick around.”

Scheidel finished the season 19-2 and is currently on a seven-match win streak after avenging one of his two losses of the season in the first-place match at the EIWA Championships against Princeton’s Mike D’Angelo. He is the 10th seed in the 157-pound bracket and will be up against Edinboro’s Andrew Shomers in the first round of the tournament.

Ryan, who is not seeded despite a 30-6 finish to his senior season, will be matched up against the No. 8 seed in the 285-pound bracket, Tanner Hall of Arizona State. Ryan has faced Hall one time in his college career, a 4-0 decision loss during the 2016 Midlands Championships.

All three seniors are going into the tournament hoping to earn a top-eight finish, thus becoming the first All-American wrestlers for Columbia since current assistant coach Steve Santos in 2013. After three previous attempts at it for all three wrestlers, Tanelli hopes for improved results this year. Ryan and White are both 2-6 in their careers at the NCAA Championships, while Scheidel is 5-6.

“I feel great about where they are,” Tanelli said. “I just want to see them compete in a way that’s going to make them proud of themselves. I think all three of them are capable of doing some really great things at this tournament.”

The NCAA Wrestling Championships start at 12 p.m. Thursday, March 15 and continue into Friday and Saturday in Cleveland, Ohio.