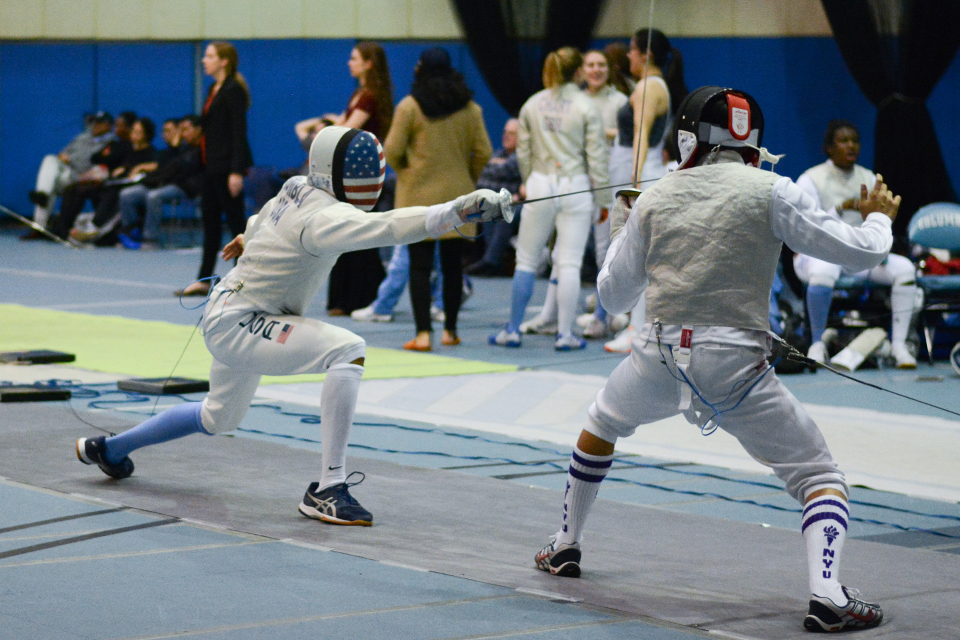 Although fencing came up just short of a team national title, junior Iman Blow captured an individual NCAA Championship in the foil discipline.

Fencing came up just short of winning the NCAA Championship title over the weekend, as they finished in second place to a strong Notre Dame side, which successfully defended the title that they won last season.

Before the event, last year’s top three finishers—Notre Dame, Ohio State, and Columbia—all looked to be in prime position to potentially take the title.

The three schools had all been successful in qualifying the maximum 12 fencers to compete in the last meet of the year, but while Ohio State had placed ahead of Columbia last year with a team of only 11 fencers, this year saw them finish behind the Lions.

“Notre Dame only won five [fewer] bouts than they did last year, so they performed at a very high level,” head coach Michael Aufrichtig said. “We definitely fought all four days, and we improved our bouts won [last year] from 152 to 170. When we won the [NCAA] Championship in 2016, we won 174 bouts, so we’re really close to our best team performance.”

On Thursday and Friday, women’s fencing began the round robin event, winning a combined 86 bouts. This was followed by the men’s squad on Saturday and Sunday, who posted a similar total of 84 bouts across épée, sabre, and foil.

In addition to the round robin format, the top four finishers of each weapon competed in a single-elimination bracket, with the winner being crowned as an Individual NCAA Champion. The Lions had four team members who finished in the top four of their weapon’s round robin event: junior Iman Blow, sophomore Sam Moelis, and first-years Sylvie Binder and Sidarth Kumbla, all foil fencers.

In the women’s foil event, Blow captured the NCAA Women’s Foil title, marking the first women’s foil title won by Columbia since 2010. Blow was drawn against fellow Lion Binder in the semifinals, winning 15-7. The final then saw Blow take on Notre Dame’s Sabrina Massialas, whom she beat 15-13.

The men’s event featured another all-Columbia clash in the semifinals, with Moelis beating Kumbla 15-9. Moelis then went on to lose to Notre Dame’s Nick Itkin in the final, 15-8.

“Iman was on fire all day, as well as Sylvie,” Aufrichtig said. “Sam’s a sophomore, Sidarth’s a freshman, and it’s great seeing two young fencers up in the top four.”

While the team’s graduating seniors will leave with the memories of the two NCAA Championship titles they won as first-years and sophomores, Aufrichtig notes that the team’s current sophomores and first-years are still hungry for the chance to win a national title of their own.

“The graduating seniors have a track record of first, first, third, and second in the NCAA Championships, which is like a dynasty. The sophomores have a third and second which is great, but they’re still hungry for a national title,” Aufrichtig said. “There’s a good feeling in our team that we have accomplished so much this year, but we’ll still come back next year looking to better ourselves a lot more.”