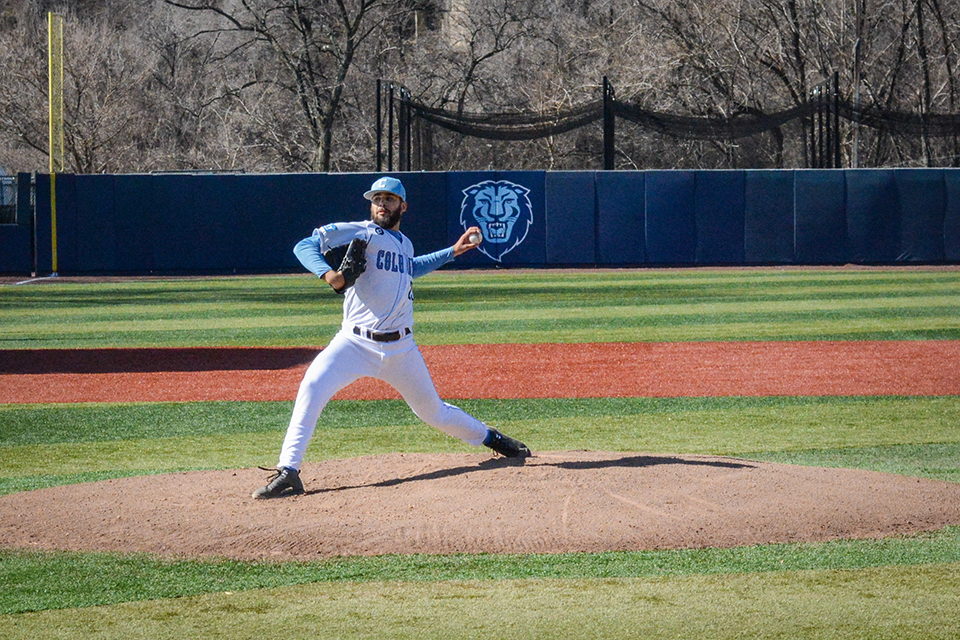 The Light Blue's pitching staff was inconsistent this weekend but was supported by its relief pitchers.

Baseball could only finesse one of its three games at Dartmouth this weekend, losing two of three in Hanover.

The Light Blue (9-20, 5-4 Ivy) came into this weekend’s series on its longest winning streak this season, having defeated Harvard twice and St. John’s in its past three games. The Lions struggled to keep up with Dartmouth’s (7-14-1, 3-2-1 Ivy) explosive offense. However, thanks to a powerful offensive performance on Sunday, the Light Blue salvaged at least one win in an otherwise disappointing weekend.

The Big Green started off the series with early offensive success, scoring all five of its runs within the first two innings. First baseman Matt Feinstein’s three-run home run in the bottom of the second inning was the last scoring play for Dartmouth, and would prove to be all it needed to secure victory in the first game of the series.

On the mound, senior right-handed pitcher Ty Wiest had another rough afternoon, exacerbating his poor start to the season. He only stayed in the game for three and one-third innings, giving up five earned runs off seven hits. However, both Light Blue relievers, sophomore right-handed pitcher Jordan Chriss and sophomore left-handed pitcher Leo Pollack, excelled on cleanup duty. The two gave up only four hits combined, striking out three batters in four and two-thirds scoreless innings.

Senior catcher Lane Robinette had a productive day, driving in three of Columbia’s four runs, with a sacrifice fly and a two-run home run. Senior second baseman Randell Kanemaru uncharacteristically had a rough day at the plate, going zero for five and snapping his 46-game on-base streak.

The Lions came out firing in the first game of Sunday’s double header, scoring in each of the first three innings. Once again, however, Dartmouth also thrived by scoring early runs, notching seven in the bottom of the third. Both starting pitchers had tumultuous afternoons, each exiting the game with no more than three innings pitched.

Sophomore designated hitter Liam McGill went three for five, registering two RBIs, one of which came off his fourth home run of the season. Sophomore left-handed pitcher Ben Wereski had a rocky day pitching, giving up seven runs on six hits. He still managed to score six strikeouts on an otherwise forgettable afternoon.

Both the Lions’ offense and defense shined in the second game of the double header, as they fended off the sweep with a dominant defeat, the largest margin of victory by either team all weekend. Even though it had to come back from two runs down after two innings, the Light Blue slowly but surely cracked the Big Green.

The Light Blue clicked on offense, primarily behind the bat of junior first baseman Chandler Bengtson. His two three-run home runs in the sixth and the eighth innings saw Columbia take advantage of a worn out Dartmouth pitching staff. The Lions scored at least one run in four consecutive innings, following the Big Green’s two runs in the second inning, and never looked back.

Senior right-handed pitcher Harrisen Egly had the closest attempt to a quality start of any Columbia player of the weekend. He only allowed two earned runs on four hits in five and one-third good innings.

The Lions will be back in action against Monmouth this Wednesday at 3 p.m., and again this weekend when they travel to Providence for a three-game series against Brown.