Softball sweeps Brown, moves above .500 on the season for the first time

Softball sweeps Brown, moves above .500 on the season for the first time 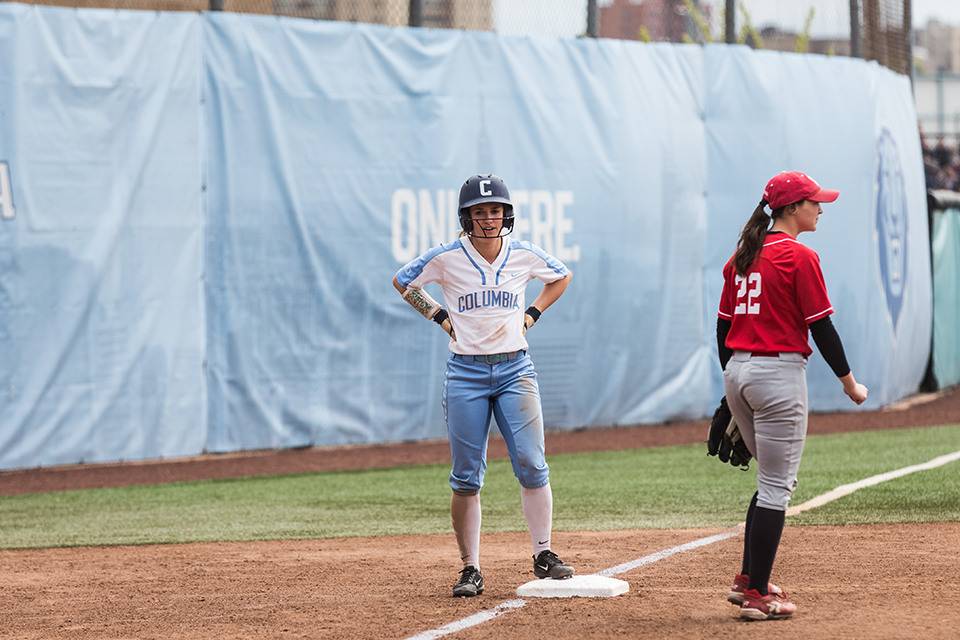 A softball player stands on third base, waiting to be brought home by the batter—the Light Blue excelled this past weekend, and it looks to continue that momentum.

Softball had its best Ivy League series of this season against Brown this past weekend, winning all three games and ascending to third place in the Ancient Eight standings.

Columbia started out the series red-hot in the first game on Friday, scoring all eight of its runs in the first and third innings. The Lions followed a two-run first inning with six straight extra-base-hits to begin the third: back-to-back homers by senior infielder Madison Gott and sophomore outfielder Sommer Grzybek, a double by senior second baseman Taylor Troutt, a triple by first-year third baseman Max Ortega, a double by junior infielder Alexandra Yule, and a home run by sophomore catcher Amanda Nishihira.

The Lions would not score again all game, but that inning provided more than enough cushion for a win. Sophomore starter Erin Gallo carried the Lions on the mound, giving up two earned runs and striking out seven Bears in six-and-two-thirds innings before senior Maura Lynch relieved her and got the final out.

The first game Saturday was more of the same: a three run first inning for the Lions followed by lone runs in the third, fourth, sixth, and seventh innings. Troutt and first-year infielder Maria Pagane continued their individual red-hot hitting—Troutt went 3-3 at the plate with two RBI, while Pagane went 2-2 and hit her seventh home run on the season, tied with Nishihira for the team lead. Grzybek added her fourth home run of the year on the second pitch of the third inning.

Sophomore starting pitcher Madison Canby punctuated the Lions’ utter domination with her best outing of the year, a complete-game shutout that saw her give up just four hits. It was her sixth complete game but her first shutout this season.

Brown, to its credit, put up much more of a fight in the third and final game Saturday afternoon, matching Columbia’s three-run second inning with a three-run fourth inning to tie up the game. Gott, however, was not finished, batting in a run in each of the fifth and seventh innings to lock up a 5-3 win.

Gallo got the start again in the final game but, after throwing 119 pitches Friday, was pulled for Lynch with no outs in the fourth inning after walking the first batter. Lynch allowed three runs in the frame but settled down and got the win with three scoreless innings.

The sweep brings the Lions to 17-16 with just seven regular season games left. The team will look to extend its four-game winning streak when it travels to face Monmouth Wednesday at 4 p.m. Columbia then hosts Princeton this weekend for its penultimate Ivy League regular-season series.