Baseball finishes season after losses to Florida, FAU in the first round of the NCAA Tournament

Baseball finishes season after losses to Florida, FAU in the first round of the NCAA Tournament 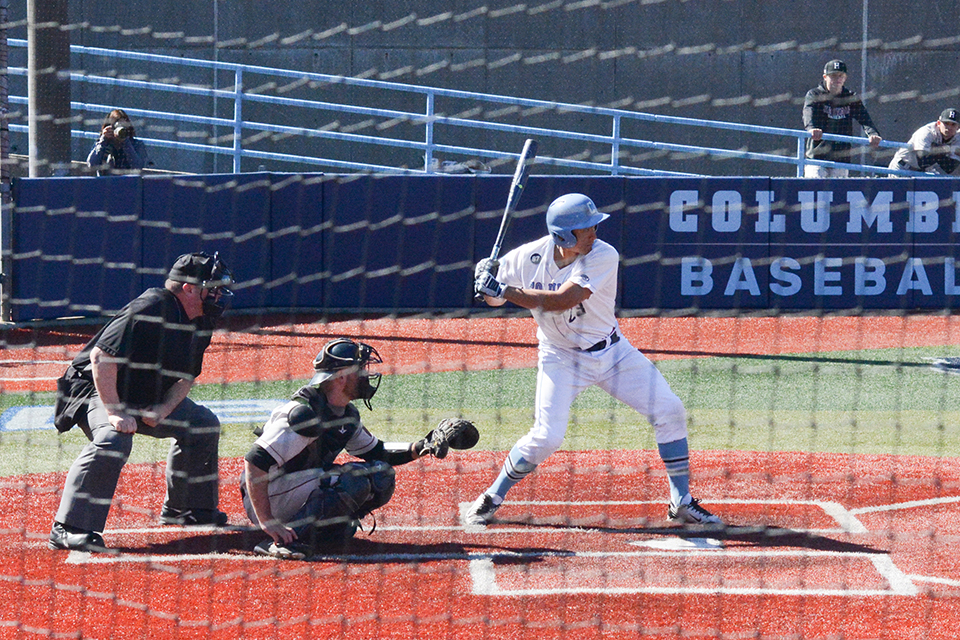 Senior third baseman Randell Kanemaru delivered on a pivotal play early against Florida, but it wasn't enough for the Lions.

Randell Kanemaru approached home plate at the top of third, ready to make a statement. In his first at-bat he had watched a strike rocket past before nailing a line drive to left field which was promptly caught for an out. In the time since, the Lions had scored two runs against Florida starter Tommy Mace, who was looking increasingly vulnerable. Kanemaru bent his knees, entered his batting stance, and waited for an opportunity.

Mace started off traditional enough, dropping a low fastball near the bottom of the strike zone. Strike one. Kanemaru readjusted his stance and prepared once more. This time: a ball, landing practically in the dirt. Kanemaru exhaled. Mace attempted to regain his confidence on the mound, lowering his head for a moment before preparing for his next pitch. It was a straight fastball delivered just a little bit inside. Kanemaru made contact and watched as the ball sailed past center left field. Home run. Lions led, 3-1.

For a moment it looked possible that a Columbia team—a team which had gone 20-27 during its regular season and had struggled to find consistent offense or pitching—might just take down the giant that is Florida baseball: the defending champion, the 42-17 SEC behemoth. But just as quickly as that hope emerged and appeared to sustain itself as Mace gave up two more hits in the following at bats, it disappeared.

Florida subbed in Jordan Butler at pitcher, who quickly and quietly defused the two batters-on situation with three consecutive outs. The Gators scored one time in the bottom of the third, bringing the score to 3-2, Columbia, but the Lions were unable to expand upon their lead. Butler blanked them again in the fourth, with a fly ball and two strikeouts, leading directly into Florida’s six-run explosion in the bottom of the fourth that gave the Gators an 8-3, which they never relinquished throughout the remainder of regulation.

In their first game of the NCAA tournament, Columbia lost to Florida 13-5, due in large part to Columbia’s pitching collapse combined with their offensive inability to get anything going against the Gators’ bullpen, who held the Lions to just two runs over the final seven innings.

Despite solid performances by consisted contributors Manemaru, sophomore Right-fielder Matt Cerfolio (who registered a Columbia-high three hits), and junior first-baseman Chandler Bengtson, who managed two hits and a run scored, the Lions were unable to compete against the Florida onslaught once the Gators had captured the lead and gained control.

Likewise, Columbia saw unfortunate performances from most of their pitchers. The Light Blue featured seven different pitchers over its eight innings against Florida and, of those seven, five gave up runs. Among them was Ty Wiest, the hero of Columbia’s Ivy League Championship Series win who had pitched 11 scoreless innings over two games against Yale just a week before giving up five runs in two-thirds of an inning against Florida.

The Lions entered the Gainesville Regional round of the tournament with far and away the worst pitching stats, boasting a cumulative 5.81 ERA while allowing opposing batters to hit at a 0.301 average and score 6.5 runs a game.

This all looks even worse when compared to their three conference mates, Florida, Florida Atlantic University, and Jacksonville University, who collectively averaged a 3.86 ERA while only allowing 4.47 runs per game.

Columbia’s poor pitching continued to haunt it as it moved into its next game of the tournament against FAU (40-17). Due to the structure of the tournament, this game functioned as an elimination match, which put Columbia on unsure footing unexpectedly early in the tournament; unless the team performed well in the next contest, its previously triumphant season could end with a two-game skid.

The match was over just as soon as it started. FAU scored six runs against Light Blue starting pitcher Jordan Chriss. Chriss, who entered the tournament with a 2-6 record and a 5.47 ERA on the year, looked extremely shaky in his entire one-third innings work against the Owls. The only out Chriss was able to nab came via a sacrifice fly which netted FAU it’s fifth run of the inning. Once again, Columbia faced an insurmountable early deficit that only worsened as the match went on.

The Lions’ offense was able to get on the board twice, courtesy of a Kanemaru sac fly—scored in the bottom of the fifth with the bases loaded—and a home run batted in by sophomore left-fielder AJ Difillipo. But by the time Columbia had scored its second run, FAU had already scored 10.

The match ended in a blowout, with a final score of 11-2 in favor of the Owls. This marked Columbia’s second consecutive loss, its elimination from the tournament, and the end of a bittersweet season which saw the Lions take home yet another Ivy League title before flaming out in the NCAA tournament.

Going into next season, the Lions will lose senior starters Kanemaru and Robinette, as well as pitchers Harrisen Egly and Ty Wiest.