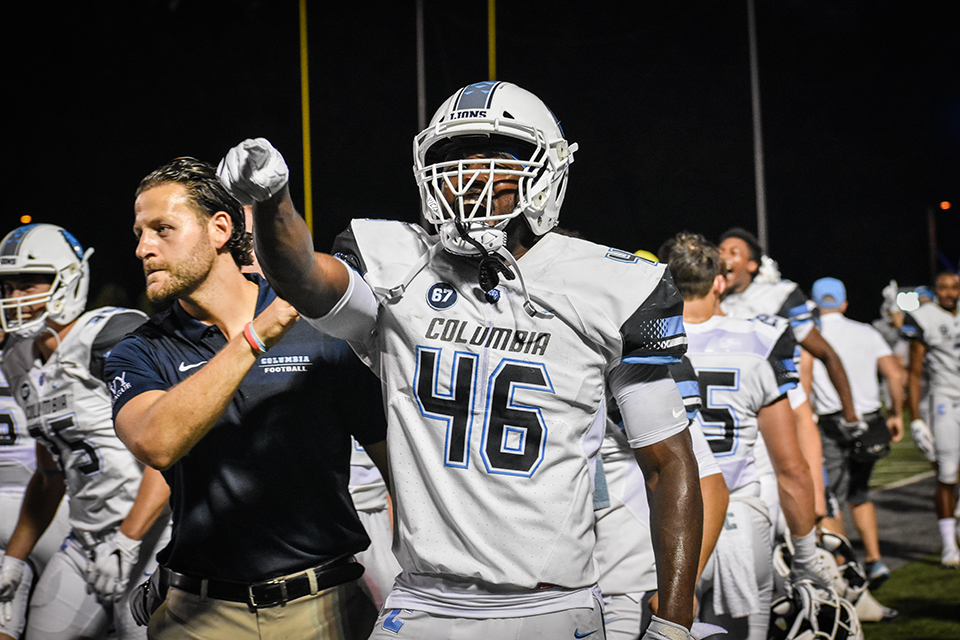 Bolstered by three turnovers by the defense and special teams, all of which came in the red zone, the Lions were able to finagle a victory against the Blue Devils, despite injuries to key players and a slow offensive start. The Light Blue was leading 17-14 at the half but outscored the Blue Devils 24-10 to claim its second straight season-opening victory.

Last season, Central Connecticut was undefeated at home, and head coach Al Bagnoli noted that he anticipated a tough game.

“Week one is so unpredictable, how your kids are going to play,” he said. “The game speed is different, the cardio is different, the pressures are different. Overall, they played hard, we executed in some areas really well, like the kicking game. But at the same time, we weren’t as consistent as I’d like us to be in certain areas.”

In his first start taking over at quarterback for Anders Hill, CC ’18, sophomore quarterback Josh Bean took two serious blows to his head and left the game in the third quarter, having already been removed from the game for two plays after the first hit.

Bean would not return and received concussion testing on the sideline. After the game, Bagnoli stated that Bean had suffered a concussion.

Wainwright finished the day with 46 yards on 4 receptions, while Bean was 11-for-19, with 128 yards and one touchdown pass.

“Unfortunately we sustained some issues on the medical front that really concerned me,” Bagnoli said. “We won’t know until MRIs either tomorrow or Monday.”

With Bean, Wainwright and sophomore running back Alexander Filacorous sidelined for the game with injuries, the Lions had to rely on offense from unlikely sources. Picking up the slack were sophomore quarterback Dillon Davis and first-year running back Dante Miller. Davis went 4-6 for 58 yards, throwing his first career touchdown pass, while Miller ran for 108 yards on 8 carries, including an 83 yard touchdown run that sealed the game in the fourth quarter.

Initially, Davis was held out in favor of first-year signal-caller Ty Lenhart. Lenhart, who collected two touchdowns in a wildcat quarterback role, was unable to jumpstart the offense and promptly handed the reins to Davis, who shined.

The contest began with two three-and-outs for Columbia. Bean went 1-for-3 for -2 yards on his first two drives. Miller began the game with a tough five yard run, but ended up losing 10 on the next drive, stifling the Light Blue’s chances of moving the ball.

The Blue Devils had struggles of their own in the first quarter, and on its third attempt on offense, quarterback Jacob Dolegala fumbled the ball on his own two yard line, giving the Lions the perfect opportunity to break the deadlock. Lenhart topped off his debut by scoring the Light Blue’s first points of the season on a two-yard sneak, later adding another score.

After two more three-and-outs, the Light Blue punted the ball to punt returner Tajik Bagley, who scampered 82 yards the other way to tie up the game. 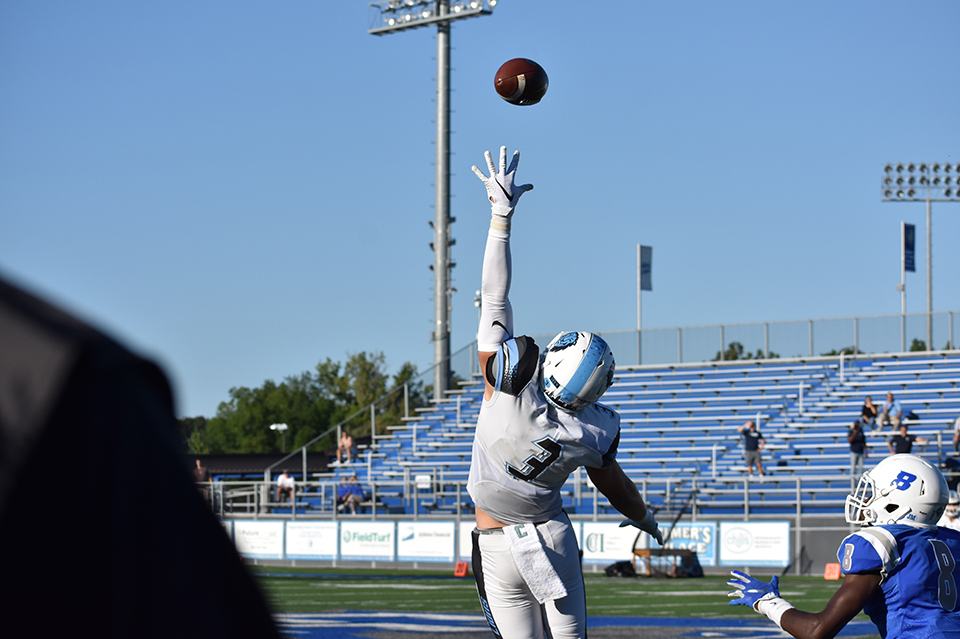 By the end of the first quarter it looked like the Light Blue had found their groove. Bean and the Lions would march down the field and register two first downs and another touchdown, this time a 19 yard pitch and catch from Bean to wide receiver sophomore Ronald Smith II to make the score 14-7. The Blue Devils would follow suit with a scoring drive just two possessions later.

However, the home team would not take an even game into halftime, as senior kicker Chris Alleyne—starting in place of the injured junior kicker Oren Milstein—knocked in a field goal with a minute and a half left, making the score 17-14. The Lions would not relinquish their advantage for the remainder of the game.

The Light Blue had to punt on its first drive of the second half, but sophomore linebacker Cameren Carter would recover a fumble on the punt return, setting the Lions up for another red zone possession. However, the Lions sputtered and could only widen the gap by an additional three points.

On the ensuing kickoff, Alleyne performed a surprise onside kick, leaving the Blue Devils on their heels. Senior wide receiver Kyle Castner recovered the ball, giving the Lions possession once again. Despite another three-and-out, the Lions recovered another muffed punt at the three yard line. The Lions made sure to capitalize on the Blue Devils’ mistake this time around, as Lenhart rushed for another touchdown, extending the Light Blue lead to 27-14.

The Lions did not slacken in the fourth quarter, finding their groove within a couple minutes. Davis linked up with sophomore Darion Acohido for his second career reception, gaining 47 yards. Davis capped off the drive with a two yard touchdown pass to junior running back Lynnard Rose. On its ensuing possession, the Light Blue scored another touchdown on the ground. Miller’s 83-yard scamper was the longest play from scrimmage by either team, putting the finishing touches on a solid overall performance.

“They (the offensive line) blocked their asses off the whole game,” Miller said. “That was great and they’ve been working the whole game so as soon as coach called the play I just knew they were going to grind so I did my part.”

“I thought he was a little bit heater skelter early trying to make too much happen,” Bagnoli said. “He is blessed with a tremendous amount of ability. He’s going to be a nice weapon to have down the stretch.”

Defensively, senior free safety Ryan Gilbert and senior linebacker Sean White led the Lions with nine tackles each. The Light Blue also registered three sacks, one from senior defensive lineman and captain Mike Hinton, in his first game in the middle of the fray, having converted from a defensive end in his final season in Morningside Heights.

“It's amazing,” Hinton said of his mindset after the game. “Coming into this game, it’s a great feeling knowing that we expect to win. We knew that they were a good team but that didn't deter us at all. coming in, we knew we had a mission to accomplish that. Doing that in front of the fans was a really good feeling.”

The Lions will take the field again on Saturday to face Georgetown in Washington, D.C. Kickoff is slated for 2 p.m.