Football looks to overcome injuries while facing Georgetown this weekend

Football looks to overcome injuries while facing Georgetown this weekend 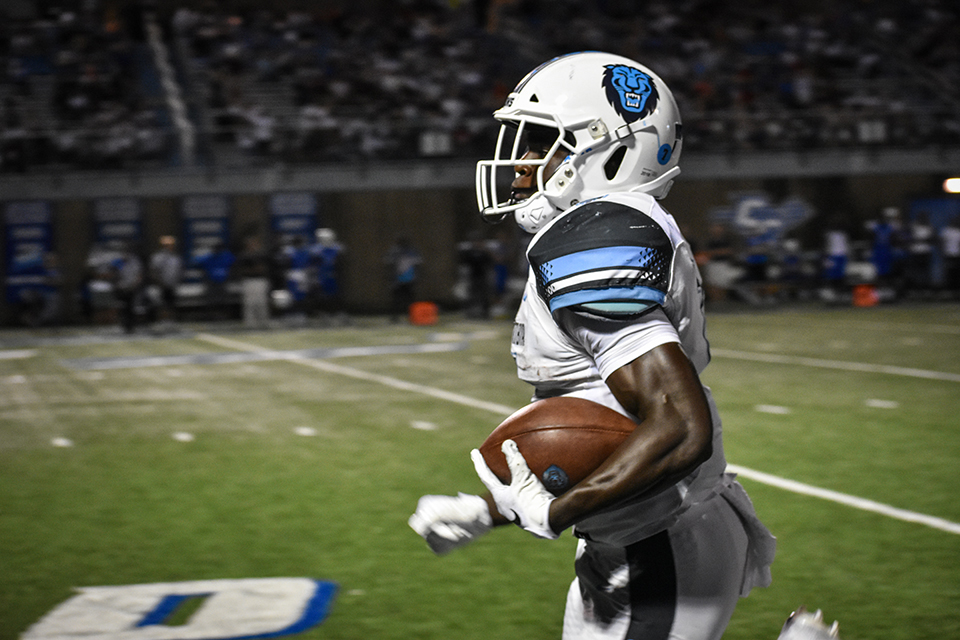 First-year running back Dante Miller will hope to build on his strong start to the season, leading the rushing attack against Georgetown this Saturday.

Football will travel to Washington D.C. this weekend to face off against Georgetown for the Lou Little Cup, looking to start 2-0 for the second-straight season.

Coming off of a 41-24 season-opening win against Central Connecticut State this past weekend, the Lions will hope to extend their nonconference winning streak with a victory against the Hoyas.

While the Lions easily dispatched the Hoyas 35-14 a year ago, this season the Light Blue will face an uphill battle, with three players injured following what head coach Al Bagnoli described as “an expensive victory” Saturday.

Junior wide receiver Josh Wainwright and sophomore running back Alexander Filacouris both tore their ACLs and will be out for the remainder of the season while sophomore starting quarterback Josh Bean was removed from the game in the third quarter with a concussion and is day to day.

Despite the injuries, the Lions ultimately pulled out a win. And while Bagnoli expressed disappointment over the injuries, he was nonetheless determined to move forward.

“Obviously, it isn’t the medical report you want,” Bagnoli said. “But it happens. … We're not canceling the season, so let's get it going.”

Bagnoli’s optimism is warranted: The class of 2022 boasted a national ranking of 14 in the NCAA Football Subdivision by HERO Sports lead writer Brian McLaughlin, and Bagnoli’s recruiting acumen as a whole has given Columbia depth unheard of in years past.

Therefore the Lions, buoyed in part by strong recruiting, will feel the loss of key contributors, but perhaps not as much as years prior. Columbia has Bagnoli’s commitment to recruiting top high school athletes to thank for this unprecedented depth.

Sophomore signal-caller Dillon Davis, who stepped in for Bean after first-year quarterback Ty Lenhart had a brief spell at quarterback, will assume the role of starting quarterback this weekend and until Bean is cleared.

Over the course of Davis’ high school career, Bagnoli noted that the experience of playing in front of large crowds in Texas prepared the sophomore for his debut against the Blue Devils.

“He's played in very significant moments,” Bagnoli said of Davis. “He's not caught up in the moment. It's nice to have that luxury.”

Alongside Davis, the Lions will hope that first-year running back Dante Miller can continue to lead the rushing attack. Miller, who rattled off an 83-yard touchdown run in the fourth quarter against Central Connecticut State, will have a role with increased scrutiny, particularly in the absence of Wainwright.

As Bagnoli explained Wednesday, Georgetown figures to adjust its game plan to the absence of Wainwright, focusing on Smith and Castner to try and limit the passing game. Thus, the running game will prove crucial, both against the Hoyas and going forward.

Defensively, the Lions allowed just 45 yards rushing and swarmed the quarterback with three sacks against the Blue Devils. Given the success of that unit, Bagnoli hoped that it would carry its success into this weekend, particularly with Georgetown playing in front of a raucous homecoming crowd.

The Hoyas will enter the game with a season record of 1-2. While they started off the season with a strong 39-14 victory over Marist, they fell to Campbell 13-8 in rainy conditions and suffered a devastating 41-0 shutout to Dartmouth. Bagnoli said on Wednesday that because of Georgetown’s varying results, it was difficult to determine what kind of team the Lions would face.

On paper, the Lions appear to have a decisive advantage over the Hoyas. Georgetown is led by quarterback Gunther Johnson, who transferred from Arizona prior to the 2017 season and has thrown for 628 yards and four touchdowns in three games.

The Lions’ secondary will be tasked with stopping Johnson and may be the strongest unit on the team. Despite giving up 320 passing yards to Central Connecticut State, most of which came after the game was in hand, the Light Blue allowed just one touchdown through the air.

Kickoff Saturday is 2 p.m. at Georgetown.