A day to remember: Football looks to recapture magic in a repeat of last year’s Ivy opener against Princeton

A day to remember: Football looks to recapture magic in a repeat of last year’s Ivy opener against Princeton 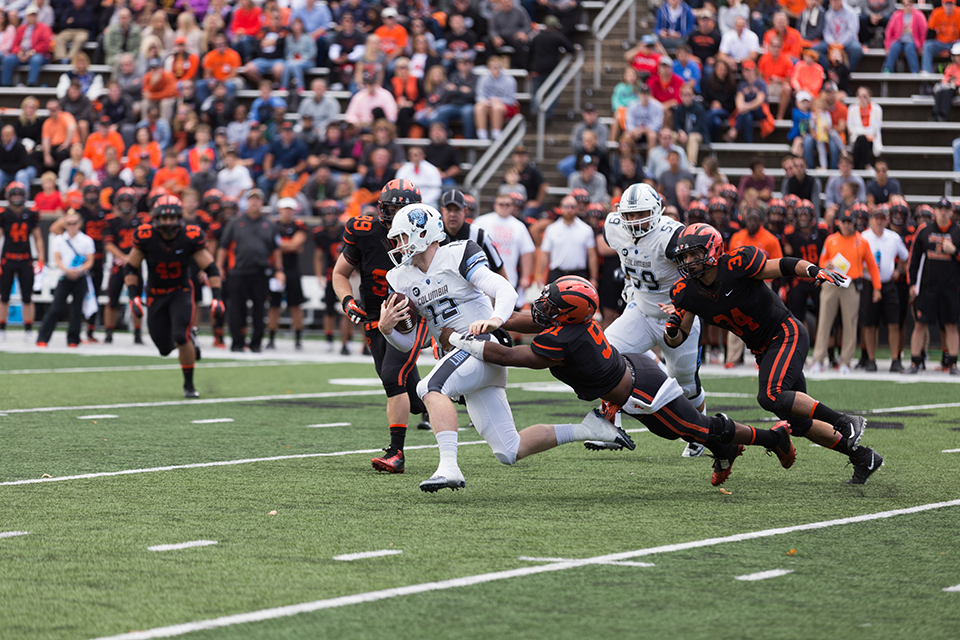 Football's victory last year at Princeton was season-defining, deserving of a look back in preparation for Friday's game.

With one minute and 20 seconds remaining in the fourth quarter, then-sophomore wide receiver Ronald Smith II breaks a tackle, leaving a splayed black-and-orange body in his wake. Smith splits the gap between two fellow Lions, barely edging out the final Princeton defender with any chance of catching him. Smith remains ahead of any Princeton player in a half-field foot race he knows he’ll win. The St. Louis native coasts into the end zone, giving the Lions a lead they won’t relinquish.

Coming into last year’s game against Princeton, football had beaten Wagner and Georgetown to start the season. The team’s first 2-0 start in 12 seasons gave it optimism, but even the most ardent of supporters were skeptical. Then again, Princeton possessed a 70-15-1 series advantage over Columbia going into the contest, having lost seven straight against the Tigers.

“We went into that game at 2-0, but we hadn’t played anyone proven yet,” junior cornerback Ben McKeighan said. “That game was really our coming-out party as a team.”

But on that day, head coach Al Bagnoli finally got a signature win at Columbia after two years of frustration amid an ambitious rebuild of a program that was mired in a 21-game losing streak when he was hired in 2015. Smith, a member of Bagnoli’s first full recruiting class at Columbia, was part of what offensive coordinator Mark Fabish called a “perfect storm” of factors that went the Lions’ way that day.

“When things started getting competitive, our kids answered the call,” Fabish said. “There was an expectation that we were going to win.

Football entered the final quarter with a surprising 21-17 advantage. Princeton had a history of beating up on the Light Blue, including a lopsided 48-13 defeat at Wien Stadium in 2016.

Since they’d conceded a touchdown midway through the fourth quarter, the Lions trailed Princeton 24-21 with less than two minutes remaining on the clock. It was third and six, and the Lions looked poised to convert; but then, Smith jumped offside. Flags flew, and the Lions had to move back five yards, a huge blow as they were still in their own half. The Light Blue would have an even more imposing third and 11 to convert.

Beyond the Princeton game, few expected anything out of the Light Blue last season. In the 2017 Ivy League football preseason poll, the media predicted the Lions would finish in seventh place. The Tigers, however, were projected to win the league, having secured the title in their 2016 campaign.

Adding to the gravity of the moment, coming into the 2017 season, the Lions hadn’t started the season with three straight victories since 1996, when they finished 8-2. That 1996 campaign would end up being its most successful season since 1961, when Columbia’s won its sole Ivy League title in football. A victory at Princeton would be exceptional and make this team one to remember.

With the game on the line, Fabish needed to dial up a play to continue the drive and get a first down. He got more than he bargained for.

On the third and long, the Tigers sent the house on a blitz, forcing now-graduated quarterback Anders Hill to pull the trigger early, hitting Smith on a quick slant route.

“Anders was hot off of that side where we didnt have a protector, almost blind,” Fabish said. “Anders found Ronald, as gifted and talented as he is, he was able to do the rest on his own, and then Ronald was out.”

Smith broke free on a 63-yard catch-and-run and scored with barely a minute left on the clock. Smith II got loose from single coverage on a slant over the middle and the rest was history.

“It felt amazing, feeling the first man fall off, and then being able to see all the space for me to run through,” Smith said. “Especially with the lead changes throughout the game, it was a great way to end the game.”

Even though the Lions now led by four, the Tigers still had the opportunity to fight back, with a minute remaining on the clock. However, the Light Blue defense stopped Princeton, forcing its third turnover by the game. McKeighan’s interception—his second of the day—came on a desperate third-down throw from Tiger quarterback Chad Kanoff.

“Look, I mean that was definitely Ben McKeighan’s coming-out tour,” senior safety Landon Baty said. “That game was so huge momentum wise just kind of establishing where we are as a team, where we are as a program.”

One of the Light Blue’s record-shattering performances came from Smith. Then in his sophomore campaign, Smith registered 10 catches for 236 receiving yards, a Columbia record which still stands. Smith also scored two touchdowns from Hill, who threw for an even 400 yards in that game.

It was not just the Columbia offense that impressed in the victory. The most crucial turnover came on a goal-line fumble recovery, preventing a Princeton touchdown that would have put it in front. McKeighan’s second pick sealed the victory for Columbia.

In the weeks after the Princeton game, the Lions would continue proving every critic wrong. Capping the season at 8-2, Columbia matched its best mark since 1996. The Light Blue finished in second place, and it defeated five of its seven Ancient Eight foes along the way—including Penn, against which the Lions, this time from junior wide receiver Josh Wainwright, pulled off another round of late-game heroics.

Starting the Ivy League season again this year against Princeton, the Lions come into the Friday night’s nationally televised contest undefeated, having once again defeated strong teams like Central Connecticut State and Georgetown.

While the Lions once again face 25th-ranked Princeton as an underdog, this time, there’s reason to believe.