Football looks to rebound in nonconference finale against Marist

Football looks to rebound in nonconference finale against Marist 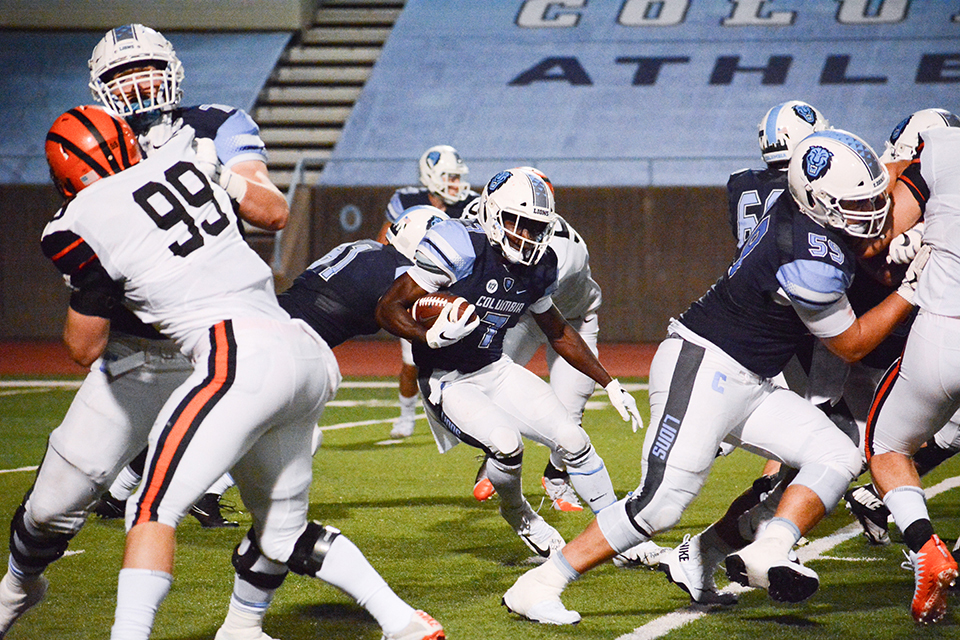 First-year running back Dante Miller will hope to pace the Light Blue's offense against Marist this weekend.

After its first loss of the season last week against No. 25 Princeton, football looks to recover this weekend as it hosts Marist. This is the last nonconference game for the Light Blue before six Ancient Eight games in a row.

In their conference opener, the Lions (2-1, 0-1 Ivy) struggled against a polished, nationally ranked Princeton. The Light Blue faces a less formidable opponent in the Red Foxes (1-3, 1-1 MAAC), who have floundered this season, winning only one of their four opening matches.

Last season, the Lions trounced Marist 41-17 in Poughkeepsie to mark their fourth win of the season. The highlight of that game came when former quarterback Anders Hill, CC ’18, connected with All-Ivy first team junior wide receiver Josh Wainwright for a 69-yard touchdown. This season, Wainwright came in as the integral skill player on offense, though he suffered an ACL tear in the first game of the season at Central Connecticut State. Wainwright has been ruled out for the year and underwent surgery this week.

In Wainwright’s wake, the Light Blue wide receiving corps has struggled to make plays, especially with a new quarterback leading the charge. Junior wide receiver Ronald Smith II, who scorched opposing defenses last season before getting injured, has led the team with 206 receiving yards on 17 catches. Senior wide receiver Kyle Castner has hauled in 10 catches, but only for 95 yards, with a meager 9.5 yards per catch so far this season.

Given last week’s offensive struggles, the Light Blue will primarily look to move the ball more, particularly with sophomore quarterback Josh Bean back in as the starter. The 213 yards that the Lions put up is their lowest so far this season. With Bean out for the last two weeks, sophomore quarterback Dillon Davis struggled to find consistency through the air, with two touchdowns and five interceptions.

On the ground, the Lions have had a running back by committee with first-year running back Dante Miller and junior Lynnard Rose. While Miller has only had one more carry than Rose, his output is far greater, with 5.7 yards per carry to Rose’s 3.2. However, Miller’s career-long 83-yard touchdown run against Central Connecticut has largely bolstered his numbers.

The Lions lost two more key players to injury last game. The first of these, senior safety Landon Baty, is, according to head coach Al Bagnoli, currently week-to-week with a right grade 2 MCL sprain. Additionally, junior linebacker Justin Woodley, diagnosed with a torn labrum, has been labeled out for this week. This bodes poorly for a Light Blue defense that gave up 540 yards against Princeton, with 360 of those coming on the ground.

“We were way too unsettled going into that game than you want to be,” Bagnoli said of his team’s performance last week. “We’ve had a lot of moving parts. It’s hard enough when you’ve had your complete roster, and they’ve played, to win these games. It becomes much more difficult when you’re having changes all over the place.”

Despite the abundance of injuries and inefficiency on both sides of the ball, the Lions are likely to feel confident knowing that Marist lost to Georgetown in its opening game of the season. Columbia handily dominated the Hoyas for the first three-and-a-half quarters in their showdown two weeks ago, and the Lions will hope to replicate that performance against the Red Foxes this weekend.

Kickoff on Saturday is slated for 1 p.m. at Wien Stadium.